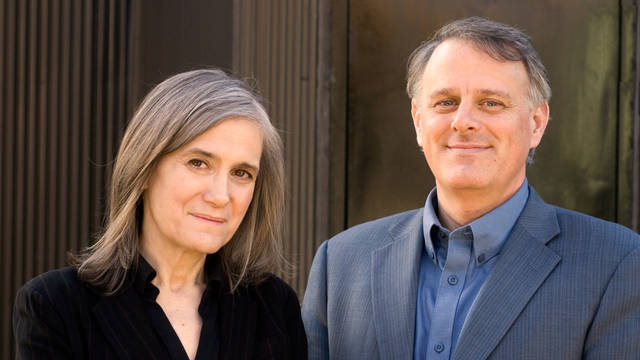 Legendary independent journalist I.F. “Izzy” Stone often cautioned, “All governments lie.” But even Izzy would have been dizzy with the deluge of lies pouring out of the Trump administration, including President Donald Trump’s claim that human-induced climate change is a hoax perpetrated by the Chinese to hurt the U.S. economy. Global warming has exacerbated recent catastrophic events from Houston to Miami to Puerto Rico and the U.S. Virgin Islands, and, now, to raging fires sweeping across California. The corporate TV weather reporting aids and abets Trump’s misinformation by consistently ignoring the role of climate change in this string of disasters.

This year’s hurricanes have struck with historic force. On our warming planet, with rapidly warming oceans, hurricanes occur with more frequency and more strength. The 10th hurricane this year, Ophelia, has just been named. There have not been 10 hurricanes in one season since 1893.

At least 82 people died when Hurricane Harvey slammed into the Gulf Coast, inundating Houston. The storm also led to millions of pounds of pollutants being released into the air and water by Houston’s sprawling petrochemical industries. Initial estimates for the rebuilding are currently about $190 billion.

Hurricane Irma killed at least 134 people, of whom 90 were in the United States, including 14 elderly residents who were trapped in a hot, flooded, blacked-out nursing home in Hollywood, Florida. AccuWeather’s founder and president, Dr. Joel N. Myers, said, “Also unprecedented is that this particular storm, Irma, has sustained intensity for the longest period of time of any hurricane or typhoon in any ocean of the world since the satellite era began.” His initial cost estimate for recovery from Irma, primarily in Florida, is $100 billion.

Hurricane Maria’s devastation of Puerto Rico and the Caribbean has yet to be fully assessed. Puerto Rico had its entire power grid destroyed. After three weeks, at least 85 percent of the island remains without electricity. The Federal Emergency Management Agency reported that 63 percent of the island’s 3.4 million residents have access to clean water, although that claim has not been independently verified. The official death toll on Puerto Rico alone at the time of this writing is 48, with scores still missing, but these are surely underestimates, as remote regions of the island have had very little contact with the outside world, and a new wave of serious infections related to poor sanitation are now afflicting people on the island. Even less is known about the Puerto Rican island of Vieques.

In the aftermath of the storm, San Juan Mayor Carmen Yulin Cruz waded chest-deep in floodwater, bullhorn in hand, helping people trapped in their homes and organizing rescue operations. Her repeated urgent calls for more help to stem the humanitarian crisis on Puerto Rico were rebuffed by FEMA chief Brock Long, who called her public cries “political noise.” Trump himself accused the mayor of being “nasty,” then engaged in a shockingly insensitive stunt during his short visit to the island, throwing rolls of paper towels into a crowd of hurricane survivors.

Across the United States, in California, over 20 wildfires are sweeping across the state. In Sonoma and Napa, fires have wiped out entire neighborhoods, turning thousands of homes into piles of smoldering ash and forcing the evacuation of tens of thousands. At the time of this writing, 21 people are confirmed dead from the fires, but hundreds are reported missing.

Scientists have found a direct link between climate change and the fires in California. Park Williams, bioclimatologist at Columbia University’s Lamont-Doherty Earth Observatory, said on the “Democracy Now!” news hour, “The amount of area that has burned due to human-caused climate change … is about half of the area of forest in the western U.S. that has burned over the last 35 years: the size of Massachusetts and Connecticut combined.”

When asked about the failure of network TV meteorologists to make the connection between extreme weather and climate change, Williams said: “The terms ‘global warming’ and ‘climate change’ have been politicized. But in the circles that I work with, with real climatologists who are working on these issues every day, there is no hesitation to use those terms. As you put greenhouse gases into the atmosphere, the globe warms, whether it’s the Earth or another planet. It’s just the law of physics. And so, it is surprising to see trained meteorologists on TV steer away from those terms.”

It is not only surprising. This massive omission reinforces the efforts of climate change deniers to confuse the American public and stall climate action. You have to ask, if we had state media in this country, how would it be any different?

President Trump has withdrawn from the Paris climate agreement. His Environmental Protection Agency administrator, Scott Pruitt, declaring, “The war on coal is over,” signed an order intending to rescind President Barack Obama’s Clean Power Plan, which would have curbed polluting power-plant emissions. The Trump administration’s lies about climate change are having real impacts today. More devastatingly, the lies all but guarantee a future filled with more and more deadly disasters.