In California, raging wildfires fueled by climate change have killed at least 40 people, destroyed thousands of homes and businesses and scorched more than 200,000 acres—roughly the size of New York City. The fires are now the deadliest in California since record keeping began. At least 100,000 people have been forced to evacuate, with about 75,000 people still displaced. Some residents had to flee for their lives, as drought conditions and powerful, erratic winds have contributed to the explosive spread of the fires. The fires have also contributed to a housing crisis, leaving thousands homeless in neighborhoods of California where rental prices were already sky-high before the blazes. We speak with Ro Khanna, Democratic congressmember from California.

AMY GOODMAN: I wanted to ask you about where you are now, Palo Alto, California, and, of course, the district you represent. I wanted to ask you about the fires, which we’re going to go into more deeply in our next segment with a UCLA climate scientist. But this year’s hurricanes striking with historic force, the 10th hurricane this year, Ophelia, just named. There haven’t been 10 hurricanes in one season since 1893. And then the uncontrolled wildfires raging where you are, across Northern California, including your district. At least 40 people killed, thousands of homes gone, hundreds of people still missing. Scientists finding a direct link between climate change and the fires, but the network TV meteorologists have barely uttered the words “climate change,” and President Trump says he’s withdrawing the U.S. from the landmark Paris climate accord. Congressmember Khanna, what do you think needs to be done right now?

REP. RO KHANNA: Well, it’s heartbreaking. As I landed back home, you could actually smell the smoke, landing into San Francisco airport. And the stories of elderly couples, some of them who have passed way because they couldn’t evacuate. We know, in part, the cause of these fires. The Diablo winds, coupled with extreme heat in the summer, has led to some of the biggest fires in California history. Now, scientists may not say definitively that climate change caused the Diablo winds or the extreme heat conditions, but what they will tell you is these are the types of extreme climate conditions that lead to tragedy. And we ought to take heed and say we want to prevent these type of extreme climate conditions here in California, going forward, given that we see the extraordinary, devastating impact.

Look, I represent Silicon Valley, a place of extraordinary technology. But these type of events are reminders of our own—the limits of human power, the sense that nature and the planet still matter. And they should give us a sense of humility that we should not chance the fate of the planet, that we can’t control the environmental catastrophes caused by extreme climate conditions.

AMY GOODMAN: We’re going to go to this more extended discussion in a moment, but I did want to ask you about Kevin de León, the California Senate pro tem, announcing yesterday that he will be running for Senator Dianne Feinstein’s seat, running against her. Your thoughts on this, saying he’s going to represent a wing of the party that has been really iced out?

REP. RO KHANNA: Well, I had called for a challenge to Senator Feinstein. She has been wrong on the major issues of our time. She was a supporter of the war in Iraq. She has supported a neocon-neoliberal interventionist foreign policy in Libya or increasing troops in Afghanistan. She was for the extension of the PATRIOT Act and for mass surveillance, and worked with Republicans to have that mass surveillance. We need someone who is going to be for a progressive foreign policy, who is going to stand up for civil liberties. And I think Kevin de León can certainly do that. There may be others who enter. But I just think California is one of the most innovative, progressive places, and we need someone who is going to articulate those values.

AMY GOODMAN: Ro Khanna, we want to thank you for being with us. Have you formally endorsed him?

REP. RO KHANNA: I have. I have endorsed Kevin. I think he has done terrific work on the environment, and he has done terrific work on healthcare for all. But like I said, my bigger theme is—I like Kevin. I’m supporting him. But I want to see new progressive ideas come forward from California. And I respect Senator Feinstein, but she’s just been wrong on some of the biggest issues of our time. And given my own perspective on foreign policy and civil liberties, I don’t think she’s the right voice for California, going forward.

AMY GOODMAN: Well, Ro Khanna, I want to thank you for being with us, Democratic member of Congress, recently co-authored an op-ed, that we’ll link to, called “Stop the Unconstitutional War in Yemen.”

When we come back, climate change and the wildfires of Northern California. Stay with us. 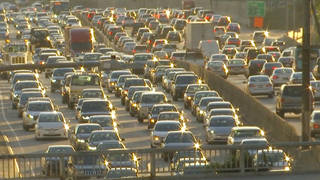