Guantánamo Bay detainees who are on hunger strike have accused officials of a sudden change in practice that could result in them starving to death, as doctors threaten to stop force-feeding them and are no longer monitoring their medical condition. We speak with Clive Stafford Smith of Reprieve, which represents eight of the 41 Guantánamo detainees. Reprieve is urging supporters to join a solidarity hunger strike with the detainees. Among those participating are British Labour Party MP Tom Watson, Pink Floyd co-founder Roger Waters, comedian Sara Pascoe, director Mark Rylance and French-born actress Caroline Lagerfelt.

StoryNov 08, 2022Alaa Abd El-Fattah’s Sister Speaks Out at U.N. Climate Summit as Pressure Grows on Egypt to Free Him

AMY GOODMAN: That’s Roger Waters performing, here at Democracy Now!, “We Shall Overcome,” accompanied by the high school student Alexander Rohatyn on his cello. Waters led the Countdown to Close Guantánamo campaign on behalf of prisoners at the U.S. naval base in Cuba. This is Democracy Now! I’m Amy Goodman, with Nermeen Shaikh.

NERMEEN SHAIKH: We turn now to Guantánamo, where hunger-striking prisoners say U.S. military officials have threatened to stop force-feeding them and are denying them basic medical care, in a move the prisoners and their lawyers say threatens to kill them. In an op-ed for The Guardian, hunger-striking Guantánamo Bay prisoner Khalid Qassim writes, quote, “They have decided to leave us to waste away and die instead. … Now as each night comes, I wonder if I will wake up in the morning. When will my organs fail? When will my heart stop? I am slowly slipping away and no one notices,” end-quote.

Qassim has been in prison for 15 years without being charged with a crime, and writes that a hunger strike was, quote, “the only peaceful way I thought I could protest.” He is one of 41 men remaining in Guantánamo. Ten were charged or convicted before a commission, but the rest are being held in indefinite wartime detention without trial.

AMY GOODMAN: Human rights lawyers have long opposed force-feeding in Guantánamo, saying the brutal way it’s implemented is akin to torture. But those same lawyers say they oppose the sudden suspension of feedings and basic medical care, since their clients’ health is precariously declining and such care may mean the difference between life and death.

For more, we go to London, where we’re joined by human rights lawyer Clive Stafford Smith, founder and director of the international legal charity Reprieve, which represents eight Guantánamo prisoners.

Clive Stafford Smith, welcome to Democracy Now! Why don’t you lay out what’s happening? What people may remember during the Obama years is the force-feeding that prisoners called inhumane. They called it torture. Now explain what’s happening.

CLIVE STAFFORD SMITH: I will. And good morning to everyone. Back under President Obama, we had force-feeding, which—there’s a large swath of the medical community that says that that’s unethical per se. But the way it was done and is done in Guantánamo Bay is gratuitously painful. General Bantz Craddock said in The New York Times that they were making it “inconvenient”—his word—by making it more painful.

Well, just recently, starting on September the 20th, we learned that President Trump’s team down there have added a pernicious twist. So what they’re doing now is they’ve stopped force-feeding the prisoners, for now, and they’ve said to the prisoners that the prisoners can go forward and they can starve themselves, until their organs fail, until they get serious mental illness, until they go blind. And at that point, they’re going to start force-feeding them again to stop them from actually dying. So they wait until they’re half-dead, and then keep them half-alive and then keep them forever, at the cost of $11.8 million per prisoner, in Guantánamo Bay.

NERMEEN SHAIKH: What’s the justification for that? I mean, why do this to them now?

CLIVE STAFFORD SMITH: Well, the reason behind this, I’m afraid, is they’re trying to coerce the prisoners out of their peaceful protest. And, you know, this is just wrong. Imran Khan, the well-known Pakistan politician, who is a strong supporter of Ahmed Rabbani, one of my clients, has written in The Washington Post today that there’s a long tradition that we, as Americans, have fro peaceful protest. And the idea that the Trump administration would try to bully these guys, who have been on hunger strike for four years asking for just one thing—you know, give me freedom, or give me a fair trial—that they should use this sort of medical malpractice to bully people out of it is just disgusting.

AMY GOODMAN: So, tell us the story of your clients, Ahmed Rabbani and Khalid Qassim if you can quickly tell us, to give us a sense of who are these 41 men who remain languishing at this U.S. prison in Cuba.

CLIVE STAFFORD SMITH: So, there are 41 people, at a cost of $500 million, that could be well spent on something else. Of those, 15 of them are potentially going to have some form of trial, fair or unfair, in Guantánamo Bay. And the rest are forever prisoners who aren’t going anywhere. And some of them, instead of being high-value detainees, are, by definition, low-value or no-value detainees.

Let me just tell you about Ahmed Rabbani. Ahmed—and this is all corroborated in the Senate CIA torture report. Ahmed was originally sold to the U.S. for a bounty by the ISI, who said he was a really bad dude called Hassan Ghul. When they got him, Ahmed said, “No, I’m not. I’m a taxi driver from Karachi.” And indeed, in the Senate report, it says, “You know, this is what he says. We don’t believe him.” He then spent 545 days in the dark prisons of the CIA torture process, including being exposed to strappado, an old torture that was done by the Spanish Inquisition. And, you know, what did they get for that? Absolutely nothing, except they abused this poor guy beyond measure. He was then taken to Guantánamo Bay, where he patiently waited for his release back to his wife and son, who was only 19 months at the time he was detained. And then, after losing patience, in 2013, he decided, “What can I do?” He went on a hunger strike. He did that, and then he was force-fed. And he’s been force-fed for four years. And I’ve seen him down there. He is now 92 pounds, if you can believe it. He is just a shadow of his former self. And there he is.

NERMEEN SHAIKH: So, you say that Ahmed Rabbani now weighs 92 pounds. So at what point will he start being force-fed again? Because the idea is, as you pointed out earlier, that they don’t actually want these people to die.

I spoke with him yesterday in a legal phone call, this privileged call I had with him, and he’s not sounding good. And indeed there’s a whole syndrome, a medical syndrome, of hunger strikers. When you lose thiamine, you begin to get psychotic. You begin to get to where you can’t make voluntary and competent decisions. And what I’m afraid—I mean, none of these guys want to die. They just want justice. But what I’m afraid, with Ahmed, is he’s getting beyond the point where he can make sensible decisions, and he just might end up doing something really stupid and ending up dying down there.

CLIVE STAFFORD SMITH: Sure. Well, look, let me first say I don’t want any of you to hurt yourself medically, and perhaps you shouldn’t be quite as stupid as I am sometimes. I did five days of a solidarity hunger strike, just because I think it’s really important when I talk to my clients that I can say, you know, “We will take on your protest for now. I just want you guys to eat a little bit to keep yourself alive, while we sue to stop this nonsense.” And we did sue this week, and I hope to goodness the judge is going order the government to behave themselves properly.

Now, in terms of what we want, if I may, I’ve got some notes from yesterday. And, you know, this is the message that Ahmed Rabbani has for President Trump. This is a quote: “What is the benefit of keeping this place open? They’re spending over $500 million a year on this place. They could have saved the money, sent us away, whatever, and not have this headache. Show mercy, President Trump, if there is any in your heart. Use the money to give to your soldiers, your people, not wasting it here. Help the poor people. Help the needy in the U.S. You’ve got fires in California, hurricanes. Use the money for that.” Really, look, either just set them free, or do what we’ve done in America for the last 200 years, which is give them a trial. And I would love to have that trial. I don’t think the government would. And then we’d get them out.

AMY GOODMAN: Well, Clive Stafford Smith, we want to thank you so much for being with us, human rights lawyer, director of Reprieve, which represents eight Guantánamo prisoners.

That does it for our show. Juan González will be speaking at Princeton today at noon. I’ll be speaking on Saturday in California. We’ll be broadcasting from Marin on Friday.

Alaa Abd El-Fattah’s Sister Speaks Out at U.N. Climate Summit as Pressure Grows on Egypt to Free Him 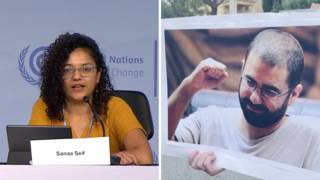 Alaa Abd El-Fattah’s Sister Speaks Out at U.N. Climate Summit as Pressure Grows on Egypt to Free Him