Ai Weiwei has been named the most powerful artist in the world by ArtReview magazine. He’s also been called the most dangerous man in China. The world-renowned artist has a major new exhibition opening in New York City, in which he’s erecting security fences and cages across the boroughs—including under Washington Square Arch and in Central Park near Trump Tower—to explore the rise of nationalism and the closure of borders worldwide. It’s called “Good Fences Make Good Neighbors.” For more, we speak with award-winning artist and activist Ai Weiwei.

AMY GOODMAN: This is Democracy Now!, democracynow.org, The War and Peace Report. I’m Amy Goodman. We’re joined by Ai Weiwei for Part 2 of our conversation, world-renowned Chinese artist and activist, director and producer of the new documentary Human Flow, also has a major new exhibition opening here in New York in which he’s erecting security fences and cages across the boroughs to expose the rise of nationalism and the closure of borders worldwide. It’s called Good Fences Make Good Neighbors.

Ai Weiwei, thank you for staying with us. Explain this project, that’s under the Washington—the arch in Washington Square Park, that’s near Donald Trump, his house.

AI WEIWEI: Yes, we started making this project about a year ago, and there’s about 300 locations all over the city, in five boroughs, in many, many different structures, some bus stops, some posters or light pole banners, and all over the city, and some major installations such as the Washington Square Arch or Doris Freedman Plaza, which is blocks away from Trump’s tower. And—

AMY GOODMAN: Explain what that is, the one near Trump Tower.

AI WEIWEI: That’s a—if I use simple words, it’s like a golden cage. It uses fences to build a cage there. And it looks beautiful and, you know, will attract a lot of attention about the issues.

AMY GOODMAN: Is it gold for a reason?

AI WEIWEI: I know our president likes gold, and so this is really for his appreciation.

AMY GOODMAN: It’s in the southeast corner of Central Park?

AI WEIWEI: Yes. It’s about in front of Plaza Hotel.

AMY GOODMAN: Which he owned. What about what’s in Washington Square Park? Describe what’s under the arch.

AI WEIWEI: It’s under this landmark arch. This is another cage, which is built of silver color. And it has a passing way. You can go in through the passing way of polished mirrors. And it’s a nice element there.

AMY GOODMAN: And explain the role of Marcel Duchamp, the French artist.

AI WEIWEI: Yes, the shape of the door, the passage door, has come from Marcel Duchamp’s early artwork. It’s like two men holding each other. You know, it’s a shadow kind of image. And Marcel was in the Washington Square quite often. You see photos of—early photos. And there’s a chess club. He’s a very famous chess player. So…

AMY GOODMAN: And you also have an exhibit in Berlin, where you collected 14,000 life vests? Can you explain?

AI WEIWEI: Yes. In Lesbos, the mayor asked me to do a—

AI WEIWEI: Yeah, Greece—asked me to do a monument for those refugees, which about over 500,000 refugees come through that little island. So, he said he can donate me this 150,000 life jackets. So I used those jackets to construct many, many installations in Europe, in Berlin and in Denmark and many other locations, like Austria. And they’re just to remind people what is happening in the world. You know, those life jackets are worn by the refugees. Some are alive, some are dead. And those all picked up on the shore, you know, so…

AMY GOODMAN: And I want to end—I know you’re racing off to another interview. You’re sought after by so many, in so many ways. But on the border in the United States, where you went for Human Flow, your new documentary, and what the building of the wall, which President Trump just reproposed in the last 24 hours, means to you?

AI WEIWEI: I think to building a wall, any kind of wall, is ridiculous. China, 2,000 years ago, built the Great Wall of China. It never really worked. It really shows a kind of narrow-minded ideas about to divide people and to build some kind of hatred between people.

AMY GOODMAN: Ai Weiwei, thank you so much. Ai Weiwei, world-renowned Chinese dissident, artist and activist. ArtReview magazine has called him the most powerful artist in the world. He uses a wide range of media, from architecture to installations, social media to documentaries. To see Part 1 of our discussion, go to democracynow.org. I’m Amy Goodman. Thanks for joining us. 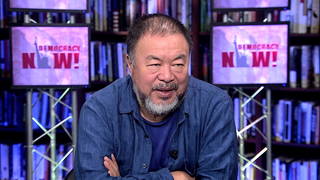