A shocking new investigation by the ACLU of Texas and The Intercept reveals how state troopers are essentially acting as deportation officers. After poring through public records of traffic stops by the Texas Highway Patrol, the ACLU of Texas uncovered what amounts to a deportation machine operated by the state’s Department of Public Safety. State troopers stop drivers for minor traffic infractions, and if they are unable to produce a driver’s license, they are taken into custody and turned over to Border Patrol. Several DPS dashboard camera videos show immigrants being detained for trivial traffic violations and then carted away by Border Patrol. We speak with Debbie Nathan, investigative reporter for the ACLU of Texas.

NERMEEN SHAIKH: We end the show in Texas, where a shocking new investigation has revealed how state troopers are essentially acting as deportation officers. After poring through public records of traffic stops by the Texas Highway Patrol, the ACLU of Texas has uncovered what amounts to a deportation machine operated by the state’s Department of Public Safety, or DPS. State troopers stop drivers for minor traffic infractions, and if they are unable to produce a driver’s license, they’re taken into custody and turned over to Border Patrol. The Intercept, working with the ACLU of Texas, obtained several DPS dash cam videos that show immigrants being detained for trivial traffic violations and then being carted away by Border Patrol.

This is a clip from a video produced by The Intercept of dash cam video of a traffic stop, and features Debbie Nathan, investigative reporter for the ACLU of Texas, our guest today.

TEXAS STATE TROOPER: I’m at a traffic stop. Can you send a Border Patrol agent over here?

DRIVER’S WIFE: No, they’re going to take him, sir! They’re taking everybody!

TEXAS STATE TROOPER: Who said that?

DRIVER’S WIFE: Everybody’s saying that. They’re taking everyone and deporting them!

DEBBIE NATHAN: When the dash cams started coming in, I realized, “Wow! This is really a record of a deportation machine, of state troopers fishing for people on the highways and then turning them in to federal immigration officials.”

AMY GOODMAN: For more, we are joined by Debbie Nathan, investigative reporter for the ACLU of Texas, her report for The Intercept headlined “’They’re Taking Everybody’—Videos Show Texas Troopers Ripping Apart Immigrant Families During Traffic Stops.”

Debbie, welcome to Democracy Now! I’m glad you’re in New York today to explain what is happening in Texas and what you found, right where you live.

DEBBIE NATHAN: I live in Brownsville, Texas, which is right on the border, at the easternmost part of the border. It’s a 1,200-mile border that goes all the way to El Paso. And for the past three years, the state of Texas has been funding, mega-funding, to the tune of like—right now it’s like $800 million a year, to have like a lot of state troopers down on the border. They’re like brought in on tours. And they are empowered to stop people on the roads, as they traditionally have, doing traffic enforcement.

So, in the course of stopping people on the border, for things like broken taillights or failing to signal when they do a lane change, they ask for their driver’s licenses. Now, in Texas and many other states for the past few years, it’s been impossible for undocumented people to get driver’s licenses. Well, they have to drive. I mean, there’s really no public transportation, and people have to go to work. So they drive, and they don’t have licenses. And it becomes sort of like sort of the opposite of a star on your sleeve, like not to have something. As soon as they say they don’t have a driver’s license, it triggers a call from the trooper to the Border Patrol. And the Border Patrol, there are, you know, thousands of them on the Texas border, so they’re usually just a few minutes away, and they arrive quickly. And—

AMY GOODMAN: Are they interrogating them?

DEBBIE NATHAN: Well, the troopers are not supposed to do that, but they start the interrogation, and then the Border Patrol finishes it up. They have the legal right to do that, once they arrive. But the interrogations often start, you know, when the troopers encounter the person. And I’ve seen—there’s one video in The Intercept piece where a man tries to exercise his Fifth Amendment right not to say why he doesn’t have a driver’s license. And he’s very much verbally abused—in a similar manner, actually, to the Sandra Bland encounter. These are the same agents. But, you know, it was my sense, from looking at a lot of these videos, these dash cam videos that I got from the troopers, that, you know, I mean, even though that behavior is supposed to be really unacceptable, and they fired the agent who did it to Sandra Bland, it’s allowed on the border with immigrants.

DEBBIE NATHAN: Well, it’s my impression, from looking at data—and I only have data that goes back about two years—and from hearing anecdotes from people in the community—and I’ve been down there one year—but people talk about this having happened in the last few years, but it was always sort of touch and go, because many times when I speak with people, and they say, “Well, you know, I used to get stopped, and they would ask me if I had my driver’s license, and I didn’t, and they would just let me go.” And that seems to be almost what the custom was until about a year ago.

Now, a year ago, just a couple of days before the presidential election, DPS put out a memo to all of its staff saying, “You have an obligation to call the Border Patrol when you suspect that someone is undocumented. You have an obligation.” I actually heard from somebody like a whistleblower in the Department of Public Safety, the troopers, that that had not been the custom or the obligation prior to the letter. So, now it seems like they have to do it.

NERMEEN SHAIKH: Well, one of the people whose case you investigated was Ruth Ramirez. She was subjected to a traffic stop because of the tint in the windows of her truck, which were apparently too dark. She was turned over to Border Patrol, and you found her in Juárez, Mexico. This clip is from an interview you had with her, as you showed her the dash cam video of her traffic stop.

RUTH RAMIREZ: [translated] I would simply describe it as the worst moment of my life.

DEBBIE NATHAN: [translated] To be handcuffed?

RUTH RAMIREZ: [translated] To be handcuffed, to be embarrassed, to be humiliated—for no apparent reason.

DEBBIE NATHAN: [translated] But you were stone-faced.

RUTH RAMIREZ: [translated] Yes, because he had already had enough triumph to have turned me in to immigration. I wasn’t going to hand him the triumph of seeing me shed tears.

TEXAS STATE TROOPER: Now, this is starting to get old, man. Maybe I should have joined the Border Patrol.

RUTH RAMIREZ: [translated] It’s very clear that, to him, we undocumented people are like a trophy. He was making fun of destroying a family.

NERMEEN SHAIKH: So that’s Ruth Ramirez speaking in one of the videos that you produced. Could you say, very quickly, Debbie Nathan, what happened?

DEBBIE NATHAN: She ended up in a deportation center, not far from the reporter who you just interviewed, and she ultimately went back to Mexico. And she has three U.S.-citizen, U.S.-born children who accompanied her, and a DACA-age child, who was just applying for DACA. They’re all back in Mexico now.

AMY GOODMAN: We’re going to leave it there, but congratulations on your very important work, and we’ll continue to follow it. Debbie Nathan, investigative reporter for the ACLU of Texas. We’ll link to her report in The Intercept headlined “’They’re Taking Everybody’—Videos Show Texas Troopers Ripping Apart Immigrant Families During Traffic Stops.”

And this breaking news: South African anti-apartheid activist, former head of Greenpeace International, Kumi Naidoo, has been named the next secretary general of Amnesty International. 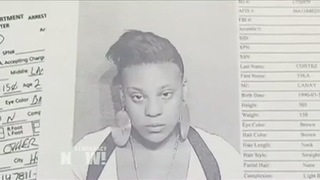