On Tuesday, Senate Democrats managed to delay a vote on Jeff Sessions’s nomination for attorney general. The move comes amid continued protest against Jeff Sessions over his history of opposing the Voting Rights Act and his history of making racist comments. On Monday, about 10 members of the NAACP, including President Cornell William Brooks, were arrested at a sit-in at Sessions’s office in Mobile, Alabama. It was the second NAACP sit-in against Sessions’s confirmation where Brooks and others were arrested. For more, we speak with Reverend Jesse Jackson, founder and president of Rainbow/PUSH and a Democratic presidential candidate in 1984 and 1988.

AMY GOODMAN: We spend the rest of the show with a civil rights leader who’s been at the forefront of the movement for equality for decades: Reverend Jesse Jackson. I caught up with the two-time Democratic presidential candidate at the Women’s March in Washington, and now he joins us here in New York.

AMY GOODMAN: We just have a few minutes, and then we’re going to do Part 2 of this discussion. But let’s focus right now on Jeff Sessions and the opposition to him. They’ve put off the vote on him until today. The head of the NAACP just got arrested again this week with scores of others.

REV. JESSE JACKSON: For all the right—for all the right reasons. He represents a constriction of democracy. You know, in 1965, blacks didn’t have the right to vote for 85 years. White women couldn’t serve on juries. Eighteen-year-olds could not vote, though serving in Vietnam. You couldn’t vote on campus. You couldn’t vote bilingually. He calls the intervention of the Supreme Court to protect people’s rights as intrusion. He also called the ’54 decision to end segregation as a matter of law an activist court. So, he would be a dangerous person to be over at Justice.

AMY GOODMAN: And the significance of Sessions being questioned by—well, you had Cory Booker, the first time a sitting senator challenged a sitting senator before the Senate Judiciary Committee in a confirmation hearing; John Lewis, you know, one of the most respected congressmembers, longtime civil rights activist; as well as Congressmember Cedric Richmond, who questioned why these three men spoke not at the beginning of the hearing, as is customary when senators or congressmen address a committee—

AMY GOODMAN: —but at the end, saying, “We feel like we’re at the back of the bus.”

REV. JESSE JACKSON: Well, they were. And after all, Sessions—it’s not enough to call him like racist, but some combination of Federalist Society and the Confederates. He has a point of view about women and labor and people of color, and it’s a very dangerous point of view. And it is the most powerful job in the country, just like Tillerson, the most powerful job, as secretary of state, outside the country. It would stick a knife in the crown jewel of Dr. King’s work, inhibiting the protected right to vote.

AMY GOODMAN: So, what do you think should happen? The vote has not yet taken place. You’re a man who’s long engaged in civil disobedience, not to mention other kinds of protest.

REV. JESSE JACKSON: Well, I think the senators have an obligation, one, to stand tall against his nomination. Those—even those Republicans who dare see a one big tent democracy, those who see the world through a door, not through a keyhole, even they have an obligation to break ranks, because they cannot justify their ignoring his record to vote for him in the name of—they cannot choose party unity over patriotism or what’s good for the country.

REV. JESSE JACKSON: Well, we should get beyond the name calling. Obviously, John Lewis is about action and change. We are a better nation because of the sacrifice of John Lewis and Hosea Williams and James Orange and Dr. King. We are a bigger, better nation because of their involvement. And that all is right now on the chopping block. And so it’s a dark period, but we must not surrender our spirits.

AMY GOODMAN: Your response to the choice of Neil Gorsuch to be the next Supreme Court justice?

AMY GOODMAN: And finally, the Muslim ban, people protesting all over the country right through today?

AMY GOODMAN: Well, Reverend Jackson, I want to thank you for being with us. Well—

REV. JESSE JACKSON: And it is a ban.

AMY GOODMAN: So you agree with Donald Trump and Sean Spicer on that one. 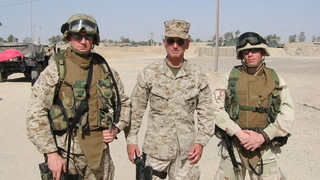