A new investigation by Univision shows how President Trump’s senior White House policy adviser, 31-year-old Stephen Miller, was well known at his Santa Monica High School for heckling his fellow Hispanic classmates, including telling them to speak only English. He’s now best known as one of the architects behind Trump’s Muslim travel ban. For more, we speak with one of Miller’s former classmates, Cynthia Santiago, the first Latina president of the school’s Associated Student Body and now an immigration defense lawyer who has been helping people impacted by Trump’s travel ban. We also speak with Univision reporter Fernando Peinado. His recent piece is titled “How White House advisor Stephen Miller went from pestering Hispanic students to designing Trump’s immigration policy.”

StoryDec 28, 2016George W. Bush’s Ethics Lawyer: Trump Will Be in Violation of Constitution on Day One

STEPHEN MILLER: The end result of this, though, is that our opponents, the media and the whole world will soon see, as we begin to take further actions, that the powers of the president to protect our country are very substantial and will not be questioned.

Mother Jones reports Miller’s central role in the Trump administration has been drawing praise from white nationalist leader Richard Spencer, who famously coined the term “alt-right” to describe the insurgent right-wing movement that’s attracted white nationalists and supremacists. Spencer told Mother Jones last year, quote, “Stephen is a highly competent and tough individual. … So I have no doubt that he will do a great job,” unquote.

Prior to serving as top aide to Trump’s presidential campaign, Stephen Miller worked as a former staffer for then Republican Senator Jeff Sessions of Alabama, the new attorney general, who has a record of opposing the Voting Rights Act, supporting anti-immigration legislation and making racist comments.

Fernando and Cynthia, welcome to Democracy Now! Fernando, let’s begin with you. Why did you take on this as a subject for Univision?

FERNANDO PEINADO: Well, as you can imagine, for us, immigration topics are very important, but that our audience wants to know. And, well, it turns out that Mr. Miller, he went to this high school in Santa Monica, where he studied—he woke up politically and developed his hard-line positions. At that time, he started writing in articles for the student newspaper and other local newspapers. He contributed to radio—conservative radio shows. And in this high school, it turned out that the Latinos are the most important minority. So, we decided to take a look into—a closer look into those years and talk to students who knew him.

AMY GOODMAN: And talk about what you found. Univision obtained a video made by four of his high school classmates for an audio-visual production class at the time. The video contains fragments of a brief 90-second speech by Miller during his junior year at Santa Monica High School in the spring of 2002, including a controversial reference to the job of janitors.

STEPHEN MILLER: I’m Stephen Miller. Some of you may or may not know who I am. We don’t have time to get into that right now. … I’m the only candidate up here who really stands out. … I will say and I will do things that no one else in their right mind would say or do. … Am I the only one who is sick and tired of being told to pick up my trash, when we have plenty of janitors who are paid to do it for us?

AMY GOODMAN: That was Stephen Miller speaking in his junior year at Santa Monica High School in 2002, now Donald Trump’s senior White House policy adviser. Comment on what he said, Fernando, that quote, if you could go ahead.

FERNANDO PEINADO: OK. I talked with one of his—his best friend at the time, Chris Moritz. He said it was just a joke. But actually, he made that comment before around 2,000 students in the amphitheater of the school. And many students I interviewed, they said that this comment was perceived as offensive, because the janitors were all people of color. It turned out, students that I interviewed, they described Miller as a provocateur. Some said that he enjoyed offending people. And some even described incidents, altercations, in which Miller said things like “Speak English. This is America,” to students who spoke Spanish in the hallways. And that’s what they told me.

AMY GOODMAN: Cynthia Santiago, when did you come to know Stephen Miller? Talk about his views in high school, your experience of him there, and what you’re seeing today, with him in one of the highest positions in the White House, advising President Trump.

CYNTHIA SANTIAGO: Yes. When I was in high school, about my junior year, which is the same junior year of 2002, I first came across an article that he had written for a local newspaper. And in that article, he made reference to Latino students, that he basically said “lacked basic English skills.” And in that same article, he made a reference that there was some causal link, that the reason—that would be the reason why these Latino students were not in the honors classes. He pointed out that there was a small number of Latino students in honors classes, and therefore it was because of their lacking basic English skills. These comments were very degrading, because he didn’t—he made an overgeneralization. He didn’t make a—he didn’t make a link, or he didn’t even try to address the issues of academic inequality and disparity in access to those classes.

AMY GOODMAN: Can you elaborate on that?

CYNTHIA SANTIAGO: —he would use generalizations of people.

AMY GOODMAN: Cynthia, can you elaborate on that, about the issue of speaking English only and his views on this, what he talked about in high school?

CYNTHIA SANTIAGO: So, in high school, I was also a member of Movimiento Estudiantil Chicano/Chicana de Aztlán. It’s MEChA. And it promoted cultural heritage and pride in your background, but it also promoted, you know, an access to higher education. And he was known to go to those meetings and stand outside and harass some of the members that were trying to leave those meetings. So, you know, I believe that the statements about English only were because he viewed these groups, the groups of pride and heritage, as being groups that, you know, didn’t promote American values.

AMY GOODMAN: Can you talk about a speech he gave—I think you were on the stage at the time of this speech—when he ran for election in Santa Monica High School?

CYNTHIA SANTIAGO: Yes. So, I was a candidate for the student body president, and I was also on stage. And when he said the speech, immediately students were reacting to him. And you can tell that in the video, that students were booing, and students were getting louder to—because they were extremely, you know, upset about this kind of a statement, because a lot of students perceived these as statements of racist—as racist statements, because they—the janitors at our campus were individuals—you know, Latino and African-American janitors. It also, you know, sparked—

AMY GOODMAN: For those who couldn’t quite hear the video I just—at the end of that clip that we played, Stephen Miller said, “Am I the only one sick and tired of being told to pick up our trash, when we have plenty of janitors who are paid to do it for us?”

CYNTHIA SANTIAGO: And generally, most students also felt, you know, even though we were teenagers, that we viewed our custodians, our janitors on campus, as people deserving of dignity and respect. And those statements were not—you know, they were quite the contrary of what you would treat staff and individuals and human beings.

STEPHEN MILLER: Right now, as a result of the president’s order, greatly expanded and more vigorous immigration enforcement activities are taking place. It is true that Operation Cross Check is something that happens every year. But this year, we’ve taken new and greater steps to remove criminal aliens from our communities.

AMY GOODMAN: Before we go back to Fernando, I wanted to ask Cynthia—what you’re doing now, what, 15 years after high school, is you are involved in challenging what many have called, including President Trump, the Muslim ban, this what Stephen Miller has so clearly defended and, many say, helped to craft. Your thoughts?

CYNTHIA SANTIAGO: Yes. It’s very unsettling that a person with these types of views, or a person, you know, that expressed these views many years ago, and still seems to express them, is in a position of authority. And if he was part of that team that crafted this, this is unsettling, because it truly doesn’t represent a person who values what it is, the balance of power, rights in this country, the branches of government. And so, it is unsettling and frightening that someone could be in a position as he holds, without some extreme vetting, extreme vetting to determine if he’s able to be in that position, given all his views.

AMY GOODMAN: And finally, Fernando, what radicalized him? He talks about reading the works of Wayne LaPierre of the National Rifle Association. What was your sense, from what you found?

FERNANDO PEINADO: Well, my sense, from what I found, is that he caught the attention of well-known conservatives nationally. And he spoke of them as mentors. So I guess he was encouraged by these well-known figures to follow this path. But, well, he has said that it was this reading about the Second Amendment, about gun rights, that made him discover these ideas. And then, the thing is, he studied writing a lot. He paid a lot of attention to issues of race and culture. He started this war against multiculturalism, and he started advocating for assimilation, total assimilation. He finds it un-American to express other identities that are—that he doesn’t perceive as American, that he seems—he perceives them as foreigner—as foreign.

AMY GOODMAN: Fernando Peinado and Cynthia Santiago, we thank you both for being with us, Fernando with Univision. Cynthia attended Santa Monica High School with Stephen Miller, currently an immigration defense attorney in Los Angeles. 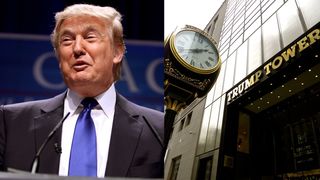