According to a Bloomberg investigation, the general counsel for Steven Cohen’s infamous investment firm oversaw some of the Trump transition team’s staff picks for the Justice Department in November. Cohen’s firm, SAC Capital, was the subject of one of the biggest insider trading investigations in Wall Street’s history. This fascinating history is chronicled in New Yorker staff writer Sheelah Kolhatkar’s book “Black Edge: Inside Information, Dirty Money, and the Quest to Bring Down the Most Wanted Man on Wall Street.”

AMY GOODMAN: We’ll be going to Stockholm in a moment, but first we’re continuing with Sheelah Kolhatkar, staff writer at The New Yorker and the author of “Black Edge: Inside Information, Dirty Money, and the Quest to Bring Down the Most Wanted Man on Wall Street.” Explain the term “black edge,” Sheelah.

SHEELAH KOLHATKAR: So, it’s important to understand that hedge funds are driven by information. And if you’re trading in the stock market each day on a kind of a short-term, speculative basis, the better the information is that you have, the more money you’re going to make. That’s the general philosophy. So, everyone is out there trying to get good, usable information. Inside the hedge fund that I write about a lot in this book, SAC Capital, you know, they had different categories of information. There was white edge, which is publicly available information that anyone can get, like information that is in an SEC filing that a company makes—not very useful to a trader, because everyone already has that. There is grey edge, which is in the grey zone. It might be something that an executive at the company told you, but it wasn’t entirely clear what they meant. You’re not quite sure. You’re sort of—you might have to talk to your legal counsel before you can trade on that information. And then there’s black edge, which is clearly material, nonpublic information, inside information—for example, access to confidential drug trial results before they are released. And a person could make a lot of money trading on that kind of information.

JUAN GONZÁLEZ: Well, one of the fascinating things about your book, aside from the fact it’s great storytelling, is the way you describe the evolution of the hedge fund world from basically a strategy of investment to, in essence, totally unregulated gambling, sort of like a dark world of Wall Street, in general, where anything goes and where illegal insider information became such a valuable commodity in that world.

SHEELAH KOLHATKAR: Well, so, there are thousands of hedge funds now, and, of course, they all do different things. And some of them are fine, and some of them are not so fine. But, really, the whole idea of a hedge fund began decades ago. The idea was that you could create an investment fund where you could hedge your investments. So, if you went long certain stocks, you could also short other stocks, which means you were betting that the price would go down, and that would kind of offset your losses if the market went down. You know, so you were kind of hedging your bets. And this was attractive to wealthy investors. And the regulators decided that if only wealthy investors were using these funds, they would give them more latitude to take risk in the market. So they could borrow more money. They could do this shorting. And it started off as this little niche thing. But it was so successful, and many of the people running these funds became so wealthy—I mean, billions of dollars at early ages.

JUAN GONZÁLEZ: Well, as you say, Steven Cohen was reporting 30 percent returns every year, wasn’t he?

SHEELAH KOLHATKAR: Yeah, he was, year after year. His hedge fund, SAC Capital, posted 30, 50, 70 percent in its early days, 100 percent. And investors were fighting to get in. And by the time the events that I write about in this book really come to a head, you know, he had only had one down year, which was 2008, financial crisis year.

AMY GOODMAN: So, we don’t have much time, and you spent hundreds of pages, that were hard not to read, to say the least, telling us the story of SAC Capital and Steven Cohen. Tell us what happened.

SHEELAH KOLHATKAR: Well, ultimately, the FBI decided they were going to try and crack down on the hedge fund industry, and they kept hearing the name SAC all over the place, from different informants, on wiretaps, so they started to look into it. And over a period of several years, they used the same techniques they had used to investigate the Mob. They ended up charging a handful of people who worked at SAC. And there was a lot of—

SHEELAH KOLHATKAR: Well, it stands for Steven A. Cohen. Those are his initials, so Steven A. Cohen’s hedge fund, SAC Capital. It was a $15 billion fund at its peak, very powerful force on the market. And ultimately, the government had to make a decision about whether they were going to charge Cohen himself. And this is where he becomes, I think, sort of the man of our time, because there was this huge debate, the press was watching, a lot of anticipation: Is this huge Wall Street titan going to possibly face jail time?

AMY GOODMAN: Like the guy on the corner who steals $10.

SHEELAH KOLHATKAR: Exactly, unlike the—unlike the low-level drug dealer who’s definitely going to jail. I mean, there was a huge debate about this. Everybody was waiting to see. And the government ultimately decided they did not have the evidence they needed to definitively prove that Steve Cohen knew this illegal activity was taking place. And that is true. They did not have a witness. They did not have a wiretap. They did not have anything that definitively showed that Steve Cohen knew this was going on, even though the circumstantial evidence looked quite bad. So they ended up charging the company instead, SAC Capital, and Mr. Cohen ended up paying almost $2 billion in fines, and the hedge fund was shut down. But he can return to the industry in 2018. And I would argue that this story is important for everyone, because we all have money in the stock market now. I mean, Americans have largely been pushed to put their retirement savings in the stock market. And what you see, through this story, is that there are two markets. There’s one—

JUAN GONZÁLEZ: So, is the moral of the story, then, that unlike a previous era, when Milken and others were convicted, that the biggest of these Wall Street giants now have figured out a way to be able to get around the law?

SHEELAH KOLHATKAR: Well, after the financial crisis, the same thing happened. We did not see any senior-level bankers even facing the possibility of going to jail. And they largely resolved the criminal activity from that scandal through fines. So, I think this has caused a lot of frustration for the American public, who—

AMY GOODMAN: Kevin O’Connor, it was reported by Bloomberg in November, the general counsel for Steven Cohen’s investment firm, oversaw the staff picks for the Justice Department as a member of President Donald Trump’s transition team, according to a chart [obtained] by Bloomberg.

SHEELAH KOLHATKAR: I thought that was just about the perfect ending to the story, based on the way things are going. But I believe—I mean, that was reported, and it seemed to be only for a brief time. But yes, it does appear that people from Cohen’s world and his industry have now moved into Washington, and they are directing economic policy and regulatory policy. And this is something we all need to be concerned about. And I don’t think it’s going to resolve the frustrations of the voters who put Trump in that position.

AMY GOODMAN: Do you think Donald Trump will ever release his tax returns?

SHEELAH KOLHATKAR: It doesn’t look like it. But, I mean, I think it’s a scandal. I can’t believe he hasn’t had to do it. But look where he’s gotten without releasing them. So, I don’t see any incentive for him to do so now, frankly.

JUAN GONZÁLEZ: And his claim that the American people don’t care about this?

SHEELAH KOLHATKAR: Well, obviously, it depends on who you ask. A lot of people do care. And that kind of transparency is really important. I mean, it’s a problem when we do not know, as a people, who our president is financially beholden to. And ultimately, most stories, I think, in Washington come down to money. So, we do not know where the money trail goes, and we should have that information. And it’s very upsetting that we don’t.

AMY GOODMAN: Well, I hear there are plans for an April 15th Trump Taxes March on Washington, so we’ll see what happens. Sheelah Kolhatkar, I want to thank you for being with us.

AMY GOODMAN: Staff writer at The New Yorker, author of the new book Black Edge: Inside Information, Dirty Money, and the Quest to Bring Down the Most Wanted Man on Wall Street. This is Democracy Now!, democracynow.org, The War and Peace Report. I’m Amy Goodman, with Juan González.

A Message to Trump from a Swede: My Real Concern is Rise of Militant Anti-Muslim Neo-Nazis, Fascists

NEXTA Message to Trump from a Swede: My Real Concern is Rise of Militant Anti-Muslim Neo-Nazis, Fascists 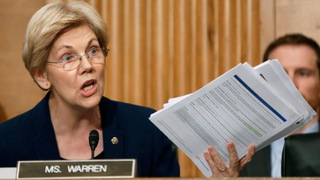