Actor Cynthia Nixon at LGBT Rally Outside Stonewall Inn: Trump’s “Fear and Anger Are Consuming Him”

Among the thousands of anti-Trump demonstrators who gathered outside the Stonewall Inn in New York City’s West Village was actress Cynthia Nixon, best known for her role as Miranda in “Sex and the City.”

StorySep 23, 2020Who Is Amy Barrett? Front-Runner to Replace RBG Is Anti-Abortion Member of Patriarchal Catholic Group

AMY GOODMAN: There were so many who addressed the crowd for hours on Saturday, among them Cynthia Nixon, the actress best known for her portrayal of Miranda Hobbes in Sex and the City.

CYNTHIA NIXON: Hello, brothers. Hello, sisters. Hello, siblings who reject the gender binary. Welcome and thank you for being here.

As LGBT people, we know how important coming out is. But I would argue that our coming out has never been more important than it is right now. We need to come out not just as queer, but as people who know all too well what it feels like to be put in a box that says “other,” “less than,” “easy target if you’re looking for someone to bully, harass, discriminate against, demonize, beat up, even kill.”

We don’t know yet what Donald Trump has in store for us, and chances are he doesn’t either. As far as LGBT people are concerned, he seems to hold many different positions at once, or, as Gertrude Stein once said, “There’s no there there.” He poses as our ally. He reassures us he would never let his administration roll back our hard-won rights. But he chooses Mike Pence—

CYNTHIA NIXON: —the poster boy for anti-LGBT rhetoric, legislation and conversion therapy, as his vice president.

CYNTHIA NIXON: —are supposed to reassure us that those closest to him are gay-positive cosmopolites. But Kushners couldn’t even get the president to mention Jews on Holocaust Remembrance Day. So, not sure how much influence they really have when weighed against his desire to placate his base.

We must fight hard and yell loud for ourselves. We have come too far to be turned back now. But we must fight just as hard and yell just as loud for Muslims, both those here and those trying to get here. We know now that their struggle is our struggle, because their enemies are our enemies. Whether we are lesbian or gay or transgender or Muslim or Mexican or any one of a number of other categories I could name, we are allies united by our otherness. And if we didn’t know it before, thanks to Donald Trump, we know it now. And, yes, yes, we are stronger together.

Seattle Federal Judge James Robart’s ruling yesterday has, for now, shut down Trump’s Muslim ban, at least temporarily. It is a major legal decision in the right direction. For it, we certainly have Judge Robart to thank, but also the thousands and thousands of people who have come out and protested the ban and kept the issue front and center for the last week—in other words, us!

I was at a number of those protests, and I’m sure a lot of people here today were, too. And the thing that has struck me at all of the protests I’ve been to is not the anger, which has been abundant, not the turnout, which has been, if you’ll pardon the expression, “yuuge,” but the diversity of the crowd and the good humor we have managed to maintain in the face of such hateful Trumpian bleakness, and the wit and creativity of the messages we are expressing on our signs and on our bodies.

While our anger is high and highly justified, it is important that it’s entwined with those other strands that sustain us. We cannot burn with anger 24/7, or we will flame out. Our rage will consume us. And, people, we are in this for the long haul, because this is just the beginning. And if we listen to the anarchists and go violent, I believe we’ll make things even worse than they are already. We will give our law-and-order president just the opening he’s looking for.

So my message today is take care of yourselves, because you are our most valuable resource right now. We needed you here today, and I thank you for coming, but it’s not over. We need you hear tomorrow, too, and next week and next month and next year. We have to keep coming out. And to do that, we have to find a place inside each of us and between all of us of joy and humor and solidarity and hope. And then we can win. I promise. Look at Donald Trump. His fear and anger are consuming him. Be different. Be other. Be you. We need you!

AMY GOODMAN: That was Cynthia Nixon, known for her portrayal of Miranda Hobbes in Sex and the City and many other productions, speaking Saturday at the massive rally outside the Stonewall Inn in New York City. This is Democracy Now!, democracynow.org, The War and Peace Report. I’m Amy Goodman, with Juan González. 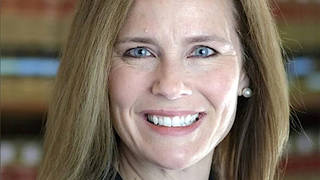 Who Is Amy Barrett? Front-Runner to Replace RBG Is Anti-Abortion Member of Patriarchal Catholic Group