President Trump is facing yet another major scandal. The New York Times is reporting Trump personally asked FBI Director James Comey to end the agency’s investigation into Trump’s former national security adviser, Michael Flynn. The New York Times reports President Trump made the extraordinary request to James Comey during an Oval Office meeting on February 14—one day after Trump fired Flynn for lying both publicly and privately about his contacts with Russian officials. Trump reportedly asked Vice President Mike Pence and Attorney General Jeff Sessions to leave the room before making the request to Comey. After the meeting, Comey wrote a memo quoting the president saying, “I hope you can see your way clear to letting this go, to letting Flynn go. He is a good guy. I hope you can let this go.” We speak to John Kiriakou, who spent 14 years at the CIA as an analyst and case officer. He was jailed for 23 months after he became the first CIA official to confirm publicly the Bush administration’s use of waterboarding.

AMY GOODMAN: We’re on the road in San Diego, California.

SEN. JOHN McCAIN: I think we’ve seen this movie before. I think it’s reaching the point where it’s of Watergate size and scale and a couple of other scandals that you and I have seen. It’s the centipede that the shoe continues to drop. And every couple of days, there’s a new aspect of this really unhappy situation.

SEN. CHUCK SCHUMER: In a week full of revelation after revelation, on a day when we thought things couldn’t get any worse, they have. I was shaken by the report in The New York Times that alleged that the president tried to shut down an active FBI investigation into a close political associate. And we are only one day removed from stunning allegations that the president may have divulged classified information to a known adversary. Concerns about our national security, the rule of law, the independence of our nation’s highest law enforcement agencies are mounting. The country is being tested in unprecedented ways. I say to all of my colleagues in the Senate: History is watching.

After the meeting, Comey wrote a memo quoting the president saying, “I hope you can see your way clear to letting this go, to letting Flynn go. He is a good guy. I hope you can let this go.” In addition, President Trump reportedly urged Comey to consider jailing reporters for publishing classified information. Trump fired Comey last week, days after he requested more resources for the FBI’s probe into Russian meddling in the 2016 election. On Tuesday night, Republican Congressman Jason Chaffetz, chair of the House Oversight Committee, called on the FBI turn over all “memoranda, notes, summaries, and recordings” of discussions between Trump and Comey.

We’re joined now by John Kiriakou, who spent 14 years at the CIA as an analyst and case officer. In 2007, he became the first CIA official to publicly confirm the Bush administration’s use of waterboarding. In January 2013, Kiriakou was sentenced to two-and-a-half years in prison after pleading guilty to confirming the identity of a covert officer to a reporter, who actually did not publish it. Kiriakou’s memoir, which has just been published, is titled Doing Time Like a Spy: How the CIA Taught Me to Survive and Thrive in Prison.

JOHN KIRIAKOU: Thank you so much.

AMY GOODMAN: Thanks so much for joining us. Can you respond to this latest scandal at the White House?

JOHN KIRIAKOU: I’m very, very, even gravely, concerned about the path that this scandal seems to be taking. It’s more like an onion than it is one single scandal. Every time we peel one layer off the onion, there’s another scandal underneath it. And now we have members of Congress talking about impeachment. I think impeachment, frankly, is something that is a real possibility, something we ought to be discussing. I think that it’s—it’s pretty clear that the president has committed obstruction of justice. And let’s face it. Director Comey is a player in Washington. He’s been around the block. Do we really think that he released the most explosive memo he has, knowing that he wrote memos every time he spoke with President Trump? My guess is, there’s a lot more explosive information out there waiting to be released.

AMY GOODMAN: Well, can you talk about exactly the significance of what Comey’s memo reveals that Trump asked him to do on February 14th in a meeting where, according to The New York Times, he told Jeff Sessions and, I think it was, the vice president to step out of the room and then asked Comey to drop the investigation into his, well, fired national security adviser, Mike Flynn? He had fired him the day before.

JOHN KIRIAKOU: That he asked the vice president to leave the room, to me, is damning information. That tells me that the president knew exactly what he was doing, that he knew that he was going to have to say something that was inappropriate and perhaps illegal, and he likely wanted no other witnesses. That way, whatever Director Comey eventually came out to say, the president could say he’s a liar. Well, I think he overplayed his hand. He intimated last week that there were tapes of that conversation. I think that the Congress should act immediately to subpoena those tapes, if they exist. My guess is they’re going to confirm Director Comey’s version of that conversation.

AMY GOODMAN: And, of course, now Congress is calling on Comey to testify, which apparently he is willing to do. The significance of what this fired FBI director could say in one of these hearings?

JOHN KIRIAKOU: Well, it was fascinating to me, Amy, that Director Comey declined to testify in a closed session of the Senate Intelligence Committee but said that he was willing to testify in an open session. That’s potentially explosive. I think what many congressmen and senators on Capitol Hill expect is that Director Comey is going to reveal the possibility that other crimes were committed, either by the president or by those around him.

AMY GOODMAN: And also, the significance of the allegation that President Trump revealed highly classified information to the Russian officials—the foreign minister, Lavrov, and the Russian ambassador, Kislyak? I mean, this is not illegal. The president—

AMY GOODMAN: —can do what he wants to in this regard. Is that right?

JOHN KIRIAKOU: That’s right. The president has final declassification authority over all information controlled by the federal government. So, if he leaks classified information—and apparently he did—it’s not—it’s technically not a crime. It was certainly inappropriate. And if you’re going to leak classified information, my god, the last country you want to leak it to is the Russians. But this goes a little bit deeper. I think this just shows how impetuous this president is and how he frequently acts from his gut. He flies off the handle. He does things without thinking them through. And to me, it just sort of makes it difficult to figure out how he can get through a 4-year term going down this path. This is—this is one problem, one scandal after the other, and it’s cumulative. It takes a toll. 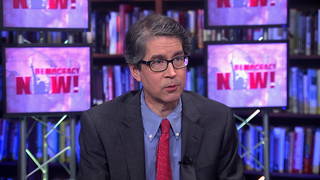