In March, state Republican lawmakers in North Carolina struck a deal to overturn a law denying transgender people the use of the bathroom, changing room or locker room that matches their gender identity. But LGBTQ groups say the so-called repeal of HB 2, the “bathroom bill,” hasn’t ended the discrimination. The deal allows the state to continue regulating bathrooms while barring local governments from enacting their own anti-discrimination laws until late 2020. We speak to Sarah Gillooly about the ACLU’s ongoing fight.

AMY GOODMAN: Well, I wanted to end by turning to another issue, the issue of the ACLU’s plans to fight the North Carolina bill that replaced the anti-trans bill known as HB 2. Sarah Gillooly, for people who don’t live in North Carolina, maybe even some who do, can you give us an update on what’s happened? I mean, now, the Republican governor, McCrory, has been placed—replaced by a Democratic governor, Cooper. What happened with HB 2? And what’s happened with its replacement?

AMY GOODMAN: Explain what you mean by “basketball has returned.”

SARAH GILLOOLY: Yeah, the NCAA had been boycotting North Carolina as a result of HB 2 and the blatant sort of violations and discrimination of the law. Basketball has returned. But let me be clear: HB 2 has not been repealed, and the harm of HB 2 to transgender North Carolinians has not been undone.

So, HB 2 did three things. It said that trans people could only use the bathroom of their biological sex in accordance with their birth certificate. It said that no city could pass a nondiscrimination ordinance to protect transgender North Carolinians. And the third thing it said was, only the General Assembly could regulate access to bathrooms and locker rooms.

AMY GOODMAN: And the fact that the governor, though he says he doesn’t love the new bill, calls it a compromise?

AMY GOODMAN: Well, we’ll continue to follow this. I want to thank you both for being with us. Sarah Gillooly is with the ACLU of North Carolina. And Raul Jimenez is with the Triangle People’s Assembly.

Yes, we’re broadcasting from Raleigh, North Carolina, as we continue our journey through the United States. We’ll be tonight in Miami, and then tomorrow we’re moving on to Tampa, Florida. We’re on then to Atlanta. And we’ll be going to Madison, Wisconsin, Chicago, and we’ll be in—and we’ll be in Michigan, as well. This is Democracy Now! When we come back, we’re going to look at the politics of North Carolina, in the broadest sense. Stay with us. 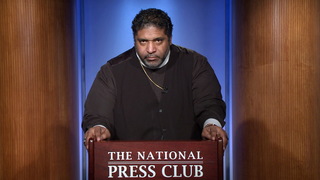