U.N. investigators say U.S.-led bombing has killed 300 Syrian civilians over the last three months in the city of Raqqa. A U.S.-led bombing campaign in Mosul has also reportedly killed dozens of Iraqi civilians over the last week alone. For more, we speak with Democratic Congresswoman Barbara Lee of California. In 2001, she was the lone vote against the Authorization for Use of Military Force after the September 11 attacks.

NERMEEN SHAIKH: Well, Congresswoman Barbara Lee, I also wanted to ask you about U.S. military action in Iraq, Syria and Afghanistan. U.N. investigators say U.S.-led bombing has killed 300 Syrian civilians over the last three months in the city of Raqqa. A U.S.-led bombing campaign in Mosul has also reportedly killed dozens of Iraqi civilians over the last week alone. There is also the recent news that President Trump has given the Pentagon the power to set troop levels in Afghanistan, which means the U.S. may deploy thousands more troops there. Congresswoman Lee, back in 2001, you were the lone vote against the Authorization for Use of Military Force after the September 11th attacks. Now, how do you see these wars being waged under President Trump?

REP. BARBARA LEE: It’s a continuation of the authorization that, unfortunately, was a blank check, that I voted against in 2001. This president needs to come to Congress. We need a debate. We need to vote up or down on a new strategy. We don’t know what this new strategy is. We don’t know what is taking place. Congress has the responsibility to authorize the use of force. This president has not come for that, and yet he continues to expand these wars. The war in Afghanistan is the longest war in American history, 16 years. And so, at what point will the country say enough is enough, and insist the president come back to Congress for authorization?

I have a bill to repeal the 2001 authorization. We should vote that up. We should vote it out, actually. You know, I have Republican support for that bill. We have legislation to stop the funding for these wars that are unauthorized. And so, Congress is missing in action. What they are doing at this point is hard to determine. It seems like he’s outsourced this to the secretary of defense. And the president continues to—on this footing that creates more havoc and chaos and that has no strategy. And so more civilians are being killed, and we need to really understand what the costs and consequences of these wars, and minimally require a debate and a vote, so that we can have—so the American people, at least, can know what the strategy is and what it’s going to cost.

AMY GOODMAN: Congressmember Lee, before we go, one of the top news stories today: President Trump now under investigation for possible obstruction of justice, The New York Times also reporting special counsel Robert Mueller’s investigation is looking into whether Trump’s associates, including his son-in-law and senior adviser Jared Kushner, have committed any financial crimes, including money laundering aimed at hiding possible financial payoffs that might have been part of a cooperation between Trump associates and Russian officials. And you’re part of the lawsuit, along with Congressmember Conyers, around emoluments and suing the president of the United States. Can you respond to all of this?

REP. BARBARA LEE: Well, it’s important that these investigations continue. Robert Mueller—and we wanted a special prosecutor, but we also want an independent commission. And, yes, I’m a plaintiff in the emoluments lawsuit. It’s very important that we know if, in fact, this president has benefited monetarily or otherwise from foreign governments. That’s clearly against the Constitution. And so we have—I believe it’s 200 plaintiffs in this lawsuit. But these investigations are extremely important, because we need—the American people, first of all, need to know the facts, and we need to see be president’s tax returns. Why in the world is he not allowing the public to review and look at his tax returns? Something’s going on that is very serious, and these investigations are moving forward, but we also need an independent commission to conduct an independent, bipartisan investigation. 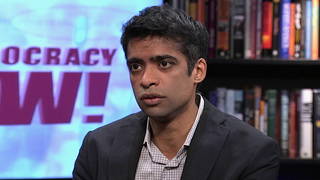