Next week, India’s Prime Minister Narendra Modi will travel to the United States and meet with President Trump. Modi was once banned from the United States on charges he did not intervene in a massacre against Muslims in 2002 in the Indian state of Gujarat. Trump has praised Prime Minister Modi, while Hindu nationalists have been big supporters of Trump, even throwing him a birthday party celebration earlier this month. For more on Modi’s visit to Washington, D.C., we speak with award-winning Indian novelist, journalist and writer Arundhati Roy, whose new novel, “The Ministry of Utmost Happiness,” has just been published. While critics often compare Modi to Trump, Roy says there are important distinctions between the two, referring to Modi as the “opposite of an outlier.”

ARUNDHATI ROY: Wow! What a jump! From Tilo to Modi.

NERMEEN SHAIKH: Yeah, his trip to the United States, coming to D.C. next week to meet Donald Trump, President Trump, for the first time. Let’s go to comments that Trump made last year to the Republican Hindu Coalition.

DONALD TRUMP: I’m a big fan of Hindu, and I am a big fan of India! Big, big fan. Big, big fan. … Prime Minister Modi, who has been very energetic in reforming India’s bureaucracy, great man! I applaud him for doing so. And I look forward to doing some serious bureaucratic trimming right here in the United States. Believe me, we need it also.

NERMEEN SHAIKH: So that’s Trump speaking on the campaign trail to the Republican Hindu Coalition. And now, just recently, on the occasion of Trump’s birthday, a right-wing group in India called the Hindu Sena celebrated Trump’s birthday. So could you talk about that, first of all? And also, you know, a lot of people have been saying that Trump and Modi are very similar. But you think—you said that there are very important distinctions between them, so if you could talk about that?

NERMEEN SHAIKH: It was just now, earlier this month, on the 14th.

ARUNDHATI ROY: No, so I’m talking about an earlier occasion.

ARUNDHATI ROY: And then they—the TV crew asked them what was happening. And they said, “Oh, we are celebrating the birthday of Donald Duck.” But so it was very funny.

But anyway, yes, there are, to my mind, very serious distinctions between the phenomenon of Trump and Modi. Look, I’m not, you know, like a real close commentator on American politics, so I might be wrong about what I’m saying, but from what I see, Trump somehow has sprung up from the sort of effluent of a process where the Democrats, who claim to be the representatives of workers, of unions, of the people, has betrayed—has betrayed them, has left a group of people disenchanted, furious, and even more furious when Bernie Sanders was, you know, not the candidate, and it was Hillary Clinton. So, Trump comes in as a kind of outsider, suspected and mocked, perhaps rightly so, by the media, by American institutions. There’s an inquiry against him. You know, you see the big wheels, or what I call the deep state, also a little bit worried about him, whereas this is not the case with Modi.

Modi, as I said, is a product of the RSS, that from 1925 has been working towards this moment. The RSS has hundreds of thousands of workers. It has its own slum wing, its own women’s wing, its own publishing wing, its own schools, its own books, its own history. Its people are everywhere. The movement is from the ground. You have to give them that. They have worked endlessly. So he’s—Modi is the opposite of an outlier. He is—he is someone who—right now, the RSS is in control. The only thing is that the RSS is a little bit—I mean, I think, a little bit worried about this single man who’s taking all the attention, and maybe they are preparing an heir to Modi, because he has destroyed government. It’s just between him and what’s on the street, you know? So, much of what government policy is, is being executed by vigilante mobs, and the bureaucracy—the party itself is being put into a corner, and it’s just Modi and his lieutenant, Amit Shah, and everyone else is humiliated. And then there is this whole—you know, the great strongman and temples being built to him and so on.

AMY GOODMAN: If you could create the meeting that will happen between Modi and Trump, as you’ve created the communities in this book, what would you make happen? What would help India, the India you want to see, Arundhati?

ARUNDHATI ROY: It would help if both of them are both sent to the Frying Pan Park in Virginia with all the turkeys that are forgiven on Thanksgiving. I think, you know—I mean, the meeting isn’t going to help us, because that’s not the issue, right? The issue is that—what do they represent, and why—I mean, to me, I don’t—it’s not important to me to mock Trump or to say things about Modi, because the real question is, why are they—you cannot dismiss the fact that they are people who have been elected democratically. So there’s fire in the ducts. And that is the problem, you know, not—it’s just—you know, they are both easy meat. You know, they are both easy to laugh at, but I don’t think it’s a laughing matter, you know?

And the point is that someone like myself, you know, I am in a position where one is—one is in a minority of voices right now. And even though I’m a writer and I don’t necessarily believe ever that the majority is always right, so there’s something very wrong going on. And that wrong has been created by the people who are criticizing Trump now, you know? So we do need to think about that seriously. You know that. I mean, you’ve been following it, and you know that better than I, you know. And the same in India. You know, the Congress Party has opened every door, lit every fire. Now that it’s burning, we can’t look at them as an alternative. They have been involved with massacres themselves. They have created vigilante groups themselves. They have created communal conflagration themselves. They’re just the B team. So…

AMY GOODMAN: You visited Edward Snowden in Russia with the actor John Cusack and with Pentagon Papers whistleblower Dan Ellsberg, who was just in our headlines today. What was that like? We have less than a minute to go.

ARUNDHATI ROY: Oh, it was wonderful, phenomenal. I mean, most phenomenal to see Dan and Ed talking to each other about what it meant to be a whistleblower in the '70s and then now, you know? And to me, from the outside, I did wonder, you know, like how long is it going to be. You know, that was Vietnam. There's Korea. There’s Iran. I mean, history just keeps reinventing itself. And again, today, you hear them say, “Oh, it’s going to be a long war.” So, you know, one enemy of America turns into another, turns into another, turns into another. But the big wheels keep on turning. And we don’t have enough Snowdens and Ellsbergs around.

AMY GOODMAN: Well, Arundhati Roy, it has been a pleasure spending this hour with you. Of course, it wasn’t enough, so we’re going to do a short post-show after, and we’ll post it online at democracynow.org. Arundhati Roy is the author of the new novel, The Ministry of Utmost Happiness. She won the Booker Prize in 1997 for her firs novel, The God of Small Things. 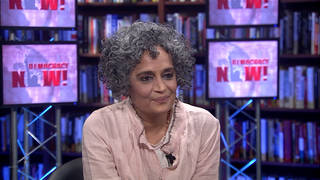