Can Brooklyn’s Little Pakistan Survive Trump? Inside One Family’s Fight to Stop Their Deportation

A new piece in The New Yorker titled “Fighting for the Immigrants of Little Pakistan” looks at how a predominantly Muslim neighborhood in Brooklyn is coping with the presidency of Donald Trump, who, just seven days after taking office, issued a controversial travel ban targeting predominantly Muslim countries. Trump’s presidency also ushered in a rise in immigrant deportations and arrests. We speak with the author of the piece, Jennifer Gonnerman, who looks in part at the story of Shahid Ali Khan and his family, who are facing possible deportation. We also speak with Mohammad Razvi, founding executive director of Council of Peoples Organization (COPO), a community group serving Muslims, Arabs and South Asians.

AMY GOODMAN: This is Democracy Now!, democracynow.org, The War and Peace Report. I’m Amy Goodman. Can the Brooklyn neighborhood of Little Pakistan survive the presidency of Donald Trump? That’s the question posed by a new piece in The New Yorker magazine. Writer Jennifer Gonnerman looks, in part, at the story of Shahid Ali Khan and his family, who are facing possible deportation. For years, they successfully received stays of removal, but this year appears to be different. On July 6, they have a meeting scheduled at the ICE enforcement and removal field office. That meeting could determine if the family can stay in the United States.

Jennifer, talk about this extremely poignant story of this family, who came to this country to save the life of their baby boy.

JENNIFER GONNERMAN: Right, they’re an—it’s an extraordinary story. The Khans came in 1997, two parents and a baby, who was not yet two. The father was a bank manager in Pakistan. He gave up everything, because his son was born with a heart defect and needed surgery that couldn’t be gotten in Pakistan. He looked into various countries to come to, ultimately got a visa to come to the United States, came to Brooklyn, went from one hospital to another, ultimately ends up at Mount Sinai. And when his son is 2 years old, he gets open heart surgery there.

JENNIFER GONNERMAN: Exactly, exactly. And then, as a consequence of that surgery, the son ends up suffering a very rare movement disorder, which he is unable to control his limbs, can’t eat, can’t feed himself, can’t walk, needs a feeding tube, wheelchair. And the family has no choice but to stay. So even after their visa runs out, they try to get, you know, an extension, and they stay here and continue to get medical treatment for their son. And over the next years, the son makes terrific progress. He’s now walking, though not too steadily. He talks a little bit, not too easy to understand. But his progress has been tremendous. And the family continues to get treated at Mount Sinai and elsewhere.

AMY GOODMAN: And they say he will not be able to proceed like this or progress, if he is forced out.

JENNIFER GONNERMAN: His doctors say that the treatment he needs—he’s got a number of very complicated and unusual medical conditions, and the support system that he has here, he will not have if he’s sent back to Pakistan. I had heard about the family because it’s somebody that Mr. Razvi had helped in the past, post-9/11, and somebody he was very proud of helping and being able to stop their deportation many years into the past. And then I happened to be in his office—it was about a week or two ago—finishing up this story for The New Yorker, and suddenly here comes Mr. Khan, completely despondent, straight from the ICE office and coming to Mr. Razvi’s office for help, and told us that he was at risk of deportation.

AMY GOODMAN: So this is a story, Mohammad Razvi, you’ve been dealing with for many years. In fact, you have the picture of the little boy when he was very young thanking you for stopping his dad’s deportation years ago.

MOHAMMAD RAZVI: Yeah, absolutely. I mean, I still remember that day. You know, his son and he came in, and he said, “You know, Mohammad, this is what my son made for you.” And he brings in his—this card, and it says, “Thank you. Thank you for bringing my dad back.” And, you know, at that time, he graduated from elementary school, and, you know, he really wasn’t able to speak as much, as Jennifer was saying, but it was just, you know, heart-filling that we were able to save this person.

AMY GOODMAN: So what are the chances now? You represent so many in the Pakistani community who come to you for help. July 6 is the day they have to go into the ICE office. Is it the whole family or just Shahid Ali Khan, the father?

AMY GOODMAN: Could be deported.

MOHAMMAD RAZVI: Could be deported.

MOHAMMAD RAZVI: After decades of being here. And it is very fearful. We are very concerned. We are working with the attorney. And we’re also going to be reaching out to Senator Schumer’s office and also Congresswoman Yvette Clarke’s office to have their assistance, as well. That’s what we did in the past, to get the elected officials to also weigh in for this family.

AMY GOODMAN: Is the Pakistani community particularly afraid now? I mean, is this as bad as the period after 9/11?

AMY GOODMAN: We’re going to continue this discussion, post it online at democracynow.org. Mohammad Razvi, founding executive director of Council of Peoples Organization, a community group serving Muslims, Arabs and South Asians, as well as Jen Gonnerman. We’ll link to your piece in The New Yorker magazine, “Fighting for the Immigrants of Little Pakistan.” 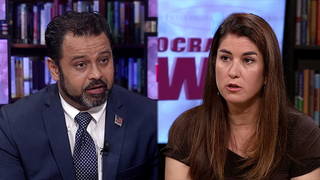