Brazilian President Michel Temer Charged with Corruption, a Year After He Backed Ouster of Rousseff

In Brazil, President Michel Temer has been formally charged with corruption, a year after he backed the ouster of President Dilma Rousseff from office. Federal prosecutors accuse Temer of taking millions of dollars in bribes. Prosecutor Rodrigo Janot said Temer has “fooled Brazilian citizens.” Temer, who rejected the allegations, is the country’s first sitting head of state to be formally charged with a crime. We speak with David Miranda, a journalist and the first LGBTQ member of the Rio City Council.

PRESIDENT MICHEL TEMER: [translated] They want to stop the country, stop the Congress, in a political act with fragile and precarious accusations hitting at the presidency of the republic.

AMY GOODMAN: The charges against the current president, Temer, come less than a year after Brazilian President Dilma Rousseff was impeached in what many described as a legislative coup. Her impeachment came as Brazil was engulfed in a major corruption scandal, but Rousseff herself was never accused of any financial impropriety. Since President Rousseff’s ouster last year, Brazil’s corruption scandal has only widened. At the center of the scandal are many of the right-wing politicians who orchestrated her ouster.

Well, to talk more about the situation, we’re going to Rio de Janeiro to speak with David Miranda, a journalist and the first LGBTQ member of the Rio City Council.

David, welcome to Democracy Now! Talk about the significance of the indictment of the sitting president of Brazil.

DAVID MIRANDA: Hi, Amy. Thanks for having me.

We have a—facing a major crisis in Brazil right now. And with these denouncements coming from the attorney, prosecutor, it shows like how Brazil is so corrupt. The lower house is going to be having to vote for Temer to go out. Two-thirds of that has to vote against him. And as we know, many of them are corrupt, as well. So we are facing a very struggle in Brazil, if they are going to be on his side or the side of the population. They are going to be going to the streets on the 30th now to do a major strike, and it can last 48 hours. So we’re hoping that public opinion will change the mind of those corrupt politicians, so he can vote that Temer has to go out now.

AMY GOODMAN: Can you talk about what Temer is charged with, this accusation of taking millions of dollars in bribes?

DAVID MIRANDA: Yeah. He’s accused by bribery and obstruction of justice, because, three months ago, he was caught on a tape, 11:00 at night, on the palace where he lives, in Brasília, with one of the biggest businessmen from JBS. He was talking to this guy, and he was asking for money and also to obstruct justice by the former lower house, Eduardo Cunha. So he wants to send money to him so keep him quiet. So, that’s what is the accusation. And it took three months for the attorney general take a look on the evidence, and he find out the reply saying that he’s actually being charged for this because the tapes are real, and there’s evidence for that. And now he just have to send that to the STF. Then it’s going to the lower house.

AMY GOODMAN: I want to go to Michel Temer speaking in 2016, following the ouster of President Dilma Rousseff.

PRESIDENT MICHEL TEMER: [translated] My first word to the Brazilian people is the word “trust”—trust in the values that form the character of our people, the vitality of our democracy; trust in the recuperation of our country’s economy, our country’s potential and its social and political institutions.

AMY GOODMAN: So, that was Temer last year, right after he was involved with the ouster of Dilma Rousseff. What happens now, David?

DAVID MIRANDA: Well, it’s funny, because we took her presidency. Her party is very corrupt. She was charged for one like fiscalization she changed, a move economically. But she was not charged with corruption. And now we have the first president in history that is charged actually with criminal and for obstructing justice.

And we’re facing like a decision, because Temer was the choice of the elites of Brazil for changing and pass the laws that [subjugated] the labor in Brazil. So he was doing the work, the dirty work, here in Brazil. But right now, they’re facing like—he’s not going to be able, because the public opinion is changing towards him. So, the old parties are getting together now in Brazil, like PT, the Workers’ Party, from Dilma, the SDP, the former president, Fernando Henrique Cardoso, and they don’t want Temer to go out now. They wanted Temer to stay into the next year for the election. So they probably will wrap it up, everything they can, to keep Temer in there. So we are facing like—the public wants Temer out, but the old parties doesn’t want him out.

AMY GOODMAN: I want to ask you, David, about what happened earlier this year during a protest in Rio de Janeiro, where you are now, when you were hit by a car yourself after setting up traffic cones to block vehicles. Can you tell us what happened?

DAVID MIRANDA: Yeah, I was—I got up 2:00 in the morning to do a strike with everybody else in the city, with the youth. So, we are blocking the streets so people don’t get into their work and downtown. So, I was blocking the street with cones, and this car came, and he didn’t stop. He just ran over me. And I just pushed my arms in the top of the car to push aside. And the funny thing is, like, we posted that video on Facebook, and there’s so many comments saying that he did the right thing. And this just show how like the internet and how people are just like moving towards politicians, because they are not believing politicians anymore, like exactly what happened in U.S. And it can happen now in Brazil, because like Trump is right over there, and now we have this like big fascist happening here, Bolsonaro, that is just like Trump. But at the same time, like right in U.S., you have Bernie Sanders, who just raised the socialism, a really good part of the left, as much, here in Brazil, the piece of the party that I’m part of it. So, as much that that day was like traumatic to me, I even saw the people’s face in there and the struggles they are fighting together, the young and the old people. And that was like an achievement for a life for me. In that moment, I knew that I was on the right side of this fight.

AMY GOODMAN: Finally, we have just 15 seconds. The strike is planned for Friday, for Friday this week?

DAVID MIRANDA: Yeah, this Friday, the 30 of June. We will be—for 48 hours, we are planning this strike with the youth, with the workers’ class, the syndicates. Everybody’s going to stop Brazil. And I don’t think Temer can resist to this. I think he will fall. But the only concern here is like Temer falling, Rodrigo Maia, the head of the law house, who replaced Eduardo Cunha, the gangster for 15 years, in prison now, also is charged on the Car Wash. He’s being charged by corruption, as well. So, Brazil faces a very crisis on this moment now, because the big part of the politicians here are very corrupt.

AMY GOODMAN: We have to leave it there, David Miranda, journalist and first LGBTQ member of the Rio City Council. 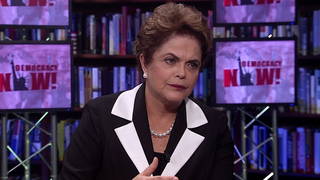