A revised Republican plan to repeal and replace the Affordable Care Act would gut Medicaid, give massive tax cuts to the wealthiest Americans and defund Planned Parenthood, making it harder for women to access breast cancer screenings and basic reproductive services. The revised bill is largely similar to the previous Senate bill, including plans to slash more than $700 billion from Medicaid by 2026. The Congressional Budget Office is expected to complete its assessment of this latest bill by early next week. Republican Senate leaders are pushing for a vote by the end of next week. We speak with Jessica Mason Pieklo, a legal analyst and vice president of law and the courts at Rewire.

MAJORITY LEADER MITCH McCONNELL: The draft we just discussed, like the one before it, addresses all of these objectives. It would again give Americans more tools for managing their own care, and, this time, go even further. It would again devote significant resources to the fight against the opioid crisis, and, this time, go even further. The revised draft improves on the previous version in a number of ways, all while retaining the fundamental goals of providing stability and improving affordability.

AMY GOODMAN: The revised bill is largely similar to the previous Senate bill, including the plans to cut more than $700 billion from Medicaid by 2026. The Congressional Budget Office says the previous bill would have caused 22 million Americans to lose their health insurance over the next 10 years. The CBO is expected to finish its assessment of this latest bill by early next week, and Republican Senate leaders are pushing for a vote by the end of next week.

Like the previous version, the new Senate Republican bill would defund Planned Parenthood for a year, making breast cancer screenings and basic reproductive services more difficult for women to secure.

To talk more about the new healthcare bill and the state of reproductive rights, we’re joined in Denver, Colorado, by Jessica Mason Pieklo. She’s a legal analyst and vice president of law and the courts at Rewire.

Jessica, welcome back to Democracy Now! Can you summarize this new bill? How new is it? How different is it from the previous bill, that didn’t even get voted on by Republicans because at least 10 of them disagreed with it? And then talk about how it specifically affects women.

JESSICA MASON PIEKLO: Sure. Well, it’s a disastrous revision that, frankly, does not change a whole lot. So, in terms of its specific impact on women, there’s a couple different provisions that we should talk about. As you mentioned in your introduction, the bill explicitly defunds Planned Parenthood for an entire year. The question of whether or not Republicans can actually do that, according to the Byrd Rule, which says that you can’t, in a budget, specifically target a particular organization for defunding like this, I think it is an open question, and I think that that specific provision is extremely problematic for Republicans.

But then, what’s really sneaky that they did, and in part this is thanks to the Cruz amendment, but in part it’s also written into the actual bill, is many of the objections that the town halls and that constituents early on raised to the original plan, such as ending coverage for folks who are over 26, ending protections for pre-existing conditions, the federal bill all purports to include those types of things, but then it also has a provision that allows states to explicitly exclude those things in insurance products sold within state boundaries. And so, what the Republicans have done is effectively gut all of the main protections of the Affordable Care Act and pass those down to the states, which really functions as a race to the bottom.

In particular, we see this with the Medicaid provisions, in the attacks on the Medicaid provisions. Republicans are effectively trying to phase out Medicaid altogether. And in this process, they’ve allotted caps on care. And this is a disaster, not just for women and children, but to remember that principal recipients of Medicaid are people with disabilities and the elderly. And so, what they’re really doing is kicking people off insurance immediately or creating lifetime caps for situations that are extremely expensive to treat. This is not just a massive redistribution of wealth up, but it is a return to the times when we institutionalized people, when we refused to give them care. Only, I would add, this time is worse, because more and more of those institutions are being run by religiously affiliated institutions that have found lots of ways to skirt civil rights protections and other regulations. And so this is really scary.

And in addition to defunding Planned Parenthood explicitly in the federal bill, they also, further in it, try to redefine what qualifies as a federally qualified healthcare clinic. And this is an express attack not just on Planned Parenthood, but on reproductive healthcare clinics in general. We’ve seen this at the state level, where, by redefining what qualifies as a clinic for either federal or state aid, conservative lawmakers are able to put Planned Parenthood and other organizations that provide comprehensive reproductive healthcare at the bottom of that list. So it’s effectively a defunding of those organizations without actually defunding them, in violation, or at least in alleged violation, of the Byrd Rule.

AMY GOODMAN: And if you can explain, Jessica Mason Pieklo—why defund Planned Parenthood for a year? What is the logic of the Republicans on this?

JESSICA MASON PIEKLO: I think, frankly, the logic of the Republicans is to keep their base all churned up for the midterms.

AMY GOODMAN: I’m just looking at a piece that recently came out in Huffington Post that said, “Republicans are trying to find a way to defund Planned Parenthood as part of an overall effort to limit abortion in America. But doing so [had] the opposite effect in Texas, according to a new study based on research from Texas A&M University,” that abortions among young people in Texas, where it’s much more difficult to find an open women’s health clinic that provides abortion, have actually gone up.

JESSICA MASON PIEKLO: Well, right. And it—I mean, it makes perfect sense, right? If you continue to curb access to comprehensive reproductive healthcare, as Texas has done, not just in curbing access to clinics, but in making it difficult to access contraception, and attacks across the board, then, obviously, people are going to have to carry pregnancies to term that they otherwise wouldn’t, including failed pregnancies. And so, defunding Planned Parenthood and attacking Title IX family resource—or family planning resources is absolutely a way to drive up the birth rate and, in particular, to force women and patients to carry pregnancies to term according to the state’s dictates, not their own.

AMY GOODMAN: Can you talk about contraception, what you just referred to, and how it will be affected by this plan, if it were to go forward?

JESSICA MASON PIEKLO: Well, the administration has been very clear that it plans on—that it plans on attacking contraception, and specifically the contraception benefit in the Affordable Care Act. And they’ve shown this a couple ways. First was through the Trump administration’s purported religious imposition order, which explicitly allowed the Department of Health and Human Services to start the rulemaking process of unwinding the birth control benefit. Republicans have a little bit of a problem here. The birth control benefit is a part of the Women’s Health Amendment, which is an actual component of the Affordable Care Act. So, unwinding the rule alone does not get rid of the—does not get rid of the birth control benefit.

But right now we have HHS working on an interim final rule. We don’t know what that looks like. It hasn’t been released yet. They’ve promised a release date by the end of the month. What we can anticipate in it is, at a minimum, an enormous religious, and probably immoral, carveout for folks who have objections to supplying nondiscriminatory insurance care. And that includes insurance coverage that has contraception at no additional cost or copay. And I say “nondiscriminatory” healthcare because reproductive healthcare, especially contraception, is preventative care, and, typically, preventative care is part and parcel of your basic package of health insurance. The way that cable basically packages some of its programs, health insurance companies do that, too.

Another part, though, of the new bill is, by allowing states to opt out of abortion coverage, opt out of contraception coverage, and even if Ted Cruz gets his way, sell plans in the marketplace that do not comply with even the new requirements, what we are going to see are cafeteria plans, where insurance providers say, “You must pick this and that and this other thing for coverage,” and they will be priced in a way that people won’t be able to afford, or they will just simply forgo some essential services, thinking that, “Well, if there’s an issue down the road, I guess I’ll deal with it then.” 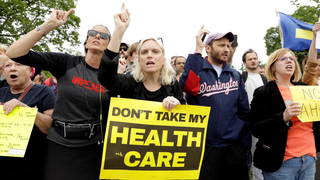