Newly declassified State Department documents show oil contracts played a key role in the U.S.-backed 1953 coup in Iran that led to the overthrow of the democratically elected Prime Minister Mohammad Mosaddegh. “What the documents show is actually the importance of oil in the coup,” says Professor Ervand Abrahamian. “The conventional wisdom is, oh, it was all the Cold War scare, communism. But here you see, actually, very occasionally, when Eisenhower intervenes in a discussion, it’s about question of oil contracts and so on and how nationalization would disrupt the whole international framework and would be a threat to U.S. interests, oil interests, elsewhere.”

StoryMar 12, 2018Overthrow: 100 Years of U.S. Meddling & Regime Change, from Iran to Nicaragua to Hawaii to Cuba

JUAN GONZÁLEZ: And, of course, oil has always been at the center of Western policy toward Iran. And you’ve written about some recently released documents that date back to the 1953 coup of the—

JUAN GONZÁLEZ: —organized by the CIA against the democratically elected leader of Iran.

JUAN GONZÁLEZ: Could you talk about that and also why it’s taken so long for these latest documents to be released?

ERVAND ABRAHAMIAN: Well, as you say, it’s so long ago. And actually, according to rules—there’s a 30-year rule, so documents that are—could be released are. It’s taken three decades of beyond that before the State Department released these. It’s like pulling teeth out of someone. And the reason, when you look at it, is that—well, there are two reasons. One is that what the documents show is actually the importance of oil in the coup. The conventional wisdom is, oh, it was all the Cold War scare, communism. But here you see, actually, very occasionally, when Eisenhower intervenes in a discussion, it’s about question of oil contracts and so on and how nationalization would disrupt the whole international framework and would be a threat to U.S. interests, oil interests, elsewhere.

But another, I think, reason they have been so reluctant to publish these documents is that it shows how involved the U.S. Embassy was, the ambassador, in internal Iranian affairs. It’s like looking at an imperial power in a semi-colonial situation. The ambassador acts basically like a viceroy, involved in many different internal policy. He often says, “Oh, of course, it’s not my business to be involved in internal policy,” but then he goes ahead and, in fact, does get involved.

And the astounding discovery, I was surprised, is how CIA was involved in the elections that were held in 1952 during the Mosaddegh period. And what their strategy was to undermine Mosaddegh through Parliament. And a lot of money went into basically getting what the CIA thought would be their favorable candidates elected. And this we didn’t know before. But then you would see also that when they talk about, well, we need to get rid of Mosaddegh, they have 18 candidates the U.S. discusses who is suitable to have the next—

AMY GOODMAN: But when you talk about what wasn’t known and what was, you’re a professor, but most people don’t even know what was known, was the deep U.S.-CIA involvement—

AMY GOODMAN: —as the bag guy, the guy who comes with bags of money and actually overthrows Mohammad Mosaddegh, the democratically elected leader.

AMY GOODMAN: And they tried to get Kermit Roosevelt to do the same thing the next year, in 1954, in Guatemala. He refused, but they did it anyway and overthrew the democratically elected leader in Guatemala, Árbenz.

AMY GOODMAN: And when we hear discussions today about Russia interfering with our elections, I think it’s very important for people to understand U.S. history.

AMY GOODMAN: Let me ask you a last question about The New York Times last month naming the so-called dark prince to run the Iran operations, signaling a tougher stance, The New York Times reporting Michael D’Andrea now running the CIA’s Iran operations. He oversaw the hunt for Osama bin Laden, American drone strike campaign, that kills thousands of Islamist militants and hundreds of civilians. Your thoughts when you heard this and the anger of the Trump administration of revealing his name?

ERVAND ABRAHAMIAN: I don’t know the politics of that, really. I think, again, they’re very confused about what to do with Iran. And this is a reflection of that.

JUAN GONZÁLEZ: I’m just wondering if, in the documents—we’ve got about 30 seconds—you can across the name of Donald Wilhelm at all, who was a CIA guy who went to Iran after, after the overthrow of Mosaddegh, and who was actually the mayor’s—Mayor Bill de Blasio’s uncle?

ERVAND ABRAHAMIAN: It would be interesting to know something about—more about the family history. I don’t think there would be much political discussions between this part of the family and that part. He was kind of a CIA academic.

AMY GOODMAN: Well, we will leave it there. Ervand Abrahamian, thanks so much for being with us, retired professor of history at Baruch College, City University of New York. 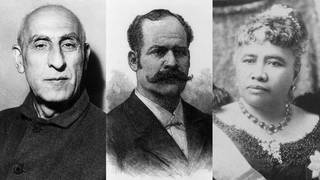