Tensions are again rising in the Korean Peninsula between the U.S. and North Korea. On Friday, North Korea tested an intercontinental ballistic missile that experts say is capable of reaching the West Coast of the United States. North Korea says the test was a warning to the U.S. to stop imposing sanctions against North Korea. In response to the test, the U.S. flew two B-1 bombers over the Korean Peninsula and tested its Alaska-based THAAD missile defense system. The U.S. has deployed a similar THAAD missile defense system to South Korea, despite objections from local residents. We speak with former Green Party presidential candidate Dr. Jill Stein, who just returned from a peace delegation to South Korea. Dr. Jill Stein was the Green Party’s presidential nominee in 2016 and 2012.

JUAN GONZÁLEZ: We turn now to the Korean Peninsula, where tensions are again escalating between the U.S. and North Korea. On Friday, North Korea tested an intercontinental ballistic missile that experts say may be capable of reaching the West Coast of the United States. North Korea says the test was a warning to the United States to stop imposing sanctions against North Korea. In response to the test, the U.S. flew two B-1 bombers over the Korean Peninsula and again tested its Alaska-based THAAD missile defense system. The U.S. has deployed a similar THAAD missile defense system to South Korea, despite objections from local residents.

AMY GOODMAN: Joining us now is former Green Party presidential candidate Dr. Jill Stein. She just returned from a peace delegation to South Korea that was sponsored in part by the Task Force to Stop THAAD in Korea and Militarism in Asia. Dr. Jill Stein was the Green Party’s presidential nominee in 2016 and 2012.

AMY GOODMAN: Talk about what you found in South Korea.

DR. JILL STEIN: It’s a pretty amazing situation. South Korea just had what they call their candlelight uprising. They just impeached a very corrupt and conservative president. And now they have really turned their candlelight uprising, which continues, to focus on the impacts of militarism, of nuclear weapons and the THAAD missile system. And they are calling for a peace treaty with North Korea—with North Korea. You know, the Korean War essentially is not over. There’s been an armistice, but the peninsula has lived under threat of war.

Recently, North Korea has been firing off the second ICBM, intercontinental ballistic missile, which is a very powerful and fast missile and is very frightening to other countries around the world. And they’ve also now developed their nuclear weapons capability. And, you know, it’s been this accelerating set of provocations now. North Korea has done this in a setting where the U.S. has been doing nuclear bomb mock runs, mock attacks with nuclear weapons, for decades, actually. And we also have a policy of a first strike of a nuclear attack against North Korea. So, understandably, North Korea has felt like they have to develop a nuclear weapon in order to, you know, have—stand a chance. So, that’s where we are.

It’s dangerous. It’s very dangerous, because Seoul, a city of 25 million people, is in the crosshairs of this conflict, and even a limited exchange of nuclear weapons could result in nuclear winter, which would—you know, in turn, is predicted to cause hundreds of millions of deaths around the world. So, this is a conflict we all have a stake in.

And it’s not rocket science about how to fix it. The North Koreans, the Russians and the Chinese have all been very clear about what they want, which is essentially a freeze on the—on the war games, this threatened nuclear attack from the U.S., in exchange for a freeze on their nuclear and their missile program.

JUAN GONZÁLEZ: Well, you mentioned the changing political situation in South Korea, which gets very little attention here in the United States. Is it your sense that there’s a possibility for the South Korean government to take independent action in terms of moving forward on defusing the tensions with the north? And if so, is the Trump administration’s—a lot of the bellicose nature of its pronouncements now really predicated to trying to stop any kind of reconciliation between the south and the north?

DR. JILL STEIN: Yeah, I mean, you know, the Trump administration seems to be doing what it knows how to do, which is to basically sell weapons and drum up conflicts in order to do that. You know, they seem pretty clueless about how to proceed. And with the chaos going on in the White House, you know, it’s questionable what they can do.

But there are saner voices that are beginning to be heard right now. The New York Times had an editorial this morning, actually, calling for negotiations. James Clapper himself has really come out quite strongly in favor of what they call a freeze for a freeze—freeze the war games in exchange for North Korea freezing its weapons program. And there are others.

We’ve done this before. Negotiations have actually worked in the past, during the mid-'90s. We were able to freeze for a period of about eight years the weapons development program, by sitting down and talking with North Korea. And then George Bush came in with his evil—you know, his “axis of evil,” and, actually, at that point, instituted a first-strike nuclear policy against North Korea, so, you know—and destroyed the trust and the negotiations. But we need to go back to that. It's like the Cold War, you know, all over again. We need to relearn those lessons. Right now, the instincts are to basically fire up the missiles and bring in more of them. It’s absolutely a disaster.

I should mention the THAAD missile defense system, because this is very provocative to China. You know, it’s like we’re taking the regime change paradigm from the Middle East, and we’re trying to apply it here in—on the Korean Peninsula, you know. And if you think it was a disaster in the Middle East, now add nuclear weapons and China and Russia. You know, this isn’t going to work, which is why I mentioned the nuclear winter thing, because we’re heading towards a mushroom cloud right now. You know, this is not like your regime change in the Middle East, which has been catastrophic enough. This is really on a nuclear dimension now. So, it just cannot go forward, and saner voices need to prevail.

AMY GOODMAN: Even the new South Korean president, Moon Jae-in, is against the THAAD missile system, didn’t even know that some new equipment was just brought into his own country when it came to THAAD, and called for immediate negotiations with North Korea. What happened?

DR. JILL STEIN: Yeah, it’s a good question. And the people of South Korea are really disturbed about this and are—you know, there are really strong demonstrations going on against him now. And it’s felt like he’s really betrayed the people, because he was very clear as a candidate that he supported a peace treaty.

AMY GOODMAN: But he called for this as president.

DR. JILL STEIN: That’s right. Well, you know, initially, as president, he did oppose THAAD. And then he’s done a real turnaround. Ever since his summit with Donald Trump, he’s really backed off. So, you know, I think what’s exciting now is that there is sort of an international coalition that’s developing among the peace and democracy groups between South Korea and the U.S. And we’re really both trying to work at both ends of the problem and to get the U.S. to back off and, likewise, to get South Korea to stand up for sovereignty. It has been essentially an occupied peninsula, occupied—it’s been a battleground, actually, of the great powers for the last century, initially occupied by Japan, then—you know, by Japan throughout the Second World War, and then immediately occupied by the Soviet Union and the U.S.

JUAN GONZÁLEZ: And your sense of—

DR. JILL STEIN: That’s right. I mean, China objects to the effort to isolate and punish North Korea. They don’t want to see North Korea destroyed. They’re not crazy about Kim Jong-un, either, it appears, but they don’t want a failed state on their border. They also don’t want the U.S. or a U.S. client state on their border, either. So they’re very committed to preserving North Korea, and they’re going to do that. The people of South Korea really want to get rid of the THAAD anti-missile system, because they see it as very provocative to China. They want to be left alone to deal with their relations in North Korea. And they have a very concrete sense of how they can begin a process. You know, they had an economic development joint program with the North Koreans. They want to be able to go back to that. They want to be able to take a step-by-step approach, starting with, you know, the negotiations for a peace treaty. 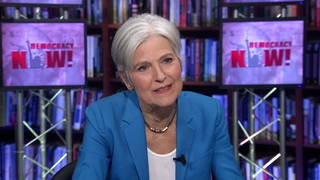