On Saturday, President Trump addressed reporters at his golf resort in Bedminster, New Jersey, blaming the violence in Charlottesville on “many sides.” We get response from Rev. Traci Blackmon, executive minister of Justice and Witness Ministries of the United Church of Christ. “What is happening under this current administration is permission to hate,” Blackmon says.

StorySep 04, 2017Nephew of Fascist Who Marched in Charlottesville & Former Neo-Nazi on Confronting Racists

AMY GOODMAN: Reverend Traci Blackmon, talk about what you said on Friday night in the church, but also what you think has come out of this weekend and your response to President Trump. Across the political spectrum, his comment, or lack of comment, has been decried. I just want to play it one more time, when finally forced to confront this issue, not singling out the violence of the white supremacists. This is Donald Trump speaking from his luxury golf resort in Bedminster, New Jersey.

PRESIDENT DONALD TRUMP: We condemn in the strongest possible terms this egregious display of hatred, bigotry and violence, on many sides—on many sides. It’s been going on for a long time in our country—not Donald Trump, not Barack Obama. It’s been going on for a long, long time. It has no place in America. What is vital now is a swift restoration of law and order and the protection of innocent lives.

REV. TRACI BLACKMON: Amy, thank you for the opportunity, because I think it’s important that we not leave this moment without contextualizing what happened in Charlottesville in a larger narrative, that has been promoted by this current administration. Some of Donald Trump’s remarks I appreciate—the fact that he says it’s been going on a long time in this country. Racism, bigotry, xenophobia, homophobia has been going on in this country a long time. But what is happening under this current administration is permission to hate. The hateful rhetoric of our current administration, not starting with Donald Trump, but starting with the eight years of the GOP laying a groundwork for it to be permissible to denigrate and to hate people based on their targeting of a black president, a president that they didn’t like before any decisions were made, a president that they met together against on the day of inauguration. So I’m not making this about the personhood of Barack Obama. I’m making this about white supremacy in this country. That laid a groundwork for the election of someone who ran, basically, on a hateful agenda. And the hateful remarks, the rhetoric that this president speaks and tweets, has created an environment where those who hate have permission to be safe in public spaces.

The thing that troubled me the most about my encounters this weekend was the fact—I’m from Birmingham, Alabama. I was raised there. I’ve seen Klan rallies before. The very last Klan rally that I witnessed in person, I was five years old, standing on a sidewalk watching the Klan rally go down the main street of Birmingham, Alabama, in the city. I don’t remember my fear. I remember my puzzlement in that moment. And emblazoned in my memory are those hooded sheets that they wore, as some were—road horses and some carried crosses and some carried flags. What sticks out for me is that we are now in a country and in a time where I witnessed masses of white supremacists walking down the main streets of Charlottesville, Virginia, emboldened enough to take the sheets off. These white people were wearing button-downs and polos and baseball caps. And I began to weep, knowing that it was quite possible that some of the people who were marching with these torches, shouting “Blood and soil!” shouting “You will not replace us!”—a ludicrous notion of white fear that has been strengthened and emboldened by an administration that is filled with hateful rhetoric—

REV. TRACI BLACKMON: And we now have a president who will not even to declare, will not even denounce white supremacy right out. It is unconscionable.

CORNEL WEST: I’ll just say that it’s very clear that Brother Donald Trump has neofascist sensibilities. His failure to condemn white supremacy and domestic terrorism means that he’s complicitous in effecting consequence. It was very important to keep in mind that even under Barack Obama, as brilliant as he was, it was still the rule of big money, massive militarism. The racism coming at him was vicious, but the inequality, the inability to speak to the issues of class—

CORNEL WEST: —makes it easier for right-wing populism, neofascism to flow. We’ve got to be critical of the system. 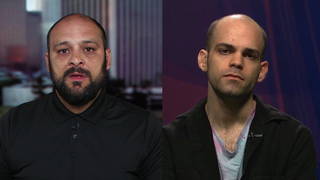