A crowd of activists toppled a Confederate statue in Durham, North Carolina, on Monday, just two days after the deadly white nationalist rally in Charlottesville, Virginia. As the crowd shouted “We are the revolution,” a college student named Takiyah Thompson climbed up a ladder, looped a rope around the top of the Confederate Soldiers Monument in front of the old Durham County Courthouse and then pulled the statue to the ground. She was arrested the following day on two charges of felony inciting a riot and three misdemeanor charges, including defacing a statue. Thompson was released last night on a $10,000 unsecured bond. We speak with Thompson about her actions before her scheduled court hearing this morning.

JUAN GONZÁLEZ: We begin today’s show in Durham, North Carolina, where a crowd of activists toppled a Confederate statue in Durham on Monday, just two days after the deadly white nationalist rally in Charlottesville, Virginia. The crowd of activists shouted “We are the revolution,” as a college student named Takiyah Thompson climbed up a ladder, looped [a rope] around the top of the Confederate Soldiers Monument in front of the old Durham County Courthouse and then pulled the statue to the ground as the crowd erupted in cheers.

AMY GOODMAN: On Tuesday, Takiyah Thompson was arrested on two charges of felony inciting a riot and three misdemeanor charges—injury to personal property, injury to real property and defacing a statue. She spoke in Durham just before she was arrested.

TAKIYAH THOMPSON: I think what we did was the best way, and not just the best way, but the only way, because the state and the Klan and white supremacists have been collaborating. Right? So what we did, not only was it right, it was just. I did the right thing. Everyone who was there, the people did the right thing. And the people will continue to keep making the right choices until every Confederate statue is gone, until white supremacy is gone. That statute is where it belongs, right? It needs to be in the garbage, incinerated, like every statue—every Confederate statue and every vestige of white supremacy has to go.

AMY GOODMAN: Takiyah Thompson, speaking in Durham, North Carolina. Shortly after she spoke, she was arrested, given a $10,000 unsecured bond. She was released last night, heads to court this morning. But just before she does, she joins us here on Democracy Now! Takiyah Thompson is a student at North Carolina Central University and a member of Workers World Party, Durham branch.

Welcome to Democracy Now!, Takiyah. I know you’re under enormous pressure as you head to court for—after being arrested for climbing a ladder, looping a rope around the top of the Confederate Soldiers Monument and pulling down the statue. Talk about why you engaged in this, and exactly what you did.

JUAN GONZÁLEZ: And, Takiyah, could you talk about how the events in Charlottesville influenced you or affected you, especially, obviously, the stunning symbols of those marches with torches on Friday night through the campus of the University of Virginia?

AMY GOODMAN: Can you talk about what happened when you were arrested, Takiyah? Where did they take you? You now had to post—cover $10,000 bond?

TAKIYAH THOMPSON: Right. Being arrested was in and out. I think the powers that be knew that if I wasn’t released in a timely manner, that, politically, that would not be a good move for them. So, I was in and out very quickly. As soon as I got there, people inside were recognizing me, so I know that they knew that, with the climate and the situation in the city, that they had to release me.

AMY GOODMAN: You’re charged with felony inciting a riot, three misdemeanor charges—injury to personal property, injury to real property and defacing a statue. Your answer to those charges?

JUAN GONZÁLEZ: I want to turn to President Trump speaking Tuesday at a press conference at Trump Tower in New York City.

REPORTER: I do love Thomas Jefferson.

JUAN GONZÁLEZ: Takiyah, what are you—what’s your response to the president equating the actions that have been occurring now with the—with taking the statues of George Washington or Thomas Jefferson down?

AMY GOODMAN: Takiyah, you’re certainly not alone in wanting statues taken down. Just today in the headlines, members of the Congressional Black Caucus have revived calls to remove all the Confederate monuments from the halls of Congress. People were protesting in places like Memphis, Tennessee, a large crowd linking arms, surrounding a monument of the former Confederate President Jefferson Davis. In fact, Robert E. Lee, the Confederate soldier, the monument to him in Charlottesville is what’s at the core of the controversy here, that they’re taking it down, said he did not believe in Confederate monuments. But Democratic Governor Roy Cooper of North Carolina, your governor, initially tweeted racism is “unacceptable but there is a better way to remove these monuments.” On Tuesday, he unequivocally said the statues must come down. And this is what he said.

GOV. ROY COOPER: Unlike an African-American father, I’ll never have to explain to my daughters why there exists a monument for those who wished to keep her and her ancestors in chains. Some people cling to the belief that the Civil War was fought over states’ rights. But history is not on their side. We can’t continue to glorify a war against the United States of America, fought in the defense of slavery. These monuments should come down.

AMY GOODMAN: So, your governor is saying these monuments should come down. You just took one down. He says, though, there’s a better way. Your response, Takiyah?

TAKIYAH THOMPSON: I’m going to let the governor breathe for now. I’m glad he made that statement. And—

AMY GOODMAN: Did he make that statement after you took the monument down?

TAKIYAH THOMPSON: I’m sorry, could you—what was that?

AMY GOODMAN: Did he make that statement after you took that monument down?

TAKIYAH THOMPSON: Yes, yeah, yeah. My problem with his initial statement was that he’s like, you know, “There’s no place for racism,” and then he goes on to say, “But there’s a better way.” And if there was a better way, we wouldn’t have been waiting almost a hundred years to do that. And like I’ve been trying to reiterate over and over again is that there is no “but” when we’re talking about racism, right? There is no “but” when we’re talking about people’s right to life and people’s right to not be psychologically attacked with these dehumanizing images. So, there’s only a right side and a wrong side. But I’m glad he did release that statement, and I’ll let him breathe.

AMY GOODMAN: And finally, Takiyah, Heather Heyer is being buried today. There is a memorial for her, a major memorial, in Charlottesville. She was on the streets, killed by the white supremacist who plowed his crowd [sic] into the anti-fascist protesters—plowed his car. What are your thoughts about Heather today, a white ally in this struggle?

AMY GOODMAN: Takiyah Thompson, I want to thank you for being with us. Takiyah now heads to court. She’s a student at North Carolina Central University. She climbed up a ladder this week, after the Charlottesville attack, looped a rope around the top of the Confederate Soldiers Monument in front of the old Durham County Courthouse, pulled the statue to the ground.

This is Democracy Now! When we come back, Bree Newsome joins us from Charlotte, North Carolina. Stay with us. 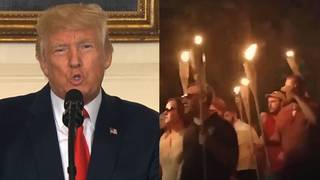 Ta-Nehisi Coates: Given Trump & GOP History of Racism, Violence in Charlottesville was Predictable