President Donald Trump continues to face outrage over his response to last weekend’s deadly white supremacist rally in Charlottesville, Virginia, where racism and anti-Semitism were on clear display. We speak with Steven Goldstein, executive director of the Anne Frank Center for Mutual Respect, which is calling on Twitter to suspend Trump’s personal account, after branding him an accomplice to domestic terrorism.

AMY GOODMAN: President Trump continues to face outrage over his response to last weekend’s deadly white supremacist rally in Charlottesville, Virginia, where racism and anti-Semitism were on clear display in scenes like this one, when torch-bearing protesters marched on the University of Virginia campus Friday night chanting “Blood and soil,” a phrase drawn from Nazi ideology.

AMY GOODMAN: At Saturday’s Unite the Right rally, neo-Nazis and Ku Klux Klan members also displayed swastikas on flags and banners as they protested the removal of a statue of Confederate General Robert E. Lee. Members of the local synagogue, Congregation Beth Israel, said that ahead of the protest, while they were praying, men dressed in fatigues and carrying semi-automatic rifles stood across the street from the synagogue, prompting people to leave the service from the back of the building in groups as a safety precaution. Later in the afternoon, Heather Heyer was killed, on Saturday, when a 20-year-old Nazi sympathizer named James Alex Fields plowed his car into a crowd of anti-fascist demonstrators. In another incident, white supremacists beat 20-year-old African-American protester Deandre Harris.

Following the protests, [Tuesday], the New England Holocaust Memorial was vandalized in Boston, Massachusetts, by a teenager who threw a rock through a glass panel etched with numbers symbolizing the numbers tattooed on the arms of Jews and others imprisoned in Nazi Germany’s concentration camps. The attack marked the second time this summer that Boston’s Holocaust Memorial has been vandalized.

It took until Tuesday for President Trump to place blame on white supremacists for the deadly violence in Charlottesville. During a news conference at Trump Tower, he attacked the counterprotesters, repeating his earlier claim that both sides were to blame for the violence. He also seemed to ridicule the national movement to remove Confederate monuments, saying the protesters would next want to tear down statues of George Washington and Thomas Jefferson. Trump also defended some of the white nationalist protesters who descended on Charlottesville.

AMY GOODMAN: On Thursday, President Trump took to Twitter to further complain that it’s, quote, “Sad to see the history and culture of our great country being ripped apart with the removal of our beautiful statues and monuments. … [T]he beauty that is being taken out of our cities, towns and parks will be greatly missed and never able to be comparably replaced!” he tweeted.

Now the Anne Frank Center for Mutual Respect is calling on Twitter to suspend President Trump’s personal account, after branding him an “accomplice to domestic terrorism.”

Welcome to Democracy Now! Explain what you’re calling for.

STEVEN GOLDSTEIN: Amy, Twitter has a choice here: It can stand with the love that Heather Heyer’s life stood for, or it can stand for the hatred that Donald Trump stands for. There are no two sides. Where is Twitter going to stand? Twitter is under no obligation, as a private company, to carry Donald Trump’s hatred. So, President Trump has two accounts. He has his POTUS account, and for the sake of free speech and getting his hate on record for future generations to look at it and to say “Never again,” listen, for those reasons, keep his presidential account. But he has a personal account, @realDonaldTrump, that amplifies his hate. Twitter doesn’t have to double down on hate. Twitter has a choice. Get rid of the @realDonaldTrump hatred account, not but better than the POTUS account. At least get rid of one.

AMY GOODMAN: Are you concerned about issues of free speech here?

STEVEN GOLDSTEIN: Well, again, he has his POTUS account. Free speech doesn’t mean that you have to give hate twice the megaphone, when he already has one megaphone. That seems, to us, a Solomonic solution.

AMY GOODMAN: Talk about his response. On Monday, a teleprompter news—he makes a teleprompter statement—some called it a hostage video—where he condemned and named the Ku Klux Klan, the white supremacists, the neo-Nazis, this directly contradicting what he had said two days before, when he said that all sides were responsible for the violence, and then, the next day, on Tuesday, reverting back to what he said on Saturday and particularly focusing on the fact that the white supremacists were—had a permit for their protest, unlike the counterprotesters.

STEVEN GOLDSTEIN: Well, Amy, I was horrified on Monday by the coverage of the mainstream media that applauded the president for his hostage news conference in which he read a teleprompter with all the energy of a power outage in New York City. He didn’t look like he meant every word—any word. He looked like there was a figurative gun to his head. He didn’t want to be there. And when I read the media reports, they said, “Aha, the president finally came out!” You’ve got to be kidding. The president said nothing after Charlottesville. Finally, he was forced to. Have we so normalized hate that that Monday press conference, that was scripted, should get applause?

AMY GOODMAN: Not even a press conference, a statement.

STEVEN GOLDSTEIN: And not even a press conference. But what kind of world has America landed in? Where is our morality, that we are settling for the crumbs of a fake condemnation? Now, we—

AMY GOODMAN: Well, we learned it was fake on Tuesday.

AMY GOODMAN: What does this have to do with Anne Frank? You’re executive director of the Anne Frank Center.

STEVEN GOLDSTEIN: So, let me say this. There are those—not in your audience—who would say, “Uh, Steven, aren’t you coming on a little too strong for the Anne Frank Center?” No. Anne Frank did not just write her diary as her own personal experience, which she included. She also wrote it as one of social justice’s greatest exhortations. She wrote that we have to act to prevent “never again.” So, Amy, “never again” is supposed to be an early warning system. If we don’t shout this danger from the rooftops, when will we? When history has taken its worst stages of progression? That’s when we’re going to shout it from the rooftops? Please.

AMY GOODMAN: Meanwhile, leaders—let me turn to leaders of four congressional caucuses demanding the White House fire senior aides Sebastian Gorka, Steve Bannon, Stephen Miller over their white supremacist views. In a letter to President Trump, the Congressional Asian Pacific American, Hispanic, Progressive and Black Caucuses wrote, “We are deeply concerned that their continued influence on U.S. policy emboldens and tacitly approves the ideological extremism that leads White supremacists to spread violence and hatred.” Talk about who Sebastian Gorka is today and also the calls, the exposé by the Jewish Forward about his ties to far-right Nazi groups in Hungary.

AMY GOODMAN: Let me play what President Trump had to say about him, insisting that Steve Bannon is not a racist.

PRESIDENT DONALD TRUMP: I like Mr. Bannon. He’s a friend of mine. But Mr. Bannon came on very late. You know that. I went through 17 senators, governors, and I won all the primaries. Mr. Bannon came on very much later than that. And I like him. He’s a good man. He is not a racist. I can tell you that. He’s a good person. He actually gets a very unfair press in that regard. But we’ll see what happens with Mr. Bannon. But he’s a good person. And I think the press treats him, frankly, very unfairly.

STEVEN GOLDSTEIN: Well, Donald Trump really is the expert on seeing whether somebody is racist? Give me a break. Come on. But, you know, I’m intrigued by that clip. We had Heather Heyer die on Saturday, and President Trump is talking about his alleged victory for president. How narcissistic can you get? What President Trump should have done in Trump Tower is be a leader, commune with our grief. And, Amy, this isn’t—this isn’t partisan, because we had—every president of the last few generations knew how to commune with grief. Not this president.

AMY GOODMAN: On Wednesday, neo-Nazi leader Richard Spencer spoke with Israeli media and compared his views to those held by Zionists. This is Spencer speaking to Channel 2 News Israel.

RICHARD SPENCER: As an Israeli citizen, someone who understands your identity, who has a sense of nationhood and peoplehood and the history and experience of the Jewish people, you should respect someone like me, who has analogous feelings about whites. I mean, you could—you could say that I am a white Zionist, in the sense that I care about my people. I want us to have a secure homeland that’s for us and ourselves, just like you want a secure homeland in Israel.

STEVEN GOLDSTEIN: Well, I’m a proud Jew. I’m a proud supporter of Israel. I’m a proud supporter of a two-state solution for Israel living side by side with an independent Palestinian state together in love and cooperation. That is repulsive. Wherever you stand on the Middle East—I don’t care if you’re left, right or center—what we just heard is repulsive. And President Trump is bad for the Israelis. He’s bad for the Palestinians. Talk about an opportunity to unify us. That was exploitation. I want to throw up.

AMY GOODMAN: I want to end with David Duke speaking in Charlottesville, Virginia, this weekend. The KKK leader said white nationalists are going to, quote, “fulfill the promises of Donald Trump’s presidency.”

DONALD TRUMP: If you see somebody getting ready to throw a tomato, knock the crap out of him, would you? Seriously. OK? Just knock the hell—I promise you, I will pay for the legal fees. I promise. I promise.

AMY GOODMAN: So that was President Trump then. And, of course, we see what he’s saying today. Final comments, Richard [sic] Goldstein of the Anne Frank Center?

STEVEN GOLDSTEIN: Steven Goldstein, but I have a brother Richard.

STEVEN GOLDSTEIN: I don’t mind. But listen, how is Melania’s cyberbullying campaign going? We see in that clip that there is almost no space—in fact, none—between Donald Trump’s rhetoric and David Duke’s rhetoric. We have a rhetorical convergence between the hate speech of the president of the United States and, as we saw in that clip, David Duke. That’s what America has become. And we can all weep. 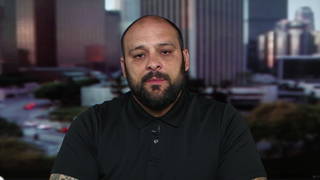