Pakistani Journalist: Why Is Trump Pushing for Failed Military Solution Instead of Diplomacy?

On Monday, President Trump announced an escalation of the U.S. war in Afghanistan. He also issued a warning to Afghanistan’s neighbor, Pakistan. President Trump went on to say that the U.S. would develop its strategic partnership with India, calling on the Modi government to help in Afghanistan. Observers say that the move might be a signal to Islamabad that the U.S. would back India in the struggle between the South Asian rivals, unless Pakistan severed ties with the Afghan Taliban and the Haqqani network, one of its factions. For more, we speak with Pakistani journalist Raza Rumi, editor of the national Pakistani newspaper the Daily Times and a professor at Cornell University and Ithaca College.

NERMEEN SHAIKH: We turn now to look at Pakistan. On Monday, President Trump announced an escalation of the U.S. war in Afghanistan. He also issued a warning to Afghanistan’s neighbor, Pakistan.

PRESIDENT DONALD TRUMP: We can no longer be silent about Pakistan’s safe havens for terrorist organizations, the Taliban and other groups that pose a threat to the region and beyond. Pakistan has much to gain from partnering with our effort in Afghanistan. It has much to lose by continuing to harbor criminals and terrorists.

NERMEEN SHAIKH: President Trump went on to say that the U.S. would develop its strategic partnership with India, calling on the Modi government to help in Afghanistan. Observers say that the move might be a signal to Islamabad that the U.S. would back India in the struggle between the South Asian rivals, unless Pakistan severed ties with the Afghan Taliban and the Haqqani network, one of its factions.

AMY GOODMAN: We go now to Ithaca, New York. We’re joined by Raza Rumi, Pakistani journalist who was targeted by a Taliban-affiliated militant group in 2014. His colleague was killed in that attack. Rumi moved to the U.S. soon after and now teaches at Ithaca College in New York. His book is titled The Fractious Path: Pakistan’s Democratic Transition.

Welcome to Democracy Now!, Rumi. Can you start off—Professor Rumi, can you start off by responding to what President Trump said in his Monday address?

RAZA RUMI: Yeah. I mean, Mr. Trump’s new strategy, or lack thereof, I mean, has been in the news both here and in Pakistan, which I have followed closely. And, you know, it is a real sad reflection that after 16 years of U.S. engagement in Afghanistan and its presence and spending trillions of dollars, the U.S. war machine still finds itself in a tight corner. I mean, there is no sign of a, quote-unquote, “victory.” And instead, the path that has been chosen has been that of scapegoating Pakistan, which itself has been rendered unstable due to the Afghan situation, you know, leading to nearly 70,000 deaths in Pakistan of both civilians and military.

And I think it is—Trump has a point about the safe havens to the Afghan Taliban and all of that. But at the same time, Pakistan has been trying to fight some of these militias and, you know, sort of punish them, as well, since the last three years. And all of that effort and all the country’s local situation has been ignored in this larger narrative of—which is a very U.S.-centric narrative, unfortunately. And I think the call to India is going to be even a more worrying sign, because India and Pakistan rivalry spans over seven decades. They’ve fought four wars, and they both are nuclear-armed states. And if you actually escalate that conflict in the region, it is not a very responsible thing to do for a superpower.

NERMEEN SHAIKH: Well, Raza Rumi, you mentioned—I mean, one of the groups that the U.S. is calling for the Pakistani government to sever ties with is the Haqqani network, which is an affiliate of the Taliban. Can you explain who the Haqqani network is and how it began?

RAZA RUMI: Well, I mean, Haqqani network is one of the leading factions within the Afghan Taliban. And the Haqqanis, originally, were trained and supported by the U.S. during the 1980s in the war against Soviet Union, when the Russians had occupied Afghanistan. And so you see we have a team here in this region of all the earlier experiments with Islamic militancy and propping up Islamic extremists against these evil Soviets. I mean, that has now come—taken a full circuit, and all these former allies have actually turned against the Western countries, like the U.S., who supported them in the first place. But that’s a separate story.

Haqqani network operates both in Afghanistan. It has close ties with Pakistan, Pakistan’s government and its, you know, security agencies. But it also has a presence in the Middle East, in the UAE and in other countries where it raises a lot of money and manages a lot of real estate and businesses.

But having said that, I mean, on the one hand, the U.S. says that they want Afghan Taliban, including the Haqqanis, to be part of the final solution or the reconciliation. On the other hand, they also want Pakistan to go and fight and attack them. So, either Pakistan can actually bring them on a negotiating table or fight. I mean, it can’t do both, because that’s a contradiction in terms. And I think this is the real confusion here. And over the last few years, the mistrust has grown so much between Washington and Pakistan that now it has come to this point where the Pakistani Army chief has responded by saying, “We don’t need your aid at all, and we need your trust.”

AMY GOODMAN: I wanted to quickly ask you—we have just 40 seconds—about the point that many have made that Trump is unlikely to pursue a diplomatic solution in Afghanistan, because, well, for example, there’s no U.S. ambassador there. The State Department had a special office working on a regional solution to the Afghan War, but Tillerson disbanded it. Your response to all this, in 10 seconds?

RAZA RUMI: Yes, absolutely. I mean, this whole Trump speech is a military solution, which has been tried and tested and failed. And, in fact, you know, what it needs is more diplomatic engagement and some more attention toward State Department, where hundreds of positions apparently are lying vacant, including that of the representative for Afghanistan and Pakistan. So, I guess it’s a bit of an alarming situation, because this military solution has not worked over the past 16 years. How is it going to work now?

AMY GOODMAN: Raza Rumi, we have to leave it there, Pakistani journalist targeted by the Taliban in 2014. He now teaches at Cornell and Ithaca colleges. 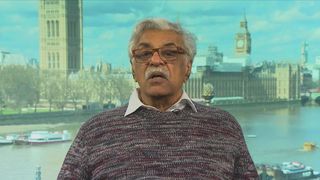