Update: On Friday, President Trump signed a directive to block transgender individuals from joining the military.

For more, we’re joined by Chase Strangio, who is staff attorney at the ACLU.

Chase, welcome back to Democracy Now!

AMY GOODMAN: It’s great to have you with us. Now, The Wall Street Journal is just reporting the existence of this memo. Yesterday, Sarah Huckabee Sanders said an announcement will be made. What about what has been outlined so far?

CHASE STRANGIO: Well, again, I mean, so far, there’s still no policy that we know of. Nothing has been transmitted to the Pentagon. But what we’re hearing, in terms of the nature of the policy that’s being solidified, is that it represents the same animus that we saw in the tweets. It is looking to ban people from enlisting, to restrict people’s access to healthcare and essentially restrict promotions and give the Department of Defense discretion to kick people out at will. So this is just the transparent discrimination that we’ve seen from the administration towards transgender individuals and so many others.

AMY GOODMAN: Senator Tammy Duckworth of Illinois, a decorated military veteran who was severely injured in Iraq, is urging Congress to block Trump’s announced ban. She wrote in a statement, “When I was bleeding to death in my Black Hawk helicopter after I was shot down, I didn’t care if the American troops risking their lives to help save me were gay, straight, transgender, black, white or brown. All that mattered was they didn’t leave me behind. If you are willing to risk your life for our country and you can do the job, you should be able to serve—no matter your gender identity or sexual orientation. Anything else is not just discriminatory, it is disruptive to our military and it is counterproductive to our national security. If the President enacts this ban, which would harm our military readiness, the Democratic and Republican Members of Congress who oppose this discrimination must enact legislation that prevents it from taking effect.” That’s what Senator Tammy Duckworth said. So, Chase Strangio, specifically talk about the issue of paying for medical care of transgender people in the military.

CHASE STRANGIO: Well, first, I think it’s important to remember that the House defeated an amendment to the NDA precisely on this issue just before the tweets. So the tweets represented the president’s frustration—and actually, probably, the vice president’s frustration—that they were not able to get such a ban through Congress. And now we see his sort of impulsive undermining of both the data, the science and everything else we know about transgender individuals serving, and his proposal now to restrict access to healthcare. The reality is that the military has a billion dollars in their budget for healthcare. This is a fraction of that. And what it reflects is a misunderstanding and discrimination of transgender individuals. But the costs are minimal. The care is necessary. There’s a scientific, a medical and a military consensus that this should be provided. And yet here—

AMY GOODMAN: And what is that care?

CHASE STRANGIO: I mean, the care really ranges. And this is just like any other medical care. It involves a patient and a doctor making a determination about mental healthcare, hormonal treatment and surgeries, many of which are already provided for other conditions, that don’t impact deployability any more than other conditions, and that we see these continued restrictions both in the context of now the military and efforts to restrict the care under the Affordable Care Act and elsewhere under this administration, that reflects bias, not medicine, that reflects stigma, not legal standards. And we are absolutely going to continue to challenge these issues in court.

AMY GOODMAN: It would ban transgender people from signing up, for being in the military?

CHASE STRANGIO: The proposed ban that we’re hearing from would ban enlistment, which could also implicate contract renewals of currently serving members, as well as restricting access to healthcare, as well as promotions. So, it’s essentially an effort to drive people out who are currently serving, restrict their benefits and also ban current people who are interested in enlisting from doing so.

AMY GOODMAN: How are people organizing against this? Again, this memo has not been announced.

CHASE STRANGIO: There’s already one lawsuit pending. There are going to be many more lawsuits once this becomes official policy. And we’re going to see people across the country resist the misinformation that this administration is circulating about transgender individuals and our healthcare, which is both medically necessary and life-saving.

AMY GOODMAN: The memo says that as for current trans troops, their leaders can expel them if they deem them not to be deployable. What does that mean?

CHASE STRANGIO: It’s not clear what that means. It sounds incredibly arbitrary. And there are already military regulations that bar separation based on a lack of universal deployability. So this is completely inconsistent with military policy.

AMY GOODMAN: Chase Strangio, thanks for joining us, of the ACLU. 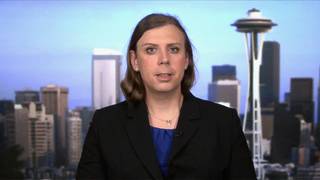