Hurricane Harvey has threatened the safety of immigrants in Texas who are afraid to evacuate to shelters or approach authorities to seek help, in part because of a new law set to go into effect Friday that allows police in Texas to ask people they detain for their immigration status. Ahead of the storm, the U.S. Border Patrol said its roadside immigration checkpoints in the state would remain open. The agency later modified their statement, saying, “Routine non-criminal immigration enforcement operations will not be conducted at evacuation sites, or assistance centers such as shelters or food banks.” More than 50 immigrant women and children were left stranded by immigration authorities at a bus station in San Antonio on Friday after bus service was canceled due to Hurricane Harvey. We speak with Rocío Guenther, a reporter with the San Antonio nonprofit news outlet The Rivard Report. She broke the story about ICE in her report headlined “Stranded Immigrants Find Shelter from Hurricane Harvey.” We also speak with Amy Fischer, policy director for RAICES, a Texas-based nonprofit legal advocacy organization that helped with the rescue of the asylum seekers.

AMY GOODMAN: I’m Amy Goodman, with Renée Feltz, a Houston native. In fact, Renée, your sister, how is she doing in Houston?

RENÉE FELTZ: Amy, my sister lives near one of the major bayous in Houston. And bayous are not a term many people are familiar with. It’s sort of like a river. It’s a major area where the water drains. And she also lives near two major freeways, where the water goes, as well. She has evacuated to friends that live on the third floor of their apartments. So, hi, Michelle, and hello to all my friends and to my former home at KPFT, the Pacifica radio station in Houston, Texas.

Well, we turn right now to look at how Hurricane Harvey and the epic flooding disaster has threatened the safety of immigrants in Texas who are afraid to evacuate to shelters or approach authorities to seek help, in part because of a new law set to go into effect Friday that allows police in Texas to ask people they detain for their immigration status.

Ahead of the storm, the U.S. Border Patrol said its roadside immigration checkpoints in the state would remain open. The agency later issued a statement that, quote, “Routine non-criminal immigration enforcement … will not be conducted at evacuation sites, or [at] assistance centers such as shelters or food banks.” Texas Governor Greg Abbott later echoed those claims in an interview with MSNBC.

AMY GOODMAN: This comes as more than 50 immigrant women and children were left stranded by immigration authorities at a bus station in San Antonio Friday at the same time bus service was canceled due to Hurricane Harvey. Volunteers had to find shelter for the families, most of whom were asylum seekers from Central America and had just been released from a private detention facility.

For more, we’re joined by two guests. In San Antonio, Rocío Guenther is with us. She’s a reporter with the San Antonio nonprofit news outlet the Rivard Report. She broke the story about how ICE—about ICE, in her report headlined “Stranded Immigrants Find Shelter from Hurricane Harvey.” And in Washington, D.C., Amy Fischer is with us, policy director for RAICES, a Texas-based nonprofit legal advocacy group that also helped with the rescue of these asylum seekers.

We welcome you both to Democracy Now! Rocío, let’s begin with you. You broke the story. What did you learn on Friday?

ROCÍO GUENTHER: Well, we learned, you know, through our social media and through our contacts—our office is actually like a few minutes away from the bus station. It’s walking distance. And this is routine. Women and children are always taken there on a routine basis. But in this case, during a natural disaster, the situation was quite different. Through contact with city officials who had learned about the situation, as well, we were able to find out, after I arrived at the bus station, where the immigrants were taken. And it was a local downtown church, so I walked to the scene. And not only were the women and children finding shelter at the church, but also they had opened up the church for homeless individuals who were trying to find refuge from the storm.

AMY GOODMAN: … understand. What did these immigrants have with them? And had the authorities been warned not to do this, without giving them any resources, just leaving them in a place that was about to be pummeled?

ROCÍO GUENTHER: Exactly. So, Congressman Lloyd Doggett actually had contacted ICE officials the day before and specifically had told them—he told the Rivard Report—to not drop off the women and the children there, because bus services would be canceled in the afternoon. So, even though Congressman Doggett gave that message, you know, families were still left at the mercy of that. And the volunteer organizations, if it wasn’t for them, you know, who knows where these women and children would have gone to find refuge?

RENÉE FELTZ: And I want to bring Amy Fischer of RAICES into this conversation. You helped to settle many of these women and children asylum seekers from Central American countries like El Salvador, Honduras, after they were discovered at the bus station. Can you talk about that and some of the concerns that are being raised as thousands of people in Texas are on the move, looking for shelter?

AMY FISCHER: Sure. So, luckily, there are volunteers that are at the bus station pretty much every single day, because this is a regular practice that ICE does, is that they drop families that are being released from detention at the bus station in San Antonio with no access to cellphones, no food, no resources, and really no way to communicate and navigate the busing system. So, luckily, there were volunteers that were already there at the bus station, and then they saw this large group being dropped off as the storm was heading into San Antonio.

So, our agency works with families when they’re in detention and after they’ve been released from detention. So we worked with the Interfaith Welcome Coalition on the ground to ensure that these families had a place to stay, they had food to eat, that they could communicate with their families and really be taken care of as the storm passed.

AMY GOODMAN: And what happened to the people who are in detention during this storm, Amy? Do you know?

AMY GOODMAN: We’re getting word that undocumented people in and around Houston are afraid, afraid of actually leaving, because what if they interact with authorities? Afraid of possibly being picked up, even in this extreme disaster. Now, Governor Abbott said they won’t check the ID if people seek shelter. Is that your understanding, Amy?

AMY FISCHER: So, we have been told that Texas officials will not actively check IDs of immigrants. But I think we have to recognize that this is happening days before a racist, anti-immigrant law is supposed to go into effect. So, SB 4 has essentially created a sense of fear throughout the state of Texas for everyone that is an immigrant or maybe looking like an immigrant.

And so, I think what our sense is on the ground is that people who may be undocumented simply just do not trust officials and what their word is, because we’ve seen them targeted even before the implementation of SB 4. We’ve seen them racially profiled. And, you know, a few years ago, when Hurricane Sandy hit New York, we saw an announcement from DHS that they would essentially pause immigration enforcement so that no family would have to make the decision between trying to survive a storm or seeking help and being subject to detention and deportation. And that simply did not happen.

AMY GOODMAN: Well, Amy Fischer, speaking of racial profiling, we’re going to move on to our last segment. I want to thank you for being with us, of RAICES. And, Rocío Guenther, a reporter with the Rivard Report, a San Antonio nonprofit news outlet, we’re going to link to your piece. 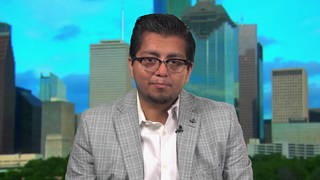