Elizabeth Kolbert: An Honest Conversation About Climate Change Is Needed in Wake of Irma & Harvey

At least four people have died and nearly 6 million people are without power in Florida, after Hurricane Irma made landfall on Sunday on the Florida Keys as a Category 4 hurricane. The storm also flooded the streets of downtown Miami, turning the city’s main strip, Brickell Avenue, into a three-foot-high raging river. Its arrival sparked one of the largest mass evacuations in U.S. history, with nearly 7 million people ordered to leave their homes. We speak to Pulitzer Prize-winning journalist Elizabeth Kolbert.

StoryFeb 11, 2014The Sixth Extinction: Elizabeth Kolbert on How Humans Are Causing Largest Die-Off Since Dinosaur Age

AMY GOODMAN: As the United States continues to deal with unprecedented floods and hurricanes, a new study has revealed climate change is also driving the mass extinction of parasites that are critical to natural ecosystems, and could add to the planet’s sixth great mass extinction event that’s currently underway. The report in the journal Science Advances warns about a third of all parasite species could go extinct by 2070 due to human activity. The loss of species of lice, fleas and worms could have profound ripple effects on the environment and might pave the way for new parasites to colonize humans and other animals with disastrous health outcomes.

This comes as scientists are warning that the Earth’s sixth mass extinction is already underway. In a study published last month in the journal Proceedings of the National Academy of Sciences, the researchers said billions of populations of animals have disappeared from the Earth amidst what they called a “biological annihilation.” They said the findings were worse than previously thought. Scientists say the main causes of the mass extinction of wildlife is human overpopulation and overconsumption, especially by the rich, the destruction of animals’ habitats, toxic pollution and climate change. The report also warns humans will be impacted by this mass extinction, writing, quote, “The resulting biological annihilation obviously will have serious ecological, economic and social consequences. Humanity will eventually pay a very high price for the decimation of the only assemblage of life that we know of in the universe,” unquote.

We’re joined now by two guests: Colin Carlson, lead author of the parasite extinction report published last week, Ph.D. candidate in environmental science, policy and management, University of California, Berkeley, and joining us via Democracy Now! video stream from Western Massachusetts, we’re joined by Elizabeth Kolbert, award-winning journalist and staff writer at The New Yorker magazine, where she has reported extensively on climate change. Her most recent piece is headlined “Hurricane Harvey and the Storms to Come.” She was awarded the Pulitzer Prize for her 2015 book, The Sixth Extinction.

We welcome you both to Democracy Now! Elizabeth Kolbert, let’s begin with you. As you see the coverage of what’s taken place in Texas with Hurricane Harvey and now as Hurricane Irma has barreled through the Caribbean, making landfall in Florida this weekend and heading its way up, can you talk about the connection between climate change and hurricanes?

ELIZABETH KOLBERT: Well, there are a few things that are pretty clear. One is simply that sea levels are rising. And sea level rise is actually accelerating, owing in large part to ice melt, accelerating ice melt, off of Greenland, actually. So we know that pretty clearly. And if you have higher sea levels, obviously, when you get a storm surge, it’s going to go higher and further inland. So that’s a very, you know, basic connection between hurricanes and sea level rise.

Then we also know that hurricanes draw their power—how they get their energy is from the surface waters of the ocean. So, that’s why we only get hurricanes in the summertime, right? Because they need warm water. And as water temperatures rise, theories suggest and models suggest that hurricane strength is going to rise. So, you’re getting this kind of weird argument about hurricane frequency. That’s not clear, what’s going to happen to hurricane frequency as water temperatures rise. But hurricane strength should rise, and we probably are already seeing that.

And the third thing we know is that warmer air holds more moisture. We’re getting more evaporation. And as you get more evaporation, you’re going to get more rain. And that’s pretty clear that we’re also seeing that, too, not necessarily in hurricanes, but just in rainfall, in general. We’re getting more of these very massive downpours. And that’s quite well documented.

AMY GOODMAN: So, can you talk about the—there’s two things going on. You have the president of the United States; in Texas, you have the leadership, the Republican leadership there—all well-known climate change deniers. But then you also have the media, which, outside of Fox, MSNBC, CNN have been fiercely critical of President Trump. But when it comes to coverage of these hurricanes—and it’s almost wall-to-wall coverage, explaining everything scientifically, how the surge is happening, except using the words “climate change” or “global warming” or “climate chaos.” Can you talk about the lack of discussion of climate change in this wall-to-wall coverage of these severe, more frequent hurricanes that we’re seeing?

AMY GOODMAN: On Thursday, Environmental Protection Agency Administrator Scott Pruitt appeared on CNN. He said, quote, “Here’s the issue. To have any kind of focus on the cause and effect of the storm, versus helping people or actually facing the effect of the storm, is misplaced.” He went on to say, quote, “What we need to focus on is access to clean water, addressing these areas of Superfund activities that may cause an attack on water, these issues of access to fuel. … Those are things so important to citizens of Florida right now. And to discuss the cause and effect of these storms, there’s the … place (and time) to do that. It’s not now.” Elizabeth Kolbert?

AMY GOODMAN: Reading from your piece in The New Yorker, coming storms, you write, “[A]s rainfall totals in Houston were topping forty inches, Secretary of State Rex Tillerson told Congress [that] he was planning to eliminate his department’s special envoy for climate change.”

You go on to say, “Lamar Smith, a Republican who represents parts of San Antonio, chairs the House Committee on Science, Space, and Technology. Smith has spent the better part of his career harassing climate scientists, and in a recent op-ed for the Daily Signal, a Web site sponsored by the conservative Heritage Foundation, he celebrated the effects of global warming, arguing [that] they were producing 'beneficial changes to the earth's geography.’” And you go on to talk about “At a town-hall meeting in April, Joe Barton, a Republican who represents parts of Fort Worth [and is the vice-chairman] of the House Energy and Commerce Committee, repeated the old denier canard [that] clouds are the cause of climate change. And, in June, House Republicans introduced a bill to prevent federal agencies such as the Department of Energy from considering the [societal] costs of carbon pollution when fashioning regulations.”

Elizabeth Kolbert, talking about using moments where people are distracted, deeply concerned about, for example—well, last week it was Texas. Rex Tillerson, the former CEO of the largest private oil corporation in the world, ExxonMobil, eliminates the—says he’s planning to eliminate the department’s special envoy for climate change.

ELIZABETH KOLBERT: Well, I think that what those—you know, what we have here is—and it’s, interestingly, true in both Texas and Florida. Florida’s governor has also tried to really systematically suppress discussion of climate change in a state like Florida, which is probably the state in the country that’s most vulnerable, certainly to the effects of sea level rise. And what we have right now, you could say, is an opportunity for citizens of those states to demand an honest conversation. And I actually saw a news report that the mayor of Miami, who’s a Republican, had demanded that there be a conversation about climate change. So, maybe people who are actually witnessing the effects will demand of their politicians that there be an honest conversation, because, unfortunately, they’ve sort of let these guys just natter on and really, unfortunately, give us nonsense—and very dangerous nonsense. And that’s becoming increasingly clear.

AMY GOODMAN: We’re going to break and come back to this conversation and talk, as well, to Colin Carlson. He’s a lead author of a report on climate change-induced parasite extinction. We’ve been speaking with Elizabeth Kolbert, who writes for The New Yorker magazine. Her latest piece, coming storms. Stay with us.

Scientists: Climate Change May Wipe Out a Third of World’s Parasites, with Disastrous Ripple Effects

NEXTScientists: Climate Change May Wipe Out a Third of World’s Parasites, with Disastrous Ripple Effects 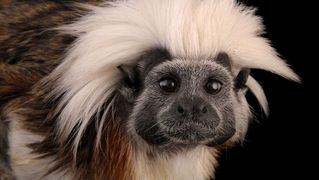 The Sixth Extinction: Elizabeth Kolbert on How Humans Are Causing Largest Die-Off Since Dinosaur Age