On Tuesday, President Trump gave his first address to the United Nations General Assembly, boasting about the size of the U.S. military and threatening to “totally destroy” North Korea. “[N]uclear war is a real threat,” says Jeffrey Sachs, leading economist and director of the Center for Sustainable Development at Columbia University. “It’s not some idle imagination right now. You have two leaders—both seem unstable—yelling at each other. Both have nuclear arms.”

NERMEEN SHAIKH: President Trump gave his first address to the U.N. General Assembly Tuesday, boasting about the size of the U.S. military, threatening to withdraw from the Iran nuclear deal, hinting at an intervention in Venezuela and threatening to “totally destroy” North Korea. The 40-minute speech was reportedly written by Trump’s senior adviser, Stephen Miller, and did not call out other authoritarian countries that are U.S. allies, including Egypt, Turkey and Saudi Arabia. In his sharpest of many threats, Trump called North Korean leader Kim Jong-un “Rocket Man” and said the U.S. was prepared to destroy an entire nation of 25 million people.

PRESIDENT DONALD TRUMP: The United States has great strength and patience. But if it is forced to defend itself or its allies, we will have no choice but to totally destroy North Korea. Rocket Man is on a suicide mission for himself and for his regime.

AMY GOODMAN: North Korea’s ambassador walked out of the U.N. General Assembly just as Trump took the podium. Iran’s government condemned Trump’s remarks as “shameless and ignorant,” while the Venezuelan president, Nicolás Maduro, said from Caracas Trump is the “new Hitler” of international politics. This is Jorge Arreaza, Venezuela’s chancellor to the United Nations.

JORGE ARREAZA: This is supposed to be the house and the headquarters of the peace and the international law. And what we heard was the opposite of that. It’s a president who comes for the first time and speaks about war, about destroying countries, about blockades against countries.

For more, we’re joined by Jeffrey Sachs, university professor and director of the Center for Sustainable Development at Columbia University. Professor Sachs is a leading economist, author of many books, including Building the New American Economy: Smart, Fair, and Sustainable. The book’s foreword is by Bernie Sanders.

JEFFREY SACHS: Thanks a lot.

AMY GOODMAN: So, you were there at the time that President Trump gave his first U.N. address before the General Assembly. Start with North Korea and take it from there.

JEFFREY SACHS: Horrifying. Of course, there was a shudder in the room. No president of the United States has declared from the podium of the United Nations General Assembly that the U.S. is ready to totally destroy a country. It was absolutely shocking. And the whole speech was grotesque, in my view.

NERMEEN SHAIKH: And what was the response amongst other member states and other people present in the General Assembly when he spoke?

JEFFREY SACHS: Well, you could hear shuffling, chuckles, amazement, gasps, a few applause. There was Netanyahu enthusiastically applauding. It was a very odd scene. I am still a bit shaken by it.

NERMEEN SHAIKH: And Secretary of State Tillerson was there, as was Ambassador Nikki Haley. Did you have the sense that there was some—that they were in agreement with what he was saying?

JEFFREY SACHS: Well, I suppose that they are, or they should get out of the administration. This is policy. And it is grotesque. And it is extraordinarily dangerous.

RI YONG-HO: [translated] If Trump was thinking about surprising us with the sound of a dog barking, then he is clearly dreaming.

AMY GOODMAN: That was the North Korean representative.

JEFFREY SACHS: I’ve been reminded often in these days of a statement by President John F. Kennedy, when he said in 1963 that in the nuclear age, to put an adversary at the choice of a nuclear war or a humiliating retreat, it would show the bankruptcy of our policy or a collective death wish for the world. President Kennedy was a great man. We have right now an administration which is endangering America and the world.

JEFFREY SACHS: First, we have to avoid a nuclear war. And a nuclear war is a real threat. It’s not some idle imagination right now. You have two leaders—both seem unstable—yelling at each other. Both have nuclear arms. Seoul, South Korea, is a few minutes—moments away from the North Korean arms. We’re—

JEFFREY SACHS: I’ve heard people say, “Well, South Korea, that would be collateral damage.” It’s unbelievable the way people are talking right now and how close we are to disaster and how complacent we are, because it’s unimaginable. Now, I’m not saying it’s inevitable, but I am saying it is absolutely being pushed right now recklessly. And, of course, what first needs to happen is to tamp down this kind of absolutely dangerous, provocative rhetoric.

The North Koreans made a statement a few days ago that was not well covered, which said, “We are looking for a military equilibrium to avoid a military option,” meaning “We don’t want to be overthrown by the United States.” The U.S., of course, is a serial regime changer. In fact, our foreign policy is based on covert and overt wars of overthrow of other countries: Saddam Hussein, Muammar Gaddafi, Bashar al-Assad—a disaster that has created absolute chaos, indeed all three of them. North Korea basically said a few days ago, “We don’t want to be overthrown.” Well, that is absolutely correct. We should have diplomacy politics, not a nuclear exchange.

AMY GOODMAN: And China’s role in this, what they can do?

JEFFREY SACHS: Well, China also doesn’t want chaos. China is calling every day for a diplomatic response. And we know that a diplomatic response is possible. Indeed, when the challenge was Iran, you had all five members—permanent members of the U.N. Security Council, plus Germany, making a historic agreement with Iran, precisely the one that Trump is attacking right now vis-à-vis Iran. So, we’re just pushing for war. It’s incredible.

AMY GOODMAN: Are you concerned that the whole investigation of Trump around Russian issues is—as the prosecutor is breathing down his neck, that he will do something rash internationally to distract attention?

JEFFREY SACHS: I don’t know if it’s to distract attention or whether he is just psychologically profoundly unstable—and he is—or just ignorant, which he is, or vicious and biased and stereotyping and without historical knowledge, which he is all of those things. So I don’t know what it will be. But I do know that the United States has a war tendency, and it is restrained only at the top, actually. And here you have a president who is egging on, provoking, himself unstable, without attention span. It’s extraordinarily dangerous.

And where is the Congress? Not one word by our Congress. It’s a disgrace, because under our Constitution, Congress has the only authority to declare war, and our Congress is useless, as we know, in this, because they’ve just ceded the authority to an imperial presidency. And now we have a president completely unfit and absolutely provocative every day. 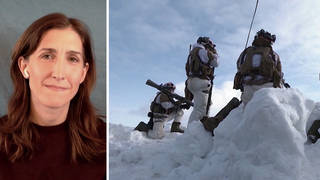