Foreign Policy recently published an FBI and Department of Homeland Security bulletin that concluded white supremacist groups were “responsible for 49 homicides in 26 attacks from 2000 to 2016…more than any other domestic extremist movement.” Despite these findings, the Trump administration recently slashed funds to organizations dedicated to fighting right-wing violence. One group, Life After Hate, which works to help white nationalists and neo-Nazis disengage from hate and violent extremism, was set to receive a grant under the DHS’s Countering Violent Extremism program, approved by the Obama administration. When Trump DHS policy adviser Katharine Gorka released the final list of grantees in June, Life After Hate had been eliminated. Gorka is the wife of Trump adviser Sebastian Gorka, who has been linked to a Hungarian far-right, Nazi-allied group. We speak with Christian Picciolini, co-founder of Life After Hate and former neo-Nazi skinhead gang member.

AMY GOODMAN: This is Democracy Now!, democracynow.org, The War and Peace Report. I’m Amy Goodman. Foreign Policy magazine recently revealed the existence of a recent FBI and Department of Homeland Security bulletin that concluded white supremacist groups are, quote, “responsible for 49 homicides in 26 attacks from 2000 to 2016…more than any other domestic extremist movement,” unquote.

Despite the FBI and DHS findings, the Trump administration recently cut funds to groups dedicated to fighting right-wing violence. One of those groups, Life After Hate, which works to help white nationalists and neo-Nazis disengage from hate and violent extremism, was set to receive a grant under the Department of Homeland Security’s Countering Violent Extremism program. The grant had been approved by the Obama administration, but when Trump homeland security policy adviser Katharine Gorka released the final list of grantees in June, Life After Hate had been eliminated. Gorka is the wife of former Trump adviser Sebastian Gorka. Sebastian Gorka has been linked to a Hungarian far-right, Nazi-allied group.

On the morning after the memorial in Charlottesville for Heather Heyer, I spoke with Christian Picciolini, who was once a leading neo-Nazi skinhead gang member and far-right extremist in the '80s and ’90s. He left the movement and co-founded Life After Hate. He's also author of Romantic Violence: Memoirs of an American Skinhead. I began by asking Christian Picciolini to talk about his response to what happened in Charlottesville.

CHRISTIAN PICCIOLINI: I think I went to bed, Amy, on Sunday with a sick feeling in my stomach, like most Americans did. But I have to tell you, what I saw last night, with the community gathering together, was what America means to me. I saw people of all different races, all different colors, creeds, religions, gathered together to pay homage to a woman who essentially gave her life to fight something that is very un-American. And that gives me hope. That gives me hope for America, because I know that we want to be able to live in a country where we can get along, where we have equal justice, where the systems of racism and the institutions are rebooted so that they’re fair for everybody. And I think that this is a turning point for America, because I think we can stop sweeping it under the rug and thinking that we don’t have a problem here. It’s time to face it head on and make sure that it doesn’t happen again.

AMY GOODMAN: Christian, when did you become a white supremacist?

CHRISTIAN PICCIOLINI: I was recruited at 14 years old in 1987. And I spent—

AMY GOODMAN: Where did you live?

CHRISTIAN PICCIOLINI: I was in Chicago, and that was the home and the birthplace of the American neo-Nazi skinhead movement. In fact, I was standing in an alley at 14 years old, and a man pulled his car up as I was smoking a joint, and he came over to me, and he said, “Don’t you know that that’s what the communists and Jews want you to do, to keep you docile?” At 14, I was a marginalized kid. I had been bullied. I didn’t know what a communist or a Jew or even what the word “docile” meant. But this man brought me into a family. He gave me an identity, and he fed my sense of purpose. While it was all misdirected, being marginalized and disaffected and feeling abandoned, I was willing to trade in the feeling of power, when I felt the most powerless, for something that was evil and eventually swallowed whole.

AMY GOODMAN: And can you talk about the groups you were in and what you did?

CHRISTIAN PICCIOLINI: I was a member of the Chicago Area Skinheads, which was America’s first neo-Nazi skinhead group. Eventually I became the leader of that group, when the man who recruited me, who was America’s first neo-Nazi skinhead, went to prison. I became the leader of this very infamous group, and we were involved in acts of violence. Our primary goal was marketing and recruitment. I started a band, which was a white power band, that had violent lyrics that incited people to go out and commit hate crimes. And that was a recruiting tool. It was a social movement to get people together, young, angsty teenagers who were angry at the world, who felt like they had been pushed aside and now were given somebody to blame for that.

AMY GOODMAN: What was it that started you moving away and questioning what you were doing?

CHRISTIAN PICCIOLINI: You know, for the eight years that I was involved, Amy, I had doubts the whole time. I came from an Italian immigrant family who came to the U.S. in the '60s, who were often the victims of prejudice, so I wasn't raised with these racist beliefs. It wasn’t part of my family DNA or fabric. And I questioned myself the whole time, but I squashed it because the power and the acceptance were more important to me, and I was scared to lose that.

But, essentially, over those eight years, I started to meet people who I had kept outside of my social circle, who I hated: African Americans and Jews and gay people. But the truth was that I had never had a meaningful interaction with them. But when I started to, I started to receive compassion from the people that I least deserved it from, when I least deserved it. They could have attacked me. They could have threatened me. They could have broken my windows. But they didn’t. And they knew who I was, and they took it upon themselves to show me empathy when I deserved it the least. And that helped me humanize them and dispel all the stereotypes that I had in my head. And suddenly, I couldn’t reconcile my hate anymore.

AMY GOODMAN: And what was the response of the other white supremacists in your group?

CHRISTIAN PICCIOLINI: Well, they certainly weren’t pleased. But luckily, I was a pretty selfish leader, and I never really groomed anybody to take over locally, so when I left, the group kind of imploded. However, I was a national and international figure at the time. And there were definitely threats, of calling me a race traitor, you know, insinuations that I had started working with police, which were not true. And I still to this day receive death threats almost on a daily basis.

AMY GOODMAN: I wanted to turn to a white supremacist at the Charlottesville rally this weekend. This is white supremacist Christopher Cantwell, who was speaking with Vice reporter Elle Reeve about, well, among other issues, Ivanka Trump.

CHRISTOPHER CANTWELL: I’m here to spread ideas, talk, in the hopes that somebody more capable will come along and do that, somebody like Donald Trump who does not give his daughter to a Jew.

ELLE REEVE: So, Donald Trump, but like more racist.

CHRISTOPHER CANTWELL: A lot more racist than Donald Trump. I don’t think that you could feel about race the way I do and watch that Kushner bastard walk around with that beautiful girl, OK?

AMY GOODMAN: That is white supremacist Christopher Cantwell. I’m sure you saw clips of him, this Vice interview, Christian. Your thoughts? In another part of this, they visit him where he’s staying, and he has one gun after another throughout his waistband that he brings out, and finally brings out a knife, and he says he’s well armed for more violence.

CHRISTIAN PICCIOLINI: This gentleman is an insecure—has no self-confidence and is clearly broken. There is something broken. I’m a firm believer that ideology isn’t what radicalizes people. I think it’s the search for identity, community and a sense of purpose. And if there’s some sort of brokenness, a void underneath that in your life—and it could be trauma or addiction or mental health issues, anything that would hold you back or deviate your path from the intended one that you were on—you tend to look for acceptance in negative pathways.

And it’s interesting that we brought up this clip, because I’ve actually reached out to this man, after I saw the videos, because he clearly needs help. And I want to offer him a compassionate ear to listen to what it is that is broken about him, because what we do at Life After Hate is, rather than argue ideologically with people, because we know that that just polarizes us further, we try to make the person more resilient, more competitive, more self-confident. And we do that by applying services, like mental health therapy or job training or life coaching or even tattoo removal. And when that person feels more confident, they tend to blame the other less. But I would follow that up with challenging their doctrine, not by telling them they’re wrong, but by introducing them to the people that they think that they hate. I may introduce a Holocaust denier to a Holocaust survivor, or an Islamophobe to spend the day with a Muslim family and have dinner. And it’s those connections, those moments, because most people have never met the people that they hate, that helps them humanize these people and dispel the ideas of them being a monster or a parasite. And that has been the most effective tactic that we’ve used.

AMY GOODMAN: Christian Picciolini, who was once a leading neo-Nazi skinhead gang member and far-right extremist in the '80s and ’90s, he left the movement and co-founded the group Life After Hate. When we come back, we'll host a discussion between Christian and a Fargo, North Dakota, activist whose uncle, who calls himself an open fascist, marched with the white supremacists in Charlottesville. This is Democracy Now! Back in a minute. 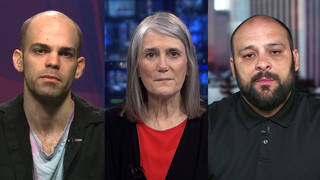 Life After Hate: Full Intv. with Nephew of Fascist Who Marched in Charlottesville & Former Neo-Nazi