New York City said Wednesday it will sue five fossil fuel giants over their contributions to global warming. The suit targeting BP, Chevron, ConocoPhillips, ExxonMobil and Royal Dutch Shell, came as New York City mayor Bill de Blasio announced plans to divest some $5 billion in fossil fuel investments from the city’s public employee pension fund. On Wednesday 350.org co-founder Bill McKibben tweeted, “One of the biggest days in 30 years of the climate fight. Earth’s mightiest city now in full-on fight with its richest, most irresponsible industry.” We speak to Subhankar Banerjee, professor of art and ecology at the University of New Mexico. Banerjee is the author of “Arctic National Wildlife Refuge: Seasons of Life and Land” and editor of “Arctic Voices: Resistance at the Tipping Point.”

The original content of this program is licensed under a Creative Commons Attribution-Noncommercial-No Derivative Works 3.0 United States License. Please attribute legal copies of this work to democracynow.org. Some of the work(s) that this program incorporates, however, may be separately licensed. For further information or additional permissions, contact us.
NEXTAs Erica Garner Is Mourned, Why Are Black Mothers in NYC Dying at 12 Times Rate of White Mothers? 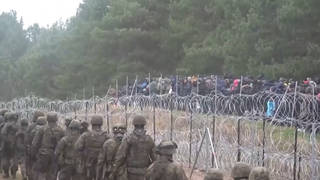