International condemnation of Donald Trump is growing after reports the president used an expletive during a meeting about immigrants from Africa, Haiti and El Salvador. While meeting with lawmakers, Trump reportedly said, “Why do we want all these people from Africa here? They’re shithole countries … We should have more people from Norway.” Trump also reportedly said, “Why do we need more Haitians? Take them out.” Earlier this morning, Trump wrote on Twitter, “The language used by me at the DACA meeting was tough, but this was not the language used. What was really tough was the outlandish proposal made–a big setback for DACA!” Trump’s remarks come weeks after The New York Times reported Trump had also disparaged Haitians and Nigerians during a closed-door meeting in June. Trump said Nigerians would never “go back to their huts” if they came to visit the U.S. As for Haitians, Trump said they “all have AIDS.” Trump’s latest remarks come just after his administration announced it is ending temporary protected status for up to 250,000 Salvadorans who have been living in the U.S. since at least 2001. Last year, the Trump administration announced it is also ending temporary protected status for tens of thousands of Haitian, Nicaraguan and Sudanese immigrants living in the United States. Trump’s remarks from Thursday have been condemned across the globe. We speak to Haitian-American novelist Edwidge Danticat as Haitians mark the eighth anniversary of the devastating 2010 earthquake.

International condemnation of Donald Trump is growing, after reports the president used an expletive during a meeting about immigrants from Africa, Haiti and El Salvador. While meeting with lawmakers, Trump reportedly said, “Why do we want all these people from Africa here? They’re s—hole countries … We should have more people from Norway.” Trump also reportedly said, “Why do we need more Haitians? Take them out.”

Earlier this morning, Trump wrote on twitter, quote, “The language used by me at the DACA meeting was tough, but this was not the language used. What was really tough was the outlandish proposal made–a big setback for DACA!”

Trump’s remarks come weeks after The New York Times reported Trump had also disparaged Haitians and Nigerians during a closed-door meeting in June, saying Nigerians would never, quote, “go back to their huts” if they came to the U.S. As for Haitians, Trump said, quote, they “all have AIDS.”

Trump’s latest remarks come just after his administration announced it’s ending temporary protected status for up to 250,000 Salvadorans who have been living in U.S. since at least 2001. Last year, the Trump administration announced it also is ending temporary protected status for tens of thousands of Haitians, Nicaraguans and Sudanese immigrants living in the U.S.

RUPERT COLVILLE: These are shocking and shameful comments from the president of the United States. I’m sorry, but there’s no other word one can use but “racist.” You cannot dismiss entire countries and continents as [bleep], whose entire populations, who are not white, are therefore not welcome. … The positive comment on Norway makes the underlying sentiment very clear. And like the earlier comments made vilifying Mexicans and Muslims, the policy proposals targeting entire groups on grounds of nationality or religion, and the reluctance to clearly condemn the anti-Semitic and racist actions of the white supremacists in Charlottesville, all of these go against the universal values the world has been striving so hard to establish since World War II and the Holocaust.

JESSIE DUARTE: Ours is not a [bleep] country. Neither is Haiti or any other country in distress. Obviously, we are in no position to stop any president from saying anything they wish to say. But all we can say is that developing countries do have difficulties. Those difficulties are not small matters. And it’s not as if the United States doesn’t have difficulties. There are millions of unemployed people in the U.S., millions of people who don’t have healthcare services or access to education. And we would not deign to make comments as derogatory as that about any country that has any kind of social, economic or other difficulties.

RENÉ CIVIL: [translated] In the name of the Haitian people, we are part of a patriotic emergency that is fighting for real change in Haiti. We demand that Donald Trump apologize before the entire continent, as well as before Haiti, the country whose blood has been used by ancestors who have served with their minds and bodies to liberate the United States itself from slavery. … Haiti is not a [bleep]. It’s a great country. It’s the mother of liberty.

We go now to Florida, where we’re joined by the acclaimed Haitian-American novelist Edwidge Danticat. She is a novelist, speaking to us from Orlando, Florida, author of a number of books, including The Farming of Bones, which won an American Book Award. She was born in Haiti, came to the United States when she was 12. We are speaking today to Edwidge, and on this day after Trump’s s—hole comments, on the eighth anniversary of the devastating Haitian earthquake that killed as many as 300,000 people.

EDWIDGE DANTICAT: Well, thank you, Amy. My response to President Trump is total condemnation. It was a very racist remark, which shed light on earlier decisions that he had—that have been made by the administration—for example, about temporary protected status being eliminated for Haitians and Salvadorans, and his remark, as reported by The New York Times, about all Haitians having AIDS. It seems like, once again, Haiti is being used as a foil, and he is baiting his bait and feeding them—Haiti as red meat.

And it’s extremely sad that it happened also in the shadow of this day. Today was going to be an extraordinarily sad day for many of us, anyway, who lost our family members, who lost our friends, in the devastating earthquake. So this is even more salt on our wounds. Not surprising, because of the nature of this presidency and the way this president conducts himself, but it is a terrible slight. It’s completely racist, especially the way that he paralleled Haiti and Africa, which is a continent, not a country—someone should tell him—and describing them in this manner and contrasting them to Norway.

AMY GOODMAN: Seems to be redefining the term “White House,” where he lives, in Washington, and what he wants to see in this country. Edwidge Danticat, we have been playing the responses of people around the world, from South Africa, one of those, as Donald Trump calls them, s—hole, but he uses the full expletive, though, inexplicably, this morning he’s kind of denying this in a tweet, though yesterday, when the White House was asked about this, they did not deny that he said this. I mean, there were so many congressmembers in the room. What does it mean for Haitian-American families, both the policy, what you’re facing, the loss of—what so many communities are facing, Haitian communities and Salvadoran, the loss of TPS, but also for your kids, when people hear these terms?

EDWIDGE DANTICAT: Well, that’s exactly where I was going to go. Now there are so many Haitian children who will be going to school today, and inevitably it will come up. And then they will have to—their parents, who are going to have to explain to the children why they don’t—you know, what the president has said and what kind of country they actually come from, and a country that—like Haiti, that has had difficulties, but that also the U.S. has played a hand in creating certain types of situations that has led, you know, to the level of poverty that we have, which doesn’t mean that we are not human beings, that we don’t have dreams, that we’re not trying very hard to keep our country going. So, it’s very disparaging.

AMY GOODMAN: Edwidge Danticat, what would you say if you were meeting with President Trump today at the White House?

EDWIDGE DANTICAT: I don’t think I would be meeting with President Trump, but I would use this opportunity that you have given me to tell him to just stop it. Stop it. I mean, he’s spewing white supremacist views that have real consequences in the lives of ordinary people. We already see it online, people who are jumping in and saying, “Of course what he’s saying is true.” And then there are people who will act on it, when they meet people like us. They will—who will exercise certain prejudices that affect the lives of the people he is talking about. But that also can lead to actual violence against our bodies, against our children. So I think he needs to realize that what he’s saying, from the biggest bully pulpit in the whole world, is affecting individual people. I don’t know that he cares, because I think he’s just spewing these things, and I think, in part, this was also—you know, this is what he believes.

But what he’s saying, from this very high position of power, affects the future of nations, affects the lives of individuals, affects how people—how policy is created. And now you have all these white supremacists and racists who feel so empowered, because, basically, the president of the United States has put them on—you know, has put a target on the backs of these people who he has described in this way, for them to be ridiculed, for them to be geared to have prejudices exercised against them and, in some cases, to have violence and, you know, assaults possible on their bodies, because these words are very—these words give permission to certain kinds of people. And we become then hypervisible in our vulnerability, because we have been singled out, not once—once in the policy with the TPS, once with the AIDS, and now with this, and as a group of people, as Haitians, and as people, he was saying, from Africa. And he’s singling out people for and making us targets for all kinds of possible attacks. And—

AMY GOODMAN: And finally, Edwidge, on this anniversary, this eighth anniversary of the earthquake in Haiti, that killed up to 300,000 Haitians?

EDWIDGE DANTICAT: Yes. Well, today—this is what we would have been doing today, would be remembering and thinking about our dead and commemorating these losses. But sadly, this has been muddled by this vicious attack by the president against our people at this time. So, it is important. We are still going to remember. We are still going to mourn. But to use a saying that many people of different backgrounds have been saying since the election of the president, “Today, we mourn. Tomorrow, we fight.”

AMY GOODMAN: Edwidge Danticat, we want to thank you for being with us, Haitian-American novelist, speaking to us from Florida, author of a number of books, including The Farming of Bones, which won an American Book Award. 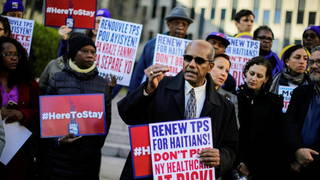