Rashid Khalidi on the U.S. Backing of Brutal Saudi Regime & the Disappearance of Jamal Khashoggi

It’s been more than a week since Saudi journalist Jamal Khashoggi disappeared after entering the Saudi Consulate in Istanbul last Tuesday, sparking international concern. Now, a Turkish official has told The New York Times that Khashoggi was assassinated inside the consulate by a team of 15 Saudi operatives who used a bone saw to dismember his body before smuggling body parts out of the building. We speak with Rashid Khalidi, Edward Said professor of Arab studies at Columbia University. He is the author of several books, including “Brokers of Deceit: How the U.S. Has Undermined Peace in the Middle East.”

AMY GOODMAN: Well, let’s talk about that. Let’s go to the missing Saudi journalist Jamal Khashoggi, who was last seen at the Saudi Consulate in Istanbul last week. A Turkish official told The New York Times Khashoggi was assassinated inside the consulate by a team of 15 Saudi operatives who used a bone saw to dismember his body before smuggling body parts out of the building. Turkey has now said it will conduct a search of the consulate. President Trump has yet to issue a formal statement on the disappearance, not even a tweet. He was asked about Khashoggi at the White House Tuesday.

REPORTER: Mr. President, have you spoken to the Saudis about the missing Washington Post columnist?

PRESIDENT DONALD TRUMP: I have not. No, I haven’t. But I will be, at some point.

REPORTER: What do you know at this point?

PRESIDENT DONALD TRUMP: I know nothing right now. I know what everybody else knows: nothing.

AMY GOODMAN: That was President Trump sitting in the Oval Office. Jamal Khashoggi—some call him Khashoggi [phon.]—is a columnist for The Washington Post. Last week, they ran a column of his, just a blank white column called “A Missing Voice.”

AMY GOODMAN: The significance of what has happened to him? I mean, he is not—he wan’t a dissident in the sense of, you know, a radical opponent of the Saudi regime. He was part of the loyal opposition.

RASHID KHALIDI: He was, but this is the most absolute iteration of the most absolute monarchy on Earth. I mean, this is pre-Magna Carta, pre-King John. This is Louis XIV. Absolute power. This regime, under Mohammed bin Salman, will not tolerate any dissent, and coming in particular from him or from members of the royal family, to some of whom he was close.

He was a very close adviser of Turki al-Faisal, the son of King Faisal, who was the head of Saudi intelligence and is Saudi ambassador to London and to Washington. So he was a person of the elite, intimately connected to the royal family. They are shutting down royals. They are shutting down people of prominent families. They’re taking their wealth in many cases. There are reports some of them have either disappeared or been killed.

So, we’re not any longer talking about low-level dissidents. We’re talking about the highest level within the royal family, within the elite families that have been profiting from the regime for generations. Nobody can raise their head in Saudi Arabia. Anybody who tells you that they’ve gone to Saudi Arabia and talked to people is talking through their hat. People don’t dare speak anymore. And the fact that they did whatever they have done to Jamal Khashoggi, so blatantly, indicates they’re trying to send a message: “Don’t you dare talk about what we are doing.”

AMY GOODMAN: And the Trump administration not responding? I think Mattis, who speaks with his Saudi counterparts often, when asked by a journalist, said, “We’re monitoring the situation closely.” When pressed how the Pentagon is monitoring, he said, “We’re doing so intellectually.”

RASHID KHALIDI: Yeah. I think that the Saudis must have calculated—Mohammed bin Salman and his father, the king, must have calculated—if the king had anything to do with it—must have calculated that they’re going to get a pass from Washington, that the contracts are too important, that the alliance is too important, that the billions of dollars that the United States gets out of arms and planes and other things in Saudi Arabia—banking, oil, obviously—is much more important to Washington than some dissident who was disappeared in Istanbul or the hundreds of thousands of Yemenis who are dying of diseases like cholera, that are completely treatable, because of the siege imposed by the Saudis and the Emiratis and their allies in Yemen. These things are obviously not important in Washington.

One would wish that our supine senators and our supine members of the House of Representatives would get up on their hind legs. They could actually affect this. The Trump administration won’t, but they could. And this is getting more and more egregious. I don’t know how much longer people are going to be able to stand the stench of this kind of absolute monarchy imposing itself and stamping out all kinds of basic freedoms, while offering basically token reforms. It’s wonderful that women can drive; it would be great if women could open their mouths. It’s wonderful people can go to cinemas; it would be great if they could freely buy books and talk and have newspapers which don’t reflect the king’s and the crown prince’s point of view. That’s freedom, and that’s what’s being denied to the Saudis.

And what Saudi Arabia and its allies are doing all over the region, in every country in which they are exerting influence, they are not working for democracy. They are working against democracy, against constitutions, against representative government.

AMY GOODMAN: And they’re working with the United States, for example, in Yemen.

AMY GOODMAN: Well, I want to thank you, Rashid Khalidi, Edward Said professor of Arab studies at Columbia University, the author of a number of books, his most recent, Brokers of Deceit: How The U.S. Has Undermined Peace in the Middle East. His next book, The Hundred Years’ War on Palestine, will be out in May.

This is Democracy Now! When we come back, we head to Minnesota to the valve turners, who will join us in studio. They were just acquitted. And we’ll speak with climate scientist James Hansen, who had hoped to testify at their trial. We’ll talk to him about climate activism and about the hurricane that’s bearing down on the Florida Panhandle. Stay with us. 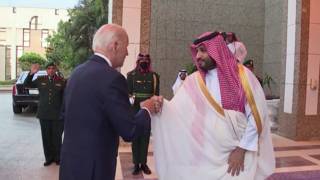