On November 6, California will be voting on a ballot initiative to expand rent control. Proposition 10 would repeal the Costa-Hawkins Rental Housing Act, a sweeping state law that permanently exempts some properties from rent control. The ballot measure has come under attack by landlords and private equity firms, including the Blackstone Group. We speak to Elena Popp, executive director of the Eviction Defense Network, one of the three organizations that put Proposition 10 on the ballot.

AMY GOODMAN: This is Democracy Now!, as we end today’s show looking at how next month’s election could impact California’s housing crisis. Will state residents gain access to a wider pool of rent-controlled housing? That’s one of the issues that will be put to the vote November 6 with Proposition 10, which would repeal the Costa-Hawkins Rental Housing Act, a sweeping state law that permanently exempts some properties from rent control. The ballot measure has come under attack by landlords and private equity firms, including the Blackstone Group.

We’re joined by housing rights attorney Elena Popp, executive director of the Eviction Defense Network, one of the three groups that put Proposition 10 on the ballot.

We don’t have much time. Lay out what Proposition 10 says.

ELENA POPP: Proposition 10 simply restores control over the ability to solve the housing crisis to local communities. It would allow local communities to pass stronger rent control laws that will cover more units.

AMY GOODMAN: So, what do the polls say?

ELENA POPP: The polls say that we’re down; however, those are polls of likely voters, and we are also making great progress in the last two weeks. We went from 38 percent support to 41 percent support. What’s happening is this barrage of negative and false advertising targeting homeowners, telling them that they are going to lose the value of their home, when the proposition does not affect single-family homeowners. There is not a single jurisdiction that has ever imposed rent control on single-family homes. And they’re also targeting seniors, saying that the proposition will make the housing crisis worse because it will deter development. There has been rent control in Santa Monica, Beverly Hills, San Francisco. Cities that have had rent control since the ’70s have had rampant development. Developers will develop, and every single local law exempts new construction.

I think what voters need to know, what they need to be told, is to follow the money. Look at who is investing $64 million and outspending us two to one to get this passed. And why are they doing it? Because $64 million is a minuscule portion of what their multibillion-dollar profits are if they are able to have uncontrolled rents. The “no” campaign is funded by the very people that brought us the housing affordability crisis. In L.A. city, an average 5 percent rent increase puts 2,000 people on the street. And we need to get this problem under control. Prop 10 is the first step to do that. Follow the money and vote yes on 10, is what I tell voters.

AMY GOODMAN: Well, we’ll continue to follow this, and we’ll be doing a 6-hour broadcast on election night, and we’ll let people know how you fare. Elena Popp is a housing rights attorney, executive director of the Eviction Defense Network, one of the three groups that put Proposition 10 on the ballot.

That does it for our broadcast. Special thanks to the crew here in Orange County: Brian Anderson, Josh Naper and Vivian Tran. 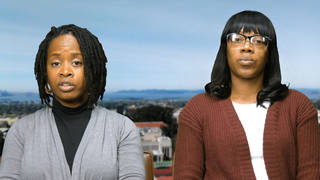