In the latest pushback against President Trump’s attack on immigrants rights, a federal judge in California has temporarily halted Trump’s asylum ban, which attempted to deny asylum to anyone entering the country from outside of a legal port of entry. Trump announced the move earlier this month, but Monday, U.S. District Judge Jon Tigar put a temporary halt on the order. Tigar wrote, “Asylum seekers will be put at increased risk of violence and other harms at the border, and many will be deprived of meritorious asylum claims. The government offers nothing in support of the new rule that outweighs the need to avoid these harms.” We speak with one of the lawyers who sued the Trump administration over the ban, legal director for the Center for Constitutional Rights Baher Azmy.

JUAN GONZÁLEZ: We begin today’s show in California, where a federal judge has temporarily halted President Trump’s new asylum ban, which attempted to deny asylum to anyone entering the country from outside of a legal port of entry. Trump announced the move earlier this month as he escalated his attacks on the Central American migrant caravans.

PRESIDENT DONALD TRUMP: People can come in, but they have to come in through the ports of entry, and that, to me, is a very important thing. … We’re not letting them in, but they’re trying to flood our country.

JUAN GONZÁLEZ: Well, on Monday, U.S. District Judge Jon Tigar put a temporary halt on the order, writing, quote, “Plaintiffs and the immigrants they represent will suffer irreparable injury if the rule goes into effect pending resolution of this case. Asylum seekers will be put at increased risk of violence and other harms at the border, and many will be deprived of meritorious asylum claims. The government offers nothing in support of the new rule that outweighs the need to avoid these harms.”

AMY GOODMAN: In response to the court’s ruling, ACLU attorney Lee Gelernt, who argued the case, said, quote, “This ban is illegal, will put people’s lives in danger, and raises the alarm about President Trump’s disregard for separation of powers. There is no justifiable reason to flatly deny people the right to apply for asylum, and we cannot send them back to danger based on the manner of their entry. Congress has been clear on this point for decades.”

We now go to San Francisco, where we’re joined by one of the lawyers who sued the Trump administration over the ban, the Center for Constitutional Rights legal director Baher Azmy.

Welcome back to Democracy Now!, Baher. Can you explain the judge’s ruling and how significant this is?

BAHER AZMY: Good morning, Amy. Yeah, this is another important judicial ruling checking arbitrary executive action by the Trump administration, in this case attempting to overrule 40 years of clear congressionally mandated asylum law by the stroke of a pen. Congress has written very clearly in the Immigration and Nationality Act that individuals are entitled to apply for asylum whether they make that—whether they enter the United States at a port of entry and subject to routine inspection or whether they enter outside a port of entry, whether they cross, what the government would say, unlawfully.

And that’s a protection that codifies the United States’ obligation in very long-standing and important international human rights principles, which recognizes that refugees fleeing often unspeakable violence need to have a safe haven without being so regulated by the government, and in light of the sort of practical reality that refugees fleeing violence, often with nothing more than the clothes on their backs, don’t necessarily understand the difference between a port of entry and other places to enter. So this is a significant victory for the rule of law and for the basic protections, humanitarian protections, of asylum law.

JUAN GONZÁLEZ: And, Baher, the law even stipulates not just people who have crossed illegally into the United States, but also people who are interdicted in international waters or in U.S. waters but who seek asylum, as well, doesn’t it?

BAHER AZMY: I think the interdiction piece on international waters is a little bit tricky, but what’s totally unambiguous is that the individuals who are entering the United States across the southern border are entitled to apply for asylum and make a case that they have a well-founded fear of persecution and may suffer violence, torture or death if returned to their home countries.

BAHER AZMY: Yeah. That was a really—that’s a really significant point that the judge made, and throughout the hearing expressed deep skepticism about the factual basis for this rule. And in a way, it looks a lot like the Muslim ban and, I think, is, in many ways, motivated by the same hostility towards noncitizens. And so, you know, the Muslim ban is a sort of total—attempted total shutdown of Muslims in airports, and this, combined with other actions that reflect deep hostility to asylum laws, looks like an attempted shutdown of the southern border to Central and Southern Americans.

And it’s true, there was no evidence to justify this so-called emergency action. The Trump administration talked about a crisis, but the truth is, migrations at the southern border are at historically low rates, and apprehensions by Customs and Border Protection outside of ports of entry are also at historic lows, a fraction of what they were in the year 2000.

And so, this is gratifying, because sometimes in courts of law, as opposed to in presidential press conferences or these one-off proclamations, courts can hold the executive branch to an obligation of reason and evidence and rationality. And I think what the court implicitly recognized here is this is arbitrary action that is unlawful.

JUAN GONZÁLEZ: What about the procedural issue that this order was issued without any public notice or chance for public comments or any of the normal procedures that would come about as a result of this kind of administrative decision?

BAHER AZMY: Yeah, that’s a very important point, as well. They issued this—federal law, congressional law requires that when agencies make substantial changes to agency rules, they have to publish them and invite notice and comment. And the administration attempted to bypass that really important requirement by, again, claiming a crisis and claiming foreign affairs power. But there is no crisis, as the judge implicitly recognizes, that would permit the administration to bypass notice and comment, and there’s no—you know, the court was rightly skeptical of this sort of broad claim of foreign relations power, emergency executive power.

And what’s critical about the attempt to forego the notice and comment process, which at its core is an attempt to ensure transparency and democratic accountability and prevent bureaucratic error—but by bypassing it, in this case, and preventing our clients, who are prominent, grassroots immigrant rights organizations that are expert in migration patterns and the consequences and impacts on asylum seekers, they were denied the opportunity to correct the false and misguided assumptions that underlie this executive order.

And had they been able to provide notice and comment, they would have been able to inform the public that there is no migration crisis, that caravans are in fact routine and done in order to protect the safety of migrants, that apprehensions are at historic lows and that the attempted rationale here of the administration, of sort of a tidy attempt to—incentive to channel people from outside of ports of entry to ports of entry, is just wildly unrealistic, given the realities on the ground.

JUAN GONZÁLEZ: So, Baher, given the fact that this is so obviously—this order was so obviously in contradiction to existing law, and as devoted as President Trump’s attorneys may be to him, they know how to read the law, what do you think was behind this effort of the Trump administration to declare this ban?

BAHER AZMY: Well, you know, I can’t speak to what the lawyers were thinking, but I think—and this came through a little bit in the hearing, as well—given the absence of any legitimate rationale for this particular rule, this is starting to look like the obvious broad-based attack on the very nature of asylum law in this country.

We can see that from not only this rule, but the family separation policy, which was designed to impose maximum cruelty in order to deter individuals from seeking asylum, from rhetoric coming from high-level administration officials calling asylum a legal loophole, despite our decades-long obligation to asylum principles. And, importantly, as we’ve revealed in another lawsuit filed in San Diego, even at ports of entry the administration is consistently denying individuals access to the asylum process by making misrepresentations about the unavailability of asylum, by asking the Mexican government to intercept individuals and sort of push them away from ports of entry, and by engaging in a system of metering, which is designed to slow down to a crawl the possibility of seeking asylum.

And we’ve been hearing that there are anticipated waits of up to six weeks to access asylum process even at ports of entry, in places that are extremely dangerous, and which in fact drive people, in desperation, to try and cross outside the ports of entry. There is a deep humanitarian crisis happening in the Northern Triangle countries, and people are fleeing unspeakable violence and persecution, and our obligation under basic human rights principles is to accept their applications and see if in fact they have a bona fide fear of return to their home countries.

AMY GOODMAN: Baher Azmy, finally, what happens now? So, the judge has ruled, temporarily blocked this ban. What’s the next step?

BAHER AZMY: He has invited both sides to make additional evidentiary and legal submissions in the coming weeks, and has ordered another hearing in a month, on December 19th, where he will consider issuing a kind of final injunction barring this rule from going into effect. But from now until then, this rule is deemed unlawful and enjoined.

AMY GOODMAN: And then, eventually, depending on which side wins, this goes to the Kavanaugh Supreme Court?

BAHER AZMY: You know, hard to say eventually if it will wind up in the Supreme Court, but it would likely—either side who loses would appeal to the 9th Circuit Court of Appeals, and then it wouldn’t surprise me if it wound up in the United States Supreme Court.

AMY GOODMAN: Well, I want to thank you very much for being with us, Baher Azmy, legal director for the Center for Constitutional Rights, in San Francisco right now, where a judge just handed down this extremely significant ruling, stopping Trump’s attempt to stop migrants from applying for political asylum outside of legal ports of entry.

When we come back, we speak with Frontline, ProPublica investigative reporter A.C. Thompson on the rise of neo-Nazis in America. Stay with us. 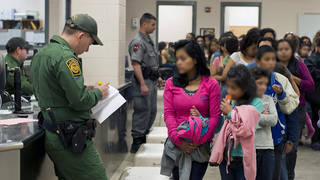