Facebook is under fire again, this time for new revelations that Russian trolls targeted African Americans on social media in an effort to influence the vote ahead of the 2016 election. A pair of bipartisan reports published by the Senate Intelligence Committee Monday claim the Russian government focused on African Americans in its effort to suppress the turnout of voters likely to cast ballots for Hillary Clinton, spreading fake news and sowing discord in the run-up to the election. The NAACP has launched a Facebook boycott in response, demanding the social media giant be held responsible. We speak with Derrick Johnson, president and CEO of the NAACP.

StoryOct 25, 2019“You Won’t Take Down Lies or You Will?”: AOC Grills Facebook’s Zuckerberg on Lies in Political Ads

NERMEEN SHAIKH: We turn now to new revelations that Russian trolls targeted African Americans on social media in an effort to influence the vote ahead of the 2016 election. A pair of bipartisan reports published by the Senate Intelligence Committee Monday claimed the Russian government focused on African Americans in its effort to suppress the turnout of voters likely to cast ballots for Hillary Clinton, spreading fake news and sowing discord in the run-up to the election. The disinformation effort was conducted by the Russian state-supported Internet Research Agency, or IRA. The IRA cultivated black audiences and recruited African Americans as assets on Facebook and Instagram.

In response, the NAACP has launched a 1-week digital boycott of Facebook, demanding the social media giant be held responsible for allowing the disinformation campaign. The civil rights group says Facebook has a history of data breaches that unfairly target users of color. The NAACP has also returned a recent donation it received from Facebook, in protest.

AMY GOODMAN: The boycott comes as The New York Times reports Facebook gave intrusive access to users’ personal data to dozens of other Silicon Valley companies, exempting them from Facebook’s privacy rules, even as it misled its users into thinking their data was protected. The Times investigation found companies like Microsoft, Spotify, Netflix, Amazon were given access to far more Facebook users’ data than even Cambridge Analytica, the British PR firm that collected the data of 87 million Americans in a bid to sway the 2016 presidential election for Donald Trump. The data sharing appeared to violate terms of a 2011 consent agreement with the Federal Trade Commission on user privacy.

For more, we’re joined by the president and CEO of the NAACP, Derrick Johnson.

Welcome to Democracy Now! It’s great to have you with us. Talk about the digital boycott you’ve launched.

DERRICK JOHNSON: Well, good morning, and thank you for having me on your show.

The NAACP, after reviewing several incidents over the past year, we became concerned with Facebook’s lack of responsiveness. We’ve seen a pattern of deny and delay.

They’ve hired an outside PR firm to do opposition research on African-American groups and individuals. They have a corporate culture which allows them to target African Americans in an effort to subvert democracy and suppress the vote. We have long had concerns with the lack of corporate diversity in their C-suite and on the board.

And all of these things have come together for us to say we must take action so they can really own up to their responsibility and remedy some of the harm and damages they’ve committed against the African-American community.

NERMEEN SHAIKH: Well, Derrick Johnson, could you say what you think—what have been the effects of Facebook doing—of allowing this kind of thing to happen? I mean, what kind of influence did they actually have?

DERRICK JOHNSON: Well, you know, you think about African-American usage of Facebook. We over-index with that tool. And if they have allowed the data, personal data of individuals, to be utilized by a foreign nation in an attempt to subvert democracy, but, most importantly, the festering racial intolerance and hate that we’ve seen over the last two years, if their platform was a part of creating this environment, they must make the necessary modifications and begin to remedy those problems.

In addition to that, there are pending lawsuits against Facebook because they’ve also allowed their tool to be used to discriminate in terms of housing purchases and other consumerism opportunity, for African Americans are being excluded as a result of their platform. There is a lot wrong with Facebook today.

AMY GOODMAN: Facebook just announced an update in its—in the progress of its civil rights audit and said that the NAACP is one of the organizations it consulted. Can you talk about this and also your call, the NAACP’s call, for Mark Zuckerberg and Sheryl Sandberg to step down from the board of Facebook?

DERRICK JOHNSON: Well, you know, we’ve asked our members, and, as an organization, we’ve also logged off Facebook as a sign of protest. We did that because we began to realize that Facebook really has not taken any immediate steps and see the concern of the American-American community and Americans in general. Anytime you allow such data breaches or you’re providing openly private informations to other companies without permission of users, that’s a problem. And so, we’ve asked our supporters, our members and our partner organizations to log off as a show of solidarity and protest.

AMY GOODMAN: Can you talk about what you understand happened, how the black community was targeted?

DERRICK JOHNSON: So, first of all, anytime you have a corporation like Facebook, who hire an outside PR firm and that PR firm begins to do opposition research targeted at African-American groups and individuals, that’s a corporate cultural problem.

Secondly, we over-index. And anytime they did not prevent a foreign nation to use their platform, targeting individuals using issues of racial hate or division, specifically around African Americans’ long-standing issues in this country, that’s a problem. Anytime you have a set of employees who lack the cultural sensibilities or understanding the uniqueness of the African-American experience, and they are able to create false equivalencies between conservative views and civil rights issues, that’s a problem.

AMY GOODMAN: Well, I want to go to Facebook CEO Mark Zuckerberg speaking during a press call last month during which he dismissed claims that Facebook ignored Russia’s election meddling or undermined investigations.

MARK ZUCKERBERG: I’ve said many times before that we were too slow to spot Russian interference, too slow to upend it and too slow get on top of it. And we certainly stumbled along the way. But to suggest that we weren’t interested in knowing the truth or that we wanted to hide what we knew or that we tried to prevent investigations is simply untrue.

NERMEEN SHAIKH: So, Derrick Johnson, that’s Mark Zuckerberg. Do you agree that it was—what Facebook is guilty of is a crime of omission, not of commission? In other words, that they did nothing to prevent—that they were slow to spot what was happening, but they did not in any way obstruct an investigation once they knew?

DERRICK JOHNSON: Well, for us, you know, we’re not going to get into what they did or did not do. We are going to get into the impact of their actions or lack thereof. The outcome is what I’m more concerned about.

So, how they got there, why they got there, what steps they’ve taken and stumbled along the way becomes irrelevant. It’s the outcome, the impact, that we’re most concerned about. And we have not seen a sense of urgency or priority by Facebook to remedy the harms they’ve created.

AMY GOODMAN: Before we go, I wanted to ask you about the latest news out of the Senate, the Senate unanimously approving a bill to make lynching a federal crime, sponsored by the Senate’s three African-American members—Democrats Kamala Harris, Cory Booker and Republican Tim Scott. Since 1918, over 200 anti-lynching bills had been introduced in Congress; all of them were voted down. The significance of this?

DERRICK JOHNSON: Well, it is huge. NAACP, we are 109 years old. We were created as an anti-lynching organization. And now we have finally seen the outcome of a long journey of creating a federal policy to make anti-lynching crime something of significance.

The three of them taking leadership on this foundational issue for African Americans is a significant moment in history, and we should all celebrate their courage, their vision and their strength to make it happen.

AMY GOODMAN: And finally, the Senate also approving the bipartisan bill that would roll back sentences for federal prisoners, about a tenth of the prison population of this country, rolling back mandatory life terms for third-time offenders, as well as mandatory sentences for nonviolent drug users and those convicted of firearms crimes. It’s an astounding array across the political spectrum, the number of Republicans who joined Democrats in voting for this. Your thoughts?

DERRICK JOHNSON: I think it is a great step in the right direction, all of the Senate members who stepped up to recognize that: What a waste of our tax dollars and our human capital resources when we throw people away for small mistakes. Many of us are sitting in positions of significance only because we didn’t fall into a particular trap or we didn’t get caught in that particular trap. There is so much to be offered for—by so many individuals. If we can get this same type of reform as relates to the 50 states’ sentencing reform laws, we could be a better nation for it. There’s so much talent that’s been thrown away in this nation, and we need to prevent that from ever happening again.

AMY GOODMAN: How do you see moving this from federal prisoners to all of the prisoners, you know, bills targeting all prisoners, over 2 million, the largest prison population in the world?

DERRICK JOHNSON: I think this is a step in the right direction. The federal policy landscape sets an example for state policymakers to consider their decisions, to get away from the profitizing of individuals being incarcerated, and understand that we need to address some of the social ills to prevent individuals from having to fall into certain traps. But more importantly, this last election cycle also gave us a tremendous opportunity: Amendment 4 in Florida, where 1.4 million individuals are now re-enfranchised. Fifty-nine judges—

AMY GOODMAN: Although the new Republican governor says he’s going to try to stop that.

DERRICK JOHNSON: Well, you know, the civil rights song is “Freedom Is a Constant Struggle.” So we’ve got to continue to push. But what a tremendous message the voters in Florida sent by passing that amendment. And yes, there will be some pushback.

AMY GOODMAN: Derrick Johnson, we’re going to have to leave it there, but I thank you so much for being with us, president and CEO of the NAACP.

“You Won’t Take Down Lies or You Will?”: AOC Grills Facebook’s Zuckerberg on Lies in Political Ads 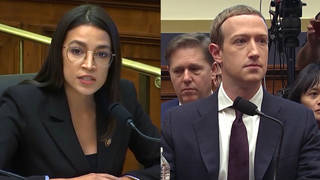 “You Won’t Take Down Lies or You Will?”: AOC Grills Facebook’s Zuckerberg on Lies in Political Ads