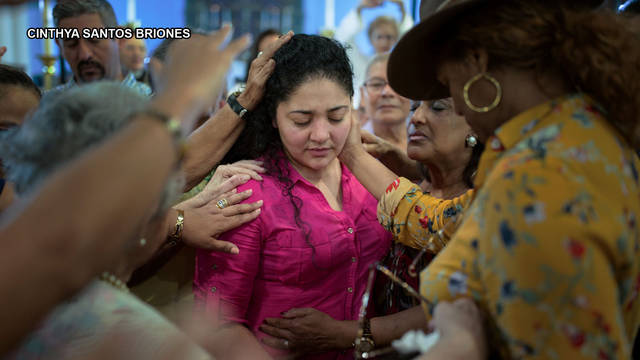 Democracy Now! producer Laura Gottesdiener recently co-wrote a piece with Malav Kanuga and Cinthya Santos Briones for The Nation about the story of one undocumented mother’s struggle to keep her family together:

On a brisk evening in early December, Amanda Morales’s oldest daughter is perched at the edge of a bunk bed inside a cavernous century-old Gothic Revival church in upper Manhattan. She is just 10 years old, round-faced and shy, and she is writing her life story.

“Once upon a time there was a girl named Dulce. She had a mom who was going to be deported,” the fifth-grader types haltingly in Script MT bold font. “Because of Mr. Trump,” she adds.

Dulce briefly sets aside the family’s laptop—donated only hours earlier—to retrieve a toy ball from her younger sister, Daniela, and return it to their teary-eyed baby brother, David, who had been squirming at Dulce’s side. The small room, which is technically the church’s library, is strewn with children’s clothes and toys.

“Get ready for your shower!” Dulce’s mother, Amanda, calls in Spanish. She’s sitting in the adjacent room with one of the church’s congregation members, Rosalba, chatting about the new bag of coffee their friend brought earlier. Amanda nearly always entertains visitors at this hour, mostly older Dominican women who stop by after work to keep her company during the long evenings.

Too absorbed in her story to hear her mother, Dulce keeps typing. “So on August 17,” she continues writing, “the mom was going to go to New York City to go to the court. But she didn’t go because she was going to get sent to Guatemala. So she decided to go to a church.”

Read more at The Nation