Louisiana Attorney General Jeff Landry has announced the state will not bring charges against two white police officers from Baton Rouge for the 2016 killing of Alton Sterling, an African-American father of five. Bystander video shows Sterling was pinned to the ground by the two police officers when they shot him. Alton Sterling’s killing sparked nationwide protests. It’s the latest case in which authorities have refused to bring charges against officers for killing civilians, despite video evidence of the killings and mass protests demanding accountability for the death. We speak to Chris Stewart, an attorney for Alton Sterling’s children.

AMY GOODMAN: I’m Amy Goodman. This is Democracy Now! Louisiana Attorney General Jeff Landry has announced the state will not bring charges against two white police officers from Baton Rouge for the 2016 killing of Alton Sterling, an African-American father of five. Bystander video shows Sterling was pinned to the ground by the two police officers when they shot him at point-blank range. A warning to our television audience, this video is graphic.

POLICE OFFICER: He’s got a gun! Gun! Hey bro, you [bleep] move, I swear to God. [gunshots] Get on the ground! [gunshots]

WITNESS: What was that for, man?

AMY GOODMAN: Alton Sterling’s killing sparked nationwide protests. It’s the latest case in which authorities have refused to bring charges against officers for killing civilians, despite video evidence of the killings and mass protests demanding accountability for the death. Quinyetta McMillon, mother of Alton Sterling’s eldest son Cameron, condemned the decision not to bring charges.

QUINYETTA McMILLON: I would not allow Cameron to be here today, for his reasons. And like his aunt said, we’re all out of tears. We have nothing else in us to cry about now, because, guess what, we all knew what it was, just like y’all knew what it was going to be. … Alton can’t tell his story, to you nor to me. He’s gone. There’s no more coming back. So there is not no amount of money on this Earth, on this—in this world, that can give those kids back their father. They took a human away. They took a father away. They took somebody away that did not deserve to be away. The way they killed him was in cold blood. You know it. I know it. But, yes, the system has failed us.

AMY GOODMAN: We go now to Atlanta, Georgia, to speak with Chris Stewart, an attorney for Alton Sterling’s children.

Chris Stewart, welcome to Democracy Now! Can you talk about the attorney general’s decision not to bring charges against the two white police officers?

CHRIS STEWART: Yes. Thanks for having me. We found out yesterday. We went to a private meeting with Attorney General Landry, and he informed us that he wasn’t going to bring charges. But there were a few interesting things that he said in that meeting. One thing that he told us was he didn’t take it to a grand jury because he wasn’t sure if he could win. And that was key to myself, because that told me that, well, you do think there’s a possibility that you could get a prosecution in this case. But it just takes courage to hold political office and be a prosecutor, and we didn’t get that in this case.

CHRIS STEWART: Yes. He didn’t take it to a grand jury at all.

AMY GOODMAN: And what is your response and the family’s response? And what are you demanding now?

CHRIS STEWART: You know, it wasn’t really very surprising for the family or myself. I handle a lot of these cases across the country, and it’s very rare where we get someone that’s bold enough and strong enough to move forward with prosecution in an officer-involved shooting. And when we do, the community finally may get justice, but a lot of times the people, due to political pressure and general public, they just fail to prosecute.

AMY GOODMAN: Can you talk about the significance of the two videotapes? I mean, we just watched this with our own eyes. There was one from the convenience store and another that was filmed right nearby.

CHRIS STEWART: Yeah, it’s a sad state of affairs that even with the videotapes nowadays, you rarely get justice. I represented Walter Scott in South Carolina, who was running from that officer and got shot in the back six times. And we had videotape in that, that was clear as day that there was no fight, the officer lied, that Walter didn’t take his Taser. And we still got a hung jury the first time and had to try him again.

AMY GOODMAN: What about the additional video that the police are going to release?

CHRIS STEWART: That’s going to be key. We believe that that may be released by Friday. Our understanding, the first time we met with the DOJ, when they decided to not prosecute, they told us that the video that nobody has seen is very disturbing. They said that officer Blane Salamoni immediately gets out of his vehicle, walks over to Mr. Sterling, pulls out his gun and puts it to his head, and uses profanity and threatens to kill him.

AMY GOODMAN: I want to turn back to a 2016 press conference, right after Alton was killed, with Quinyetta McMillon, again, the mother of Sterling’s son Cameron. At the beginning of the event, 15-year-old Cameron consoles his mother as she speaks. But after a few minutes, he breaks down in the arms of supporters standing behind the two of them.

QUINYETTA McMILLON: The individuals involved in his murder took away a man with children, who depended upon their daddy on a daily basis. My son is not the youngest. He is the oldest of his siblings. He is 15 years old. He had to watch this, as this was put all over the outlets, and everything that was possible to be shown.

AMY GOODMAN: That was Cameron, just weeping, two years ago. And you heard Quinyetta in the previous clip saying she couldn’t even bring him yesterday, when it was announced—

AMY GOODMAN: —that the charges hadn’t been brought. Is the police department holding hearings?

CHRIS STEWART: Yes. Thankfully, the chief is reviewing whether they’re going to keep their job with the Baton Rouge Police Department. And from the most recent news, it looks like that Blane Salamoni will be terminated. And we’ll see if that actually—

AMY GOODMAN: So, they have been on the job now?

AMY GOODMAN: Since his killing?

CHRIS STEWART: Yes. That was announced yesterday. His lawyers said that they believe he’s going to be terminated by week’s end.

AMY GOODMAN: And how do you respond to them saying there was evidence of drugs in Alton Sterling’s system?

CHRIS STEWART: You know, that’s the amazing thing about these cases, whenever it’s a person killed by a police officer, especially if they happen to be black. The first thing that they do, every time, if you notice, is they report negative information about the victim, information that has nothing to do with the shooting, but they will go back to crimes that they were arrested for years or decades ago. They will talk about them not having a job. They will say if they had trace amounts of marijuana or something in their system—anything to get all of you watching right now to hate the victim or to not like them or to not make a fuss about them. That’s the first thing that they do. They don’t report on the officer’s bad history of behavior or excessive force complaints. They report on the victim. And that is a strategy to get people to not care.

AMY GOODMAN: Are you suing the police department and the officers?

CHRIS STEWART: Yes. We filed suit already in this case, and we’re still battling in that situation. Now that this video is going to be released, that should be very helpful to our case. But, you know, in these situations, even if we do win in the end, no amount of money is going to bring Alton back. It won’t bring Cameron’s father back. You know, I talk to Cameron all the time, and he’s having a rough time dealing with this, as all his children are. And it just shouldn’t have happened, because these officers escalated the entire situation.

AMY GOODMAN: Chris Stewart, I want to thank you for being with us, attorney for Alton Sterling’s children.

That does it for our broadcast. Democracy Now! co-host Juan González will moderate a discussion tonight at Rutgers University with Intercept’s Jeremy Scahill and Shaun King at 6:15 at Rutgers University, College Avenue Academic Building, 15 Seminary Place, New Brunswick. 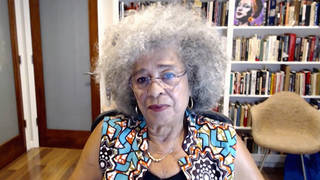