Internal documents obtained by The Guardian show how a network of right-wing think tanks have launched a nationwide effort to convince members of public sector unions to stop paying dues. The effort is backed by $80 million in funding from billionaires like the Koch brothers, who expect a favorable decision from the Supreme Court this month in a case that could let workers who benefit from union-negotiated contracts avoid paying union dues if they opt not to join the union. The campaign comes as North Carolina teachers staged a massive walkout today, shuttering hundreds of schools, on the heels of major strikes by teacher unions in West Virginia, Kentucky, Oklahoma and Arizona. For more, we speak with Ed Pilkington, chief reporter for The Guardian in the U.S. His new report is an exclusive look at “How rightwing groups wield secret 'toolkit' to plot against US unions.”

JUAN GONZÁLEZ: Well, we end today’s show looking at a new plan by a network of right-wing think tanks to convince members of public sector unions to stop paying dues. Internal documents obtained by The Guardian show the State Policy Network has launched a campaign to, quote, “cause public-sector unions to experience 5 to 20 percent declines in membership, costing hundreds of thousands or even millions of dollars in dues money.” The documents note, quote, “This can affect the resources and attention available for union leaders to devote to political action campaigns,” end of quote.

The effort is backed by $80 million in funding from billionaires like the Koch brothers, who expect a favorable decision from the Supreme Court this month in a case that could let workers who benefit from union-negotiated contracts avoid paying union dues if they opt not to join the union.

AMY GOODMAN: The campaign comes amidst major strikes by teachers’ unions in West Virginia, Kentucky, Oklahoma and Arizona. Today, a major walkout in North Carolina, less than a week after a handful of Democrats introduced the Workplace Democracy Act, that would repeal anti-union right-to-work laws, streamline union elections and crack down on employers who punish employees for organizing unions.

For more, we’re joined in our New York studio by Ed Pilkington, chief reporter for The Guardian in the U.S., his new report an exclusive look at how right-wing groups wielded a secret “toolkit” to plot against U.S. unions.

Welcome back to Democracy Now!, Ed. Lay it out for us.

ED PILKINGTON: Well, I think what we’re seeing is we’re seeing the trade union movement in America at a crossing point, a really crucial and vital moment. On the one hand, we’re seeing this surge of activity by unions, as you said, in the teachers’ strikes right across the country, the latest in North Carolina. On the other hand, they’re facing the most existential threat in a generation in the upcoming U.S. Supreme Court ruling, Janus, which could gut a lot of their membership, it could gut a lot of their incoming resource, and it could deplete their power as a major cornerstone of the left in America.

Now, at this time, at this crucial time, we have obtained a sort of stash of documents from a group called the State Policy Network. They’re extremely well funded, as you said, $80 million coming from places like the Koch brothers, the Walmart fortune and their family foundation, the Bradley Foundation from Wisconsin. These are all very well-resourced foundations, coming from billionaire backers, that are dedicated to introducing low taxes, small government, and to attacking the trade unions. And they fund the State Policy Network, which is a nationwide kind of—I kind of think of it as a spider’s web of what they call think tanks. I think of them more as sort of right-wing activist groups.

And they are planning and encouraging their members to carry out what they call an opt-out campaign. Now, that’s using Supreme Court rules—and it will be using the latest upcoming Supreme Court ruling, which is widely expected to go against the unions—to carry out direct mailing and electronic communication with trade union members. They will contact trade union members directly and encourage them to quit being members of trade unions and also to stop paying their fees and their dues.

JUAN GONZÁLEZ: And this, in some places, like in Washington and in Oregon, there’s already been efforts, door-to-door campaigns, to begin to get people to renounce their union memberships?

ED PILKINGTON: Yeah, in Oregon and Washington, one of the members of the State Policy Network, called the Freedom Foundation, which is—regards itself as a think tank—as I say, it’s more like a right-wing activist group—got hold of a list of trade union members in all the public sector unions and then went door to door, knocking on doors, saying, “Hi. We want you to know that you have the right to stop being a member of your union,” and encouraging people to actively quit and to stop paying them money. Now, this could have major consequences for the trade union movements and, in a knock-on effect, for the whole progressive movement in America, because millions of dollars of resources are at stake, and potentially hundreds of thousands of trade union members.

AMY GOODMAN: So, the strategy document that you obtained at The Guardian from the State Policy Network says, quote, “To get employees to opt-out of their union,” the documents say, “they first need to know they have a choice. A direct marketing campaign to union represented public employees that combines mail and digital outreach helps raise awareness and raise opt-out rates.” It continues, “Access to lists of union members is essential to this project. The most common means of obtaining lists is through requests made under state public records laws,” the documents say.

ED PILKINGTON: That’s right. That was one of the more chilling aspects of this move, I think. They’re encouraging their network of members to go out, use Freedom of Information laws, at state level, and, by doing that, to obtain the private information of trade union public sector members—notably, names, but also addresses, because, as I’ve said, what they want to do is direct mail or electronically communicate with those trade union members. And to do that, they need the private information.

So, we’re already starting to see that. As we’ve said, we’ve seen it in Oregon and Washington. There is evidence that other groups are trying to do it elsewhere in the country. Post-Janus, which is the upcoming ruling, which is coming in a matter of days, if it goes against the unions, I would expect to see that kind of activity, under Freedom of Information laws, escalate right across the country.

JUAN GONZÁLEZ: And, presumably, the reason they’re already starting and preparing to act immediately after the Janus decision is to be able to have an impact right away on union power in the upcoming November congressional elections, as well.

ED PILKINGTON: Right. I think what’s really important and interesting about the leaflet—the literature that we obtained is the terms in which they put it. They’re not talking about just giving trade union members “First Amendment rights,” which is the language they normally use. They’re talking about politics. They’re quite clear about this. They say, “If we can reduce the income coming in to trade unions, we will therefore be able to reduce the amount of political campaigning and political activity that they can do.” So it’s a direct assault on the progressive movement in America, ahead of November.

AMY GOODMAN: And then talk about the Supreme Court decision.

ED PILKINGTON: Right. Well, this is going to be one of the first major moves, decisions, in which Neil Gorsuch will be participating. It comes about because Antonin Scalia actually proposed this kind of legislation, but after he died, it went to a 4-4 kind of deadlock between the two sides of the court, and the previous case, called Friedrichs, actually collapsed as a result. So, now that Gorsuch is there, the right-wing networks, the Koch brother-backed groups, have reincited it. It’s gone back up to the court under a different plaintiff—it’s called Janus now. And it’s exactly the same case. And we’ll probably and almost certainly see Neil Gorsuch go with a 5-4 conservative majority on the court. And as a result, we’ll see a nationwide sweep against trade unions.

AMY GOODMAN: Well, when is that expected to be handed down?

ED PILKINGTON: It’s going to have to be by the end of June, so it could be a matter of any day now.

AMY GOODMAN: Ed Pilkington, chief reporter for The Guardian in the U.S., his new report an exclusive look at how right-wing groups wielded a secret “toolkit” to plot against U.S. unions. We’ll link to it at democracynow.org.

Democracy Now! is accepting applications for our paid video production fellowships, as well as a variety of paid internships. Find out more at democracynow.org.

I’ll be speaking at University of California, Santa Cruz, Thursday night, that’s May 17th, at 7:00 with Dan Ellsberg—you can check our website for details—at the Nine and Ten Multipurpose Room—at democracynow.org. 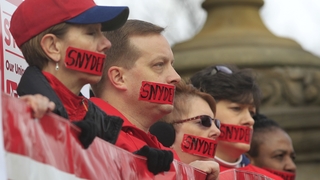