President Donald Trump said Friday that immigrants fleeing violence and seeking asylum in Europe are changing “the fabric of Europe. … And I don’t mean that in a positive way.” Trump’s xenophobic comments came during a shocking interview with the Rupert Murdoch-owned British tabloid The Sun. Massive protests have greeted President Trump during his two-day trip to Britain—including a 20-foot-long giant baby Trump blimp outside Parliament. We go to the streets of London to speak with Ash Sarkar, the anti-Trump coalition organizer who confronted Piers Morgan during a “Good Morning Britain” interview Thursday that went viral.

AMY GOODMAN: We begin our show in Britain, where President Trump is meeting with Prime Minister Theresa May today, just hours after warning that a “soft Brexit” will kill Britain’s chances of a future trade deal with the United States. In an explosive interview with the Rupert Murdoch-owned British tabloid The Sun—Murdoch is a Trump supporter—in which Trump claimed that Britain is “losing its culture” due to immigration, Trump said Theresa May had ignored his advice on Brexit negotiations.

PRESIDENT DONALD TRUMP: If they do a deal like that, it will most likely—because we’ll be dealing with the European Union instead of dealing with the U.K., so it will probably kill the deal with—if they do that, their trade deal with the U.S. is—will probably not be made. I did give Theresa, who I like—I did give her my views on what she should do and how she should negotiate. And she didn’t follow those views. I would—I would actually say she probably went the opposite way.

AMY GOODMAN: Trump went on to praise former Foreign Secretary Boris Johnson, calling him Britain’s future prime minister. Johnson resigned earlier this week in protest of Brexit negotiations, writing in his resignation letter the, quote, “Brexit dream was dying,” and “We are truly headed for the status of a colony.” Trump also took aim at London Mayor Sadiq Khan in the interview with The Sun.

AMY GOODMAN: Sadiq Khan is London’s first-ever Muslim mayor. He’s one of the most prominent Muslim politicians in Europe. Meanwhile, massive protests are greeting President Trump during his two-day trip to Britain, including a 20-foot-long giant baby Trump blimp outside Parliament. The balloon depicts the president as an angry orange baby wearing a diaper, clutching a cellphone, ready to tweet.

We’re going to go now to the streets of London to speak with Ash Sarkar, the anti-Trump coalition organizer who confronted Piers Morgan during a Good Morning Britain interview Thursday that went viral.

ASH SARKAR: I’ll be marching in Westminster tomorrow, alongside thousands of other people who found the policy of forced separations unconscionable—

ASH SARKAR: —who think that the sight of our elected prime minister holding Donald Trump’s hand is an utter embarrassment. And—

PIERS MORGAN: Where was—

PIERS MORGAN: Where was your protest march against that when he came to the country?

ASH SARKAR: And that’s why I also protested.

PIERS MORGAN: Ash, I’d go and check out some basic facts about your hero Obama. Eventually, how heroic he comes across.

ASH SARKAR: He’s not my hero. I’m a communist, you idiot!

AMY GOODMAN: “I’m a communist, you idiot,” said Ash Sarkar, who joins us now from Parliament Square, where the second day of protests against President Trump are underway.

Ash, welcome to Democracy Now! Why are you in the streets today?

ASH SARKAR: So, the reason why I’m in the streets today is because the values that Donald Trump represents, of racism, of misogyny, of spreading hatred and bigotry, are completely out of step with the British public. So, there was some polling done by YouGov, which found that 67 percent of the British public think that Donald Trump is a poor or terrible president, which is fairly damning, makes for fairly damning reading, as I’m sure you’d agree with me. And what’s more, I think that this is a tremendous opportunity for the British public to show that there is international outcry at Trump’s policy of border separations, of separating children from their parents.

And it’s also an opportunity for us, the British public, to apply pressure to our own government, because—I’m not sure if you’ve seen—we’ve been treated to the fairly embarrassing sight of Theresa May clutching onto Donald Trump’s hands and kind of capering off to him for, you know, the crumbs of an international trade agreement, while he, you know, from pillar to post, smears her premiership. I mean, it’s been a really embarrassing week to be British. We got kicked out the World Cup, and now this.

AMY GOODMAN: Talk about the Trump baby blimp that, until just a few minutes ago, was flying over Parliament. The mayor of London, who Trump attacked for his immigration policies—and Sadiq Khan has made clear they’re not his immigration policies, they’re Prime Minister May’s. He’s not responsible for immigration in Britain, although he says that immigration is what makes his country great. This baby blimp of Trump, which has clearly so enraged him that he is not coming to London, unlike previous presidents—I mean, there was massive protest against President Bush during the Iraq War. He still went to London. Trump is sidestepping London. This baby blimp, an orange baby in a diaper, of Trump holding a cellphone, the significance of this and what this means, reaching the president of the United States through mockery?

ASH SARKAR: I mean, the thing is, is that Britain has got a great tradition of irreverent political satire. And I think that this Trump baby blimp has simply been the latest in this long and rich tradition. And if Trump was truly on the side of free speech, truly on the side of anti-censorship campaigns, it wouldn’t bother him. He would say, “Well, look, I might not like this, but this is—you know, this is what you sign up for with a healthy and liberated democratic culture.” Instead, a baby blimp, which I think 20 feet might have been a bit of an exaggeration—it didn’t really blot out the sun, though it was fairly big. You know, a baby blimp balloon, which shouldn’t even register on a president’s list of priorities, especially when he’s here ostensibly to broker some kind of trade agreement, when he’s trying to think about what the future of NATO is, it shouldn’t even register. He shouldn’t even know about this kind of thing, let alone be taking it so to heart that he’s chased away from the capital city of the nation he’s come to visit.

In terms of what has been, I think, a bigger threat to him, I think it is the scale of these protests. So, back in January 2017, with only three days to organize it, we put together a 30,000-strong protest here in Westminster. I think that the protest today will dwarf even that, because there’s been that—there’s been a lot more preparation put into it. And I think that he will longer be able to comfort himself with the lie that he is well liked by the British people. He’s despised by the British people. And what we know about Donald Trump is that he’s got an incredibly fragile ego. It’s all bluster. It’s all bravado. And he’s got a tremendously thin skin. And I think were he to be confronted with the scale of that loathing, he would feel very intimidated indeed. And that’s why he’s running around the country, from Blenheim to Checkers, maybe going up to his golf course in Scotland, which will cost the British taxpayer an extra £5 million of policing costs, because, frankly, he’s scared of democratic participation.

However, Piers Morgan, who really does have the bearings of a particularly belligerent walrus, would not let me get a word in edgeways, and instead kept talking about Obama’s immigration policy, which was criticized widely by not just by myself, but many other leftists in the U.K., as well. And hopefully you’ll forgive me for losing my patience a bit and calling him an idiot, and also taking him to task for his own, you know, weak-sauce interviewing of Trump. He had an opportunity to hold him to account, and he didn’t.

AMY GOODMAN: Well, Trump was interviewed by The Sun. That’s the Rupert Murdoch-owned paper. Of course, Rupert Murdoch is a supporter of Trump. And this is what he had to say about what it’s happening to Britain and Europe.

AMY GOODMAN: “And I don’t mean that in a positive way,” said Trump, that immigration is changing “the fabric of Europe.” Ash, if you could respond?

Donald Trump has gravely misjudged the temperature of this country, because, yes, we have been dealing with an uptick in xenophobia and racism, particularly following the Brexit vote, but what we’ve also seen, in recent polling released this week, is that that has made progressives in this country a lot more vocal about articulating the facts that immigration benefits to the social and economic fabric of this country. So, if he doesn’t like immigration, if he doesn’t like foreign travel to this country, he is free to leave at any time he wants. We don’t want him here.

AMY GOODMAN: Ash Sarkar, I want to thank you for being with us, with the anti-Trump coalition, standing at the protest site. 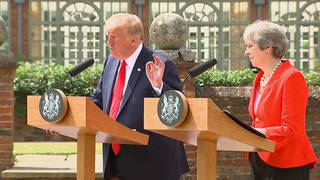