In New York City, the new owner of the New York Daily News says it will fire half the staff of the longtime newspaper. Among those who were fired was editor-in-chief Jim Rich, who tweeted, “If you hate democracy and think local governments should operate unchecked and in the dark, then today is a good day for you.” In the 1980s, the New York Daily News employed 400 journalists. After the latest firings, the newspaper will have only 45 people in its newsroom staff. The New York Daily News’s owner, Tronc, is also the publisher of the Chicago Tribune, The Baltimore Sun and the Hartford Courant. For more, we speak with Democracy Now!’s Juan González, a longtime columnist for the New York Daily News.

AMY GOODMAN: Juan, before we move on with our first story, this is kind of your alma mater. This is the place you worked for almost 30 years, the New York Daily News. Now the latest round of cuts, half the staff has been fired by the new owner, Tronc?

JUAN GONZÁLEZ: Yes, Amy. Unfortunately, I expected that this was going to happen once Tronc took over. Tronc, of course, is the old—successor to the old Tribune Company. And that was the company that, when I first got to the Daily News in 1987, was running the Daily News and provoked a strike of the 2,500 employees of the newspaper back then. And back then, I would say, in the late '80s, early 1990s, there were about 450 people in the newsroom. I think there were more in the ’50s, but by the late ’80s and beginning of the ’90s, we had about 450. So, to go now to 45—one-tenth of the staff—and you've got to think that New York City back then had maybe seven, seven-and-a-half million people. Today, New York City has eight-and-a-half million people. So you’re talking about a much bigger city, many fewer reporters. It’s just a tragedy, what’s happening to the newspaper business, and not the fact that papers are not publishing as many papers, because obviously they have websites, but that the staffs continue to shrink of the people who are actually producing original news. It’s ludicrous to think that you can put out a major news site covering New York City with just 45 people.

AMY GOODMAN: And as Jim Rich said, the fired—now-fired editor-in-chief, “If you hate democracy and think local governments should operate unchecked and in the dark, then today is a good day for you.” What does this mean for cities all over and towns across the country that are losing their media, their newspapers?

JUAN GONZÁLEZ: Well, that’s the big question in the media today, is: How do you provide local news? Because there will always be national outlets and networks and cable systems to produce the national news, but who’s going to cover your local school board, your local city council, the decisions that affect your zoning and changes in your city or your town, if fewer and fewer reporters every day are doing that?

AMY GOODMAN: And, of course, we will continue to cover these issues all over the country.

Who Is Maria Butina? The Story of Accused Russian Spy Who Infiltrated the NRA Before ’16 Election

NEXTWho Is Maria Butina? The Story of Accused Russian Spy Who Infiltrated the NRA Before ’16 Election 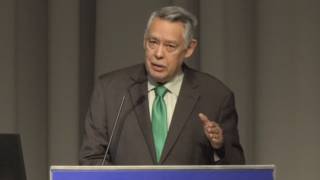