While climate change denier Scott Pruitt has been ousted as administrator of the Environmental Protection Agency over a slew of corruption scandals and his close ties to industry lobbyists, the Trump administration’s war on the environment and environmental regulations continues unabated. For more on the government’s attacks on public land protections and key regulations like California’s fuel emissions standards, we speak with Kierán Suckling, executive director and a founder of the Center for Biological Diversity.

KIERÁN SUCKLING: Yeah, this is really outrageous, because the way our Clean Air Act works is it allows states to set standards if they’re higher than the federal government. And so, for 48 years running now, California has had a higher standard. It’s had that through administrations Democratic and Republican, conservative and liberal. No one’s had a problem with it, until Trump. And so, partly, this is his effect—efforts to reduce any attempt to control global warming, but it’s also clearly a personal agenda to attack California, which he believes is just generally a hostile element to him personally, and so, consequently, we have this incredibly irrational act, especially when, for example, you’ve got Barrasso talking about state’s rights: “Let’s empower the states.” Well, these Republicans only want to empower the states when the states have a lower protective standard. The second a state has a higher standard, all of a sudden all concerns about state rights go out the window, and we have to go to a federal single authority that’s going to reduce environmental protection.

AMY GOODMAN: Kierán, what about the record of the interior secretary, Ryan Zinke? You have ThinkProgress saying documents released by the Department of Interior, then retracted a day later, revealed the agency officials dismissed evidence that public lands provide numerous benefits in favor of prioritizing fossil fuel interests, along with ranching and logging, and then CNN reporting Zinke is meeting with people that are not on the public record. For example, met with Congressman Chris Collins, a New York Republican, who was the first in Congress to endorse Trump’s presidential candidacy. That was according to the official calendar. But Zinke’s calendar didn’t show who else was in the room: three representatives of a company that do business with the National Park Service—one of about of a dozen instances uncovered by CNN of Zinke’s calendar omitting who he’s actually meeting with.

KIERÁN SUCKLING: Yeah. Zinke, I think, is going to go down as one of the worst interior secretaries in history. And his actions are very, very similar to what Scott Pruitt was doing over at EPA before he was forced to resign. And that is that he’s aggressively trying to avoid all environmental laws. He’s meeting with industry groups constantly and then hiding that, rather than simply admitting to what he’s doing in public. And the agenda is always the same: You know, what can he do to allow public lands to be destroyed? What can he do to allow more oil and gas drilling, even if it’s polluting local communities, poisoning children? It’s really a disaster.

He has turned this agency, which is supposed to be in charge of America’s land, air, water and species, into a handout program for industry, and then going so far as to just erase all this from his calendar, from his meeting notes, to take decisions from lower officials who are trying to do their job, and erase all references to issues which harms their agenda. And in particular what you’ll see is that protecting public lands, especially on national monuments, is really good for local economies, but instead they’ll erase all that information and say, “Oh, this is hurting local economies.” And it’s not just immoral, it’s illegal. And it’s the reason why this agency gets sued so much.

JUAN GONZÁLEZ: And staying on the Interior Department and Zinke, the department has also commissioned an expedited environmental review of the impact of leasing part of the Arctic National Wildlife Refuge. Now, this is a decades-long battle that the industry, the oil and gas industry, has not been able to win. What is happening here? And what could be the potential impact of this new expedited review?

KIERÁN SUCKLING: Yeah, this is very concerning. The Arctic National Wildlife Refuge, off the coast of Alaska, has been sought after by the oil industry for many, many decades now and has always been stopped, because it’s such a crown jewel of environmental protection, and there are so many other areas available for drilling. So, Zinke now has expedited efforts to review proposed drilling up there, brought on millions of dollars of new money, which apparently don’t exist to do anything else in government, more staff, and he wants to push through, at a very rapid clip, a decision to open this up to more drilling. And he’s throwing all the environmental standards, review processes out the window. And I think it’s partly because he knows time is limited up there for him, and he wants this to become his legacy, the guy who opened up America’s biggest, most important wildlife refuge to oil drilling.

AMY GOODMAN: Kierán Suckling, we are speaking to you in Portland, Oregon. In Yosemite right now, the national park, thousands of people are being evacuated because of terrible wildfires. I want to ask you about something else that happened in Oregon. Earlier this month, Donald Trump pardoned Dwight Hammond and his son Steven Hammond, two Oregon cattle ranchers who were convicted in 2012 of committing arson on federal lands. Prosecutors say the Hammonds set the fires to cover up their illegal deer poaching. Their conviction sparked armed right-wing militiamen, led by Ammon Bundy, to take over the Malheur National Wildlife Refuge in Oregon, provoking a 41-day armed standoff in 2016. Can you comment on this and what message President Trump was sending with this, these pardons?

KIERÁN SUCKLING: This is very disturbing, because the Hammonds not only were arsonists who set fire to our public lands, threatening firefighters who were out there, but have a long history of threatening to kill federal officials. And when the Bundy militia group came up to support them when they were prosecuted, they came up there with the message of not just let’s help the Hammonds, but let’s give all of America’s public lands away to industry and state groups.

And so, when Trump is pardoning these people, he’s really signaling—sending a signal to this right-wing base to say, “Hey, anti-government extremism, threats of violence against those you don’t like, against the government, are acceptable.” They’re encouraged. And, in fact, earlier, when he pardoned Joe Arpaio, another very controversial action, well, it turns out Joe Arpaio, Sheriff Joe, was also a supporter of this Bundy group and this radical, violent agenda. And I think it goes along with Trump gearing up this violent undercurrent in America to support him and to drive fear into others.

JUAN GONZÁLEZ: Last week, Supreme Court nominee Brett Kavanaugh submitted to the Senate his responses to a lengthy questionnaire as part of the confirmation process. Responding to a question about the 10 most significant cases over which he sat, Kavanaugh cited his dissenting opinion in White Stallion Energy Center v. EPA, in which he argued that the EPA must consider financial costs when deciding whether to regulate emissions from power plants. Kavanaugh wrote in the questionnaire, quote, “In my view, it was unreasonable—and therefore unlawful under the Administrative Procedure Act—for EPA not to consider the costs imposed by regulations in determining whether such regulations were 'appropriate and necessary.'” I’m wondering your thoughts on, if Judge Kavanaugh is confirmed for the Supreme Court, what the impact of this would be on environmental laws in the future.

KIERÁN SUCKLING: Well, it would be extraordinary. I mean, Trump has already had one appointee on the Supreme Court. If he gets the second, he will likely be able to control the whole judicial agenda for environmental protection in this country. And that’s incredibly important, because right now the strongest, most powerful force of resistance against Trump is our legal system. And that’s because virtually everything he wants to do is illegal. The people he’s put in place, like Zinke and Pruitt, to carry out his agenda have such disdain for governance. They don’t even know how to do governmental process properly, so they’re continually sued, they’re continually found guilty. And that’s keeping America on track, this independent judiciary. So, if Trump captures the Supreme Court, we’re going to find he’s got an open agenda to do whatever he wants. And so, it’s very, very dangerous and disheartening.

AMY GOODMAN: We just have a few seconds, but, Kierán Suckling, your organization, the Center for Biological Diversity, has sued the Trump administration 81 times in this last year and a half? Have you had any success?

AMY GOODMAN: Well, Kierán Suckling, we thank you so much for being with us, from Portland, Oregon, executive director and founder of the Center for Biological Diversity.

This is Democracy Now! When we come back—

KIERÁN SUCKLING: Thanks for having me on.

AMY GOODMAN: Thank you. When we come back, as records are broken, heat records around the country and around the world, we’ll look at a new medical study that indicates suicide will go up by tens of thousands as a result of climate change. Stay with us. 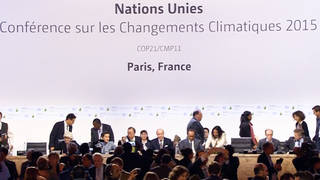