Ron Dellums (1935-2018): Organizing for Peace Forces Us to Challenge All Forms of Injustice

Ron Dellums, the legendary politician and antiwar activist who fought against U.S. intervention around the globe, apartheid in South Africa and the Vietnam War, has died at the age of 82. During his nearly three decades in Congress, Dellums opposed every major U.S. military intervention except a bill in 1992 to send troops to Somalia. This legacy began when Dellums pushed for the House to conduct a probe into U.S. war crimes committed in Vietnam shortly after taking office in 1970. When this effort failed, Dellums held his own ad hoc war crimes hearings. The celebrated congressmember once said, “I am not going to back away from being called a radical. If being an advocate of peace, justice, and humanity toward all human beings is radical, then I’m glad to be called a radical.” We remember Ron Dellums’s legacy by airing his 2015 speech at the “Vietnam: The Power of Protest” conference in Washington, D.C., where he was introduced by Democracy Now! co-host Juan González.

AMY GOODMAN: This is Democracy Now!. I’m Amy Goodman, with Juan González, as we remember the pioneering antiwar Congressmember Ron Dellums, also the former mayor of Oakland, went on to teach at Howard University. He died on Monday at the age of 82 of cancer at his home in Washington, D.C. We turn back to 2015 at a conference he attended in Washington, “Vietnam: The Power of Protest.” He was introduced by Democracy Now!’s Juan González.

JUAN GONZÁLEZ: Ron Dellums is a legend in this country in the progressive movement. I just want to remind you of one thing you may have forgotten. One of his first acts when he was sworn in as a U.S. representative was to take a small annex room to his office in the House of—in his office in the House of Representatives and mount an exhibition of the atrocities committed by the United States in Vietnam, as a freshman congressman. And he has continued to stand for social justice, labor rights, environmental rights. He is a true champion of our movement. Ron Dellums.

RON DELLUMS: Sisters and brothers, I come from the Bay Area—Oakland, Berkeley. Unlike many other places in the country, virtually every movement of the '60s emerged in close proximity and great simultaneity. So, unlike many other places, we were forced to sense each other's anger, to feel each other’s rage, to listen to each other’s analysis, to feel each other’s passion, to listen to each other’s music. And I maintain that out of that incredible cauldron of activism, a unique group of people emerged. So we heard—we had to hear each other—the civil rights movement, the nationalist movement, the Brown Berets, the Black Panthers, the Gray Panthers—all of the various movements. I remember in 1966 a young guy by the name of Bob Scheer, a journalist, who ran against the person that I ultimately defeated four years later. I remember we used to come back from meetings where we would hear this young guy lay out an extraordinary analysis of why we should oppose the Vietnam War. We used to come back and say, “Man, that’s a bad dude!” White guy, too, you know, wow!

But in 1967, something magical happened. This brilliant, prophetic, articulate, eloquent minister mounted the podium, 1967, Riverside Church in New York, and laid out his reason for opposing the Vietnam War. It was courageous and historic. He laid out his moral opposition. He saw it as unjust, illegal and immoral. When he stepped away from the pulpit, he was attacked by people in the civil rights movement by saying, “Martin, stay in your lane, brother. You’re a civil rights activist. Don’t water down the movement. You’re going to invite new enemies. You’re going to detract from what we’re doing. Stay in your lane.” Whites attacked him essentially the same way, by saying, “Reverend Martin Luther King, stay in your lane. You’re a civil rights leader. What do you know about foreign policy and national security and war and peace? Stay in your lane.”

So Martin Luther King begins to criss-cross the country to answer his critics. He comes to Berkeley, California, Sproul Hall steps, University of California at Berkeley, crowded literally with thousands of people. A young black guy, Ron Dellums, standing way in the back of the several thousand people, hanging on every word, didn’t realize at that moment that my life would be changed forever.

And I would comment on four points that he made in that speech and speeches going forward challenging the war in Vietnam. First, he said, “Why did I stand up?” His response was, “I cannot segregate my moral concerns.” That said to me that we must challenge all forms of injustice, because Martin Luther King said we cannot segregate our moral concerns.

Secondly, he said there are two kinds of leaders, one who waits until the consensus is formed and then run swiftly to the front of the group and declare leadership, but then he said there’s a second kind of leader, who has the audacity and the courage to risk attempting to shape a new consensus. I interpreted that to mean we had carried the burden of racial, cultural and economic oppression, but we did not have to carry the burden of ignorance, that we had the obligation, the right and the responsibility to enter the arena and be educative, to educate our people, to help them to understand the interrelatedness, the interconnectedness, the relationships between and among all issues of oppression and injustice.

One of his lessons of education was a statement that was so vivid, so powerful: “We are dropping bombs in North Vietnam that are exploding in the ghettos and the barrios of America.” How incredibly poetic! How incredibly powerful, the vision! He was saying to people, understand the relationship between the billions of dollars that are being spent to wage war and the inability to address the injustice that is taking place in the ghettos and the barrios of America, the issue of priorities. Very powerful.

But, to me, the most powerful statement, that shaped my life forever, was this comment: “Peace is more than simply the absence of war; it is the presence of justice.” I interpreted that to mean, wow, the peace movement is the ultimate movement. Peace is the superior idea, that the umbrella movement for—of all movements, the peace movement, because to come together under the banner of peace forces us to challenge all forms of injustice.

I want you to consider this point. I don’t make it in criticism; I make it simply as a matter that we must reflect upon, because I have come to this moment many times. Suppose everyone—because I believe that the movement to end the war in Vietnam ultimately became the largest and most powerful movement in the country. But when the war in Vietnam ended, many of the people went home and left us to fight racism, poverty, hunger, disease, homelessness, helplessness—went home. And my great lament in my life has been: What would have happened in this country and in this world if people had heard Martin Luther King and said, “Now that we’ve ended the war in Vietnam, let’s get on with dealing with other forms of injustice”? What would the world look like?

Pat Schroeder will recall, I tried to, on the floor of Congress, to tweak that comment just a little so my colleagues could understand it. I didn’t mean it quite that way; I’m sorry about that. Peace is more than simply the absence of war; it is the absence of conditions that give rise to war. OK? So that if we stayed together, what would the international community look like? What would the world look like globally? What would America look like? Would we still be seeing the Baltimores, if we had challenged on these issues? But it’s not too late.

In my final remarks—I have one minute; I may go slightly a few seconds over—but young people have asked me, “What is the difference between your generation, when you were our age, and our generation?” I won’t give you my total answer, because I think it’s a good question. But I’ll deal with two. Martin Luther King told us to raise our voices in the name of peace and justice and equality and peace, because it was the right thing, the moral thing, the ethical thing, the principled thing to do. This generation must do it because it’s now the only thing to do. It has now become the imperative. So what was principle for our generation now is the imperative for this generation, because we know that the price of war is too high. We know that the price of neglect of the issues that affect the human condition, we do it at our peril, so that we have a responsibility now to address the imperative.

A second difference is, Martin Luther King never told us we couldn’t do it. He said go out and change the world. Remember, he said, “I may not be with you at the end, but I have reached the mountaintop, and I can tell you this: We will achieve.” So we felt that we could change the world, and we went out to change the world. But this generation is being told 24 hours a day the system is broken, you can’t fix it; the system is bought and paid for, you can’t get it back. So how can people move to change the world when they are constantly being fed a diet of cynicism, of superficial political analysis rooted solely in partisan politics or the shaping of personalities as if this individual or that individual can change the world all by themselves, without dealing with the substance of the problems of policies that have to be addressed, but we narrow it down to very parochial, shallow analysis?

So what we have to say to this generation of young people, out of a sense of urgency, out of a sense of the imperative: You now must emerge. I’ve been doing some lecturing at Howard University with young people, and I’ll tell you what I found out—last point—is not that this generation does not get it; it’s that they don’t always hear it. But when they do hear it, they get it, because they listen carefully. And if I had to bet my last dollar, I would bet it on this generation of young people, because they’re not carrying the same baggage we carry, and if they ever stand up, they will change America and change the world for their children and their children’s children.

AMY GOODMAN: Former California congressmember, chair of the House Armed Services Committee, former Oakland mayor, Ron Dellums, speaking in 2015. He died on Monday of cancer at the age of 82.

And that does it for our show. Happy birthday, Jahmaiah Lewis! And happy graduation to our news fellow, Libby Rainey! 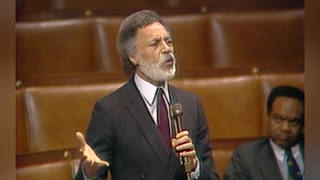