Just two days after protesters tore down the “Silent Sam” Confederate statue at the state’s flagship school, the University of North Carolina, Chapel Hill, the state’s Historical Commission voted 9 to 2 to keep Confederate monuments on the grounds of the state Capitol. We speak with the African-American woman who dissented in the vote to keep the three Confederate monuments in place at the state Capitol. She also voted against adding historical context to the monuments. Valerie Johnson is one of only two black members of the North Carolina Historical Commission and the only black woman. She is a professor of women’s studies and the director of Africana Women’s Studies at Greensboro’s Bennett College. She is also the chair of the North Carolina African American Heritage Commission.

NERMEEN SHAIKH: We turn now to North Carolina, where just two days after protesters tore down the so-called Silent Sam confederate statue at the state’s flagship school, the University of North Carolina, Chapel Hill, the state’s Historical Commission voted 9 to 2 to not remove Confederate monuments from the grounds of the state Capitol. Instead, the Historical Commission voted Wednesday to add context to the memorials with signs about, quote, “the consequences of slavery” and the, quote, “subsequent oppressive subjugation of African American people.” The decision came in response to Democratic Governor Roy Cooper’s request last year to move the monuments to a battlefield.

AMY GOODMAN: Well, for more, we go to Durham, North Carolina, where we’re joined by one of two dissenters in the vote to keep the three Confederate monuments in place on the state Capitol. She was also the only dissenting vote against adding historical context to the monuments that would remain. That was a 10-to-1 vote. Valerie Johnson is one of only two African-American members of the 17-member North Carolina Historical Commission and the only African-American woman. She’s a professor of women’s studies and director of Africana Women’s Studies at Greensboro’s Bennett College and chair of the North Carolina African American Heritage Commission.

Thanks so much for joining us, Professor Johnson. Can you talk about this vote? I mean, two days after the students toppled Silent Sam, which is a monument not to one person but to the Confederate soldiers who were students at UNC—they brought it down, threw dirt on its face—the commission convenes and votes to keep the three Confederate monuments on the grounds of the Capitol. Talk about this decision that you dissented from.

VALERIE JOHNSON: Well, thank you, first of all, for allowing me to have this opportunity to speak with you all.

Yesterday was the culmination of really months of deliberation by a study committee. The study committee consisted of five of us on the Historical Commission. And we were charged with coming to a decision to recommend to the full Historical Commission what to do about the Confederate monuments and the ask by Governor Roy Cooper to bring—to suggest that they be removed and put into the battlefield. As I was deliberating and as we were talking about this, there were all kinds of other actions and activities that were happening in the state of North Carolina having to do with the monuments. We had hearings. We heard from some parts of the public. But the decisions really came down to whether or not we had standing to be able to advise that these monuments be removed.

I call them memorials, because, in fact, they really are memorials that I believe are better served being in a cemetery. And I say that because of the way that they were erected. You know, these are huge footprints on our state Capitol grounds. One of the monuments is 75—a memorial, is 75 feet in height. That is a huge statement to make about the Confederacy.

And so, we had several ideas about what should be done. And the vote yesterday reflected three resolutions, three ways in which we were addressing the issue. I voted consistent with the statement that I made, which is to remove those three memorials and to place them in more appropriate venues.

NERMEEN SHAIKH: What about, Professor Johnson, the vote to—there were three resolutions, you say. And one of them, the possibility was giving a description, providing context to these memorials, as you say, not statues. Can you explain your vote on that decision, on that issue?

VALERIE JOHNSON: Yes, yes. Well, by voting to say no, that they should—that they should be removed, and my consistency in my vote was that not only are they—is it hard to rehabilitate those statues and to put the kind of signage around that should be there, that I also felt that I had to be consistent, again, with what I was voting and to say no to that particular resolution. It doesn’t mean that I’m against bringing to the Capitol grounds statues or monuments that depict the ways in which African Americans and Native Americans have contributed to North Carolina.

So my vote wasn’t against that. It was keeping consistent with the idea that those three statues should not be on the state Capitol grounds, the Capitol grounds that are for all of North Carolinians. I thought if this—if we voted to remove them, it would be an opportunity for us to rethink citizenship, because those monuments also were about abrogating the citizenship of African Americans and, by extension, other nonwhites. So, this isn’t just about black and white. This is about how is it we’re going to understand ourselves as full citizens of our state and of this country.

AMY GOODMAN: I mean, this is all so significant. We were recently in Bonn, Germany, and there wasn’t any discussion there of the fact that in Germany you don’t see monuments to Hitler. And then people say, “That’s because we can’t remember even the evil that he did.” They say, “No, they don’t belong as memorials.” In the United States, you have one flashpoint after another. Two days ago, you have the students taking down Silent Sam. Last year, the flashpoint for Charlottesville was the white supremacists wanting to keep up a Confederate statue of Robert E. Lee. Even his great-grandsons said, “No, he should be taken down.” But this issue of these monuments, and your view of what happened, and whether this ends the discussion, the commission overwhelmingly, above your objection, voting to keep these monuments, yet just down the road, at University of North Carolina, they toppled Silent Sam.

VALERIE JOHNSON: No, this is correct. This is not settled business. Even though we made the vote that we did yesterday and the commission has rendered its decision, and as a member of that committee and of the commission, even though I was dissenting, I do have to continue to be a part of an active committee, an active commission. And so, I am still going to voice my viewpoint and my understanding of what our history is in the state. But to think that this issue is settled is to be mistaken. We even had an incident in Salisbury, where white paint was thrown on a Confederate monument. Because we’re also in a time, as your earlier segment indicated, where there is a lot of life in turmoil, and we are not settled as a people. We are being led in directions that, to me, lead us toward fascism. And that is another reason that I stood the way that I did, that, as paraphrasing Dr. Martin Luther King Jr. in Why We Can’t Wait, unjust laws require action. They require us to address what is the injustice and immorality of laws. Just because something is technically legal doesn’t mean that it’s not immoral, and that we don’t—that are embound, those of us of conscience, to stand against it.

NERMEEN SHAIKH: Well, Professor Johnson, you’re only the second black woman ever to serve on the Historical Commission in its history, and that’s about 100 years, a century. So, can you comment, very quickly, on what kind of response you’ve received from the broader community about your dissenting vote? Because, of course, as we heard, the statue was taken down. So, it seems as though there are many people who support your dissenting votes. But can you tell us what you’ve heard so far, following the votes?

VALERIE JOHNSON: Absolutely. From the emails that I have received so far and telephone calls, people have supported my decision and have understood that I was standing for them, that I was speaking for them, when I stood and said no. I have received other emails that said to me that “You’re on the right path,” and that I am showing them how to be courageous. And one young woman was very appreciative. She said that it will make her work easier, because it gives her the courage to be able to voice her opinion.

So, it’s more than, again, just saying no to some statuaries. It is about being representative of how we show up as black women in this particular time.

AMY GOODMAN: And I wanted to bring—

VALERIE JOHNSON: Anna Julia Cooper, who is a native—who was a native of North Carolina, born in Raleigh, she was an African-American woman who was one of four—the first four to receive a Ph.D. And she wrote, in 1892, that we have to stand for something. And she also said that when and where black women enter, the whole race enters with them. So, I was representing that sentiment, that weight of—it’s not just the voice of professor Valerie Ann Johnson, but it’s of a people and a community who feel that they have not been heard.

AMY GOODMAN: Well, Professor Johnson, we want to thank you so much for being with us. Valerie Johnson is one of only two black members of the 17-member North Carolina Historical Commission, which oversees the removal or altering of historical monuments on state property, the only black woman on the commission, the second in its long, century-old history, the Mott distinguished professor of women’s studies and director of Africana Women’s Studies at Greensboro’s Bennett College and chair of the North Carolina African American Heritage Commission.

This is Democracy Now! When we come back, a white supremacist speechwriter just fired from Trump’s staff? We’ll speak with the head of the Southern Poverty [Law Center]. Stay with us. 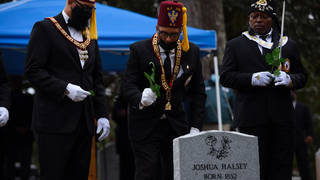