Two women being transported by sheriff’s deputies to a mental health facility drowned Tuesday in South Carolina when the van they were riding in was overcome by floodwaters. The two sheriff’s deputies in the vehicle survived. Forty-five-year-old Windy Newton and 43-year-old Nicolette Green are two of at least 37 people killed by Hurricane Florence since the storm made landfall. Both women had gone to hospitals Tuesday morning when they were involuntarily committed and detained. Less than 24 hours later, they were dead. “There are a lot of questions remaining about why this had to occur then, why there couldn’t have been some sort of an emergency delay,” says Meg Kinnard, South Carolina correspondent for the Associated Press, who has been following the story closely.

NERMEEN SHAIKH: We go now to South Carolina, where two women who were being transported by sheriff’s deputies to a mental health facility drowned Tuesday when the van they were riding in was overcome by floodwaters. The two sheriff’s deputies in the vehicle survived. Forty-five-year-old Windy Newton and 43-year-old Nicolette Green are two of at least 37 people killed by Hurricane Florence since the storm made landfall. Both women had gone to hospitals Tuesday morning when they were involuntarily committed and detained. Less than 24 hours later, they were dead.

News reports originally called the women “detainees” and said they had been shackled to the back of the van when they drowned in the rising waters in Marion County, South Carolina, near the Little Pee Dee River. Authorities are now saying they were mental health patients and the women were not handcuffed.

AMY GOODMAN: Family members are demanding to know why the two women were transported through dangerous floodwaters and how exactly they died. Windy Newton’s daughter Allison told The New York Times, “Why the hell would they leave a safe, dry area to go to God knows what? … Something feels wrong about this.”

This is Horry County Sheriff Phillip Thompson speaking Wednesday night. He was asked by a reporter if the deputies driving the transport van had driven around barriers on the flooded road, ignoring the warnings.

SHERIFF PHILLIP THOMPSON: We have three different people doing the investigations. Obviously, it appears that they did. My question is—I want to know why. What were the circumstances, and what happened at that particular time?

AMY GOODMAN: Well, for more, we go to Columbia, South Carolina, where we’re joined by Meg Kinnard, a reporter with Associated Press who’s been following this story closely, her latest article headlined “2 [patients] drown as van swept into floodwaters.”

Welcome to Democracy Now! It’s great to have you with us, Meg. Please explain what you understand at this point took place.

MEG KINNARD: Good morning. Yes, we understand that these women were being transported by Horry County sheriff’s deputies through the Pee Dee area of South Carolina, where there is a lot of flooding happening right now, and it’s going to continue for several days. They were being sent to medical facilities in a different area. They went through an area of Marion County, that is, as you noted, next to the Little Pee Dee River, one of the bodies of water that has been quickly rising as the water continues to flood into this state from North Carolina. Their van was swept away in rushing, rising water. The deputies were able to get out. Sheriff Thompson says they tried to get the women out, but for some reason weren’t able to get into the back of the van. They called for help. And as you noted, their bodies were pulled out of the water yesterday.

NERMEEN SHAIKH: And, Meg, can you talk about the time that lapsed between the incident and the recovery of their bodies, and why you know—why you think it took so long?

MEG KINNARD: The first radio call for this came in around 6 p.m. on Tuesday night. It wasn’t until yesterday afternoon, so if not 24 hours, very close to 24 hours later, that the women’s bodies were finally recovered. When the rescue crews got to them in the first place on Tuesday evening, it was beginning to get dark. The conditions were very dangerous. The sheriff and the coroner and other officials on the scene have talked about how quickly, just in between the call coming in and the rescue crews getting there, how much the water had already gone up. So a determination was made not to continue those efforts and to resume them at daybreak.

The sheriff noted yesterday that he’s not exactly sure why the deputies couldn’t get the door open. Maybe it was a water pressure issue. Maybe it was because of the positioning of the van underneath the water. But a specialized crew was flown in from Charleston to help with the recovery effort, and state police tell us that it was successful at some point very late yesterday afternoon.

AMY GOODMAN: So, Meg, talk about this issue of whether or not they were shackled, one of the daughters saying when the police came to take her mother, that they had handcuffs. This is Thom Berry with the South Carolina Law Enforcement Division speaking about the deaths.

THOM BERRY: The two individuals were recovered from the van. And we have heard that there were stories going around that they may have been encased in shackles or handcuffs. That was not true. They were not shackled. They were not handcuffed. Unfortunately, they are deceased. But at least now we can tell their families that their bodies have been recovered and will be returned to their loved ones. … Now we get into the difficult part, which is the investigation of the event itself. We have a lot of evidence to go through. We have a lot of information to look at. We have a lot of people to talk to. And that’s going to take time.

AMY GOODMAN: So that’s Thom Berry with the South Carolina Law Enforcement Division. A local TV station did report that they were shackled. So, Meg, can you talk about what you understand at this point, and if you believe what the authorities are saying?

MEG KINNARD: We did see those very early reports about this incident that started circulating right after it happened, that, first off, these women were referred to initially in reports as inmates, and, secondly, that they were shackled or somehow else restrained in the back of that van. Obviously, we have learned now that they were patients, not inmates.

And the sheriff told us yesterday that it’s his understanding that when patients are transported by deputies around the state, they will sometimes be restrained, but in situations where the patient is becoming manic or is believed to be a harm to himself or to others. Sheriff Thompson said yesterday he did not believe that that was the case with these individuals. But remember, he was speaking to us about this before their bodies were recovered. Thom Berry made those statements after the recovery occurred, and noted that there were no handcuffs or shackles.

NERMEEN SHAIKH: And, Meg, what do we know about—what has happened to the two sheriff’s deputies who were responsible?

MEG KINNARD: The deputies have been placed on administrative leave. That is typical in South Carolina when the state Law Enforcement Division is conducting an investigation into something involving a law enforcement agency here in the state. So they are still considered employed. They are still deputies with the Horry County Sheriff’s Office. There is also an internal investigation occurring in their own department, as well as the state Law Enforcement Division, and the Highway Patrol is also looking into the incident. So, until that internal investigation is completed, they will remain on administrative leave, and then the outcomes of the other investigations will perhaps determine their ultimate fate.

AMY GOODMAN: I mean, obviously, the horror of all this, these women being taken through—it was clear that this area was in danger of being flooded. And the fact that they were really being held in the back of the van, it was a very dangerous situation, which is why their family members are so deeply upset right now, aside from losing their loved ones. But if you could say, what is the policy of the department when it comes to—even if it is a prisoner—transporting a prisoner in these dangerous times, not to mention whether prisons are evacuated during, well, the situation like Hurricane Florence?

MEG KINNARD: Sheriff Thompson noted yesterday that he was complying with a court order to transport these women. He said that when those orders are issued, it is his job to ensure that the patient gets from point A to point B. There are a lot of questions remaining about why this had to occur then, why there couldn’t have been some sort of an emergency delay, and also why the deputies took the route that they took.

The highway where this occurred, Highway 76, is very near the Little Pee Dee River, as we have discussed, which is quickly rising and is an area of major flooding concern as these waters continue to go up around South Carolina. So that will be part of the state Law Enforcement Division’s investigation, as well as the Highway Patrol probe into why they were on that road at that time.

Sheriff Thompson also noted yesterday that he did believe that the deputies had driven around a barricade, which would have been blocking off this road, noting that it wasn’t safe to travel on. So, again, as these investigations go on, we will learn more about why those decisions were made the way that they were on Tuesday night.

AMY GOODMAN: Meg Kinnard, we want to thank you for being with us, South Carolina correspondent for the Associated Press. We’ll link to your piece, “2 [patients] drown as van swept into floodwaters.”

South Carolina Prisoners Were Left in Cells as Florence Descended. Why Weren’t They Evacuated?

NEXTSouth Carolina Prisoners Were Left in Cells as Florence Descended. Why Weren’t They Evacuated? 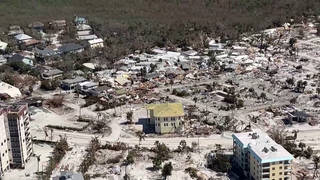