Dozens of protesters were arrested Thursday morning after shutting down an intersection in the heart of Times Square as part of a climate action organized by Extinction Rebellion. Members of the group parked an 18-foot boat in the intersection as dozens of protesters rushed in to sit around the boat, while others superglued and handcuffed themselves to the boat. The boat was intended to represent the climate refugee crisis, and protesters carried flags of some of the countries most vulnerable to rising sea levels and climate disasters. According to an Extinction Rebellion spokesperson, this action had been in the works for months, and it is part of a coordinated series of global mobilizations taking place October 7 to 11. Extinction Rebellion also rallied earlier in the morning outside of the Fox News headquarters — but it was merely a diversion in order to execute the larger demonstration in Times Square. Earlier this week, nearly 90 activists were arrested after staging a die-in on Wall Street, pouring fake blood on the iconic bull statue by the New York Stock Exchange.

LISA FITHIAN: My name is Lisa Fithian. And Extinction Rebellion New York City just put a boat in the center of Times Square to draw attention to the climate emergency, the migration crisis, that nations are going underwater, people are dying. So, dozens and dozens of people are getting arrested. Some have locked down to the boat, glued their bodies to the boat. And we’ve shut down this area for now.

JACK MAGAI: My name is Jack Magai, and I’m from Troy, New York, three hours north of here. And I’m here because the normal political process hasn’t been working to make the changes that we need to do, that we should have done very gradually over three decades, to take care of the increasing CO2 levels, simple as that. And so, we are kicking it up so that the processes will happen. And unfortunately, they have to happen very fast, which is going to be uncomfortable for a lot of people. And this is demonstrating the discomfort that we’re going to have to go through.

MARÍA TARACENA: And you’ve superglued yourself to this boat.

JACK MAGAI: That’s right, with one hand. And then I’m locked through this tube to a partner on the other hand.

GREGORY SCHWEDOCK: My name is Gregory Schwedock. And the importance of this action is that we’re talking about we’re in the middle of the sixth mass extinction. This is life on Earth as we know it. This isn’t like whether we’re going to take our car to the car wash or not, like The New York Times likes to report. This is life and death. There is no — unfortunately, life is — is extremely clear right now, because it’s an exciting time that we know what we have to do. We have to disrupt. We have to put business as usual on notice that life can no longer go on like this, destroying our world.

GREGORY SCHWEDOCK: Well, clearly, it’s a place where a lot of people are, right? Because we need to wake up the world. This is a global rebellion right now. This is the beginning of the largest global disruption that the Western world has ever seen. So we’re going to put it on notice that business as usual is no more.

MARÍA TARACENA: How long are you prepared to stay here?

GREGORY SCHWEDOCK: We’ll stay here until we’re arrested. We have people superglued on and chained on.

POLICE ANNOUNCEMENT: Since you have refused to leave the roadway, you will be placed under arrest on the charge of disorderly conduct. If you do not cooperate and accompany the arresting officer…

ISABEL: My name is Isabel. I’m a student at NYU, and I’m incredibly scared at the state of our world. And we’re in the middle of a sixth mass extinction, and we have to act now. Clearly, just posting on Facebook and tweeting about it is not creating any change. And the only way to create change is to stop business as usual, so that leaders listen and create policies and Green New Deals.

POLICE ANNOUNCEMENT: Since you have refused to leave the roadway, you will be placed under arrest on the charge of disorderly conduct. If you do not cooperate and accompany the arresting officer to the prisoner transport vehicle, or if you resist arrest, you may be charged with additional crimes.

ERIN WILSON: My name is Erin Wilson, and I was inspired when I saw the Amazon rainforest on fire. We’ve been in a climate crisis for years now, but that kind of really got me thinking that I needed to be a part of something to help stop this.

MARÍA TARACENA: And can you describe — you’ve superglued yourself to this boat.

ERIN WILSON: Yes, I am superglued. Both my hands are superglued, and one of my hand is handcuffed. So, I’ll be here for a while.

UNIDENTIFIED: It is, yeah.

LINUS ROACHE: And that’s the message of this.

LINUS ROACHE: It really is emergency. We all need to wake up. We’re all in deep denial. And it’s a lot to bear. It’s an existential threat. It’s challenging all of our futures, our children’s futures. And now is the time to wake everybody up, including ourselves. And if it takes this kind of action, we’re sorry for the inconvenience. In the name of love and peace, but in radical change, it needs to happen now.

EXTINCTION REBELLION PROTESTERS: The waters are rising, and so are we!

MARÍA TARACENA: And I saw there were flags on the boat, and some of the activists were holding flags. Can you tell us a little bit about what that — the symbolism of that?

LISA FITHIAN: Those are the flags of the nations that are risking going underwater, that are facing serious climate migration crises, again, trying to bring attention to the fact that people all around the world are being devastated by what’s happening. We have a lot of privilege in this country, and we’re not feeling it quite as badly as some nations that are literally starting to go underwater.

MARÍA TARACENA: And some people are getting arrested. Can you describe what’s happening right now and how this action came to be? Tell us a little bit about the decoy rally that was happening in front of Fox News, as well.

LISA FITHIAN: Well, there are very different people who are profiting off of this climate disaster and who are profiting from Trump’s, you know, greed and lies. Fox News is one of them. So we had a public rally there this morning to try and put some pressure on those institutions to start telling the truth about this climate emergency.

But then, people from around the city, an act of conscience, you know, have been signing up and getting involved and being trained in nonviolent action and being willing to put their bodies on the line for — to try and make a change here. So, but people from many walks of life are just coming out and joining this growing movement. And many of them have never been arrested before, who are like willing to sit down in the street. It’s a really amazing and powerful thing, what people are willing to do right now.

And we hope everybody will start joining in. The more people that join this movement and tell our governments to take radical action to address climate emergency, tell the media to start telling the truth, to start cutting back on fossil fuel extraction, the quicker we’re going to resolve this, and hopefully save life on Earth, on this planet.

LISA FITHIAN: Well, capitalism is the root of so much of the problem — profit, consumerism, right? There has not — capitalism has not always existed. There are many ways for us to organize our society, without 1% of the people making, you know, all the money and the rest of us struggling to survive. And that’s part of what we have to understand, is that we need to rearrange our society — right? — to basically meet needs and to lift everybody out of poverty and everybody that’s facing rising waters. 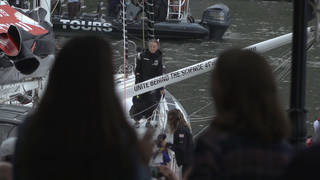