The House of Representatives voted Thursday to formalize the impeachment process against President Trump. The probe centers on whether Trump withheld military aid to Ukraine to pressure Ukrainian President Volodymyr Zelensky to investigate Trump’s political rival Joe Biden and his son Hunter, who served on the board of Burisma Holdings, a Ukrainian energy company. On Wednesday, House Democrats requested that Trump’s former national security adviser John Bolton testify. We speak with California Congressmember Ro Khanna, who says the time is right to impeach the president.

AMY GOODMAN: This is Democracy Now!, democracynow.org, The War and Peace Report. I’m Amy Goodman, with Nermeen Shaikh, as we bring you Part 2 of our discussion on impeachment.

NERMEEN SHAIKH: The House is holding a historic vote today to formalize the impeachment process against President Trump. The probe centers on whether Trump withheld military aid to Ukraine to pressure Ukrainian President Volodymyr Zelensky to investigate Trump’s political rival Joe Biden and his son Hunter, who served on the board of Burisma Holdings, a Ukrainian energy company.

AMY GOODMAN: As the House votes today, lawmakers are continuing to question key Trump administration officials behind closed doors. The top Russia official on the National Security Council, Tim Morrison, who’s on the verge of resigning, is scheduled to testify on Capitol Hill today. On Wednesday, House Democrats requested Trump’s former national security adviser John Bolton testify. His lawyer said he will only testify if he gets a subpoena.

We’re going to start there, as we continue our conversation with Silicon Valley Congressmember of California Ro Khanna. Can you talk about the significance of getting John Bolton, who was essentially ousted as the national security adviser of Donald Trump, extremely hawkish on foreign policy — getting him to testify and his lawyer saying he’ll only do it under subpoena?

REP. RO KHANNA: Well, it’s going to be very, very risky for the president. People know that I have been very critical of John Bolton. I mean, he was the architect of the war in Iraq. He has undermined our peace negotiation in North Korea. He’s been calling for a war in Iran. That said, he’s a Yale-educated lawyer, and he’s very careful. And the reports that he may have memorialized his objections to withholding aid from Ukraine is very significant. And so the questions is — the questions are: What did he tell the president in terms of the illegality of this scheme? Why did the president not listen to his advice? Was he concerned that the administration was doing something blatantly illegal in pressuring Ukraine to investigate Joe Biden?

REP. RO KHANNA: Well, Nermeen, again, based on the public reporting, it seems that there are numerous witnesses who are validating the same basic storyline, that this was not just the president in one call asking Zelensky to look into Biden, this was a pattern over months, led by Giuliani and the president, to put pressure on Zelensky to call for a public investigation into Biden to embarrass Biden. I mean, why else would the president want Zelensky to have a press conference to do this? He wanted to hurt his political rival, and that there was conditions placed on Ukraine, the condition being that the president wouldn’t even take a meeting unless Zelensky had this investigation announced and launched, and, of course, that the military aid would be restricted unless Zelensky launched this investigation. It is so obvious, the criminality, really, of the scheme.

AMY GOODMAN: So, I want to ask you about the content of what some of those who have testified have said, because people, for example, in your state, in California, under extreme state of emergency, might be fleeing fires and not really paying attention in Washington. On Tuesday, Lieutenant Colonel Alexander Vindman, the top Ukraine expert on the National Security Council, telling congressional lawmakers that the White House transcript of July 25th phone call between President Trump and Ukraine’s President Zelensky had omitted key words and phrases. Explain what this means. What took place, for people — just the actual story of this, what Vindman noted in the transcript and what he tried to do, he himself blowing the whistle, trying to take the transcript back to the Security Council to fill in the blanks, he says?

So now you’ve had, according to public testimony, Vindman, Charles — of Taylor, Ambassador Taylor, and the president’s own aides and ambassadors basically testifying that Rudy Giuliani had come up with this scheme to put pressure on Zelensky to announce an investigation into Joe Biden. And the thing is that the president has basically admitted this. I mean, the president has bragged on national television that he wanted Zelensky to have this investigation. And the question really comes down to whether you believe that that is wrong, whether you believe a leader, the president of the United States, can ask a foreign leader to investigate his political rival.

NERMEEN SHAIKH: Well, Congressman Khanna, I want to ask you about your own position on impeachment. In September, The Hill ran an article titled “Ten notable Democrats who do not favor impeachment.” You were on that list. What made you change your mind?

REP. RO KHANNA: Well, I was always with the speaker, that these acts, even in the Mueller report, were very, very disturbing and impeachable, but before I would vote for a formal impeachment inquiry, I wanted us to build the evidence and build the case with the American public. And that was the speaker’s strategy. And I think that it’s been vindicated. Now the American people are behind us. Now we have the votes in the Democratic Caucus, where it’s not just progressives voting for impeachment, but the vast majority of the Democrats. I think we will only lose a few votes of Democrats. And so, for me, it wasn’t a question of whether the president committed impeachable acts. I believe that Bob Mueller concluded he did. It was more a question of building the case with the American people and having the vote at a time where we would get a majority.

AMY GOODMAN: And so, tell us — take us through what happens next, after this vote today. It’s a Democratic-run House, of course, so they’re going to vote to move forward with this next phase of the impeachment inquiry. Explain what this allows you to do in terms of legally questioning people, and the rights it also bestows on the president of the United States, who’s the one being investigated.

REP. RO KHANNA: Well, now it will turn to a public phase of the investigation. So far all of the investigation has been behind closed doors, though with Republicans present and with due process rights. Now the public is going to get to hear from key witnesses. And so, the Intelligence Committee, under Adam Schiff, will call some of the key witnesses, like Ambassador Taylor, to share their testimony with the American public. I imagine that that will be a few-week process. And after that, then the evidence is all sent to the Judiciary Committee, where Jerry Nadler, who is the chair of the Judiciary Committee, will, with his colleagues, draw up articles of impeachment. The frame, the main part of the articles of impeachment, will focus on the president calling on Zelensky to investigate Biden, but there may be other parts to the articles of impeachment, based on the Mueller report and obstruction of justice. Then those articles come to the Congress, and we will all vote on those articles. It’s important to understand that the president’s counsel will have an opportunity to be represented in these hearings, to be represented in presenting their perspective, and Republicans will be able to question the witnesses and make their case, as well.

AMY GOODMAN: Before we leave, Congressmember Khanna, we wanted to get your final comment on the passing of Elijah Cummings. On Friday, former President Barack Obama praised the longtime Congressmember Elijah Cummings at his funeral in Baltimore, after his body lay in state in the U.S. Capitol. Cummings was the first African-American lawmaker to receive the honor. He spent decades championing the rights of African Americans and the poor, first as a civil rights activist, later as a Maryland state legislator, before being elected to represent his Baltimore district and the House of Representatives 13 times. This is President Obama remembering him.

BARACK OBAMA: Elijah Cummings was a man of noble and good heart. His parents and his faith planted the seeds of hope and love and compassion and righteousness in that good soil of his. He has harvested all the crop that he could, for the Lord has now called Elijah home to give his humble, faithful servant rest. And it now falls on us to continue his work, so that other young boys and girls in Baltimore, across Maryland, across the United States and around the world might too have a chance to grow and to flourish.

AMY GOODMAN: So, that was former President Barack Obama speaking at the funeral of Elijah Cummings on Friday. Congressmember Elijah Cummings served as chair of the House Committee on Oversight and Reform. Congressmember Ro Khanna, you served on that committee with him. If you can talk about his significance and his legacy? Of course, if the impeachment hearings continue, he would have played an absolutely key role.

REP. RO KHANNA: Well, President Obama gave a beautiful tribute to a beautiful and noble man. I mean, Elijah Cummings was the American story, the son of sharecroppers. President Obama recounted how his father would take Elijah Cummings as a boy to see the airplanes, and he told Elijah Cummings that they couldn’t afford to fly but one day Elijah Cummings would fly. And he did fly. He soared in the United States Congress. I remember when we were having a hearing with Michael Cohen. He pulled aside all of the Democrats, and he said, “Do not grandstand. Do not try to get on television. Be worthy of the moment. The weight of history is on you. Hundreds of years from now, people will ask what did we do.” And he enjoyed a respect from his Republican colleagues, as was evidenced by the fact that both Jim Jordan and Mark Meadows were present in — at his funeral. And in the House chamber, when people spoke about Elijah Cummings after his passing, there were tears not just on the Democratic side, but also on the Republican side. He exuded decency. He exuded a sense of purpose.

To see Part 1 of our discussion with him about PG&E turning into a real public utility, talking about the fires in California, and U.S. soldiers being sent to so-called protect the oil fields of Syria and Saudi Arabia, go to democracynow.org. I’m Amy Goodman, with Nermeen Shaikh. Thanks so much for joining us. 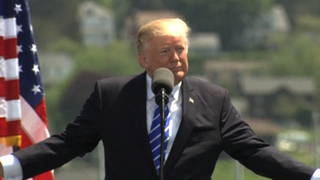