Several local candidates across the country made history. In Scranton, Pennsylvania, Paige Cognetti was elected as the first woman mayor after running as an independent despite being a registered Democrat. She’ll also be the first mayor-elect to give birth. Her child is due in December. Ghazala Hashmi became the first Muslim woman elected to the Virginia Senate after winning a suburban Richmond district. And Danica Roem made history for a second time, becoming the first out transgender person to win reelection to a state legislature, after defeating an anti-LGBT Republican candidate to represent the 13th District in the Virginia House of Delegates.

We speak with John Nichols, a political writer for The Nation.

StorySep 13, 2019Medicare for All: Sanders & Warren Defend Plan to Expand Healthcare Coverage to Everyone

AMY GOODMAN: This is Democracy Now!, democracynow.org, The War and Peace Report. I’m Amy Goodman. Results are still coming in around the country after Tuesday’s elections, with major wins for Democrats in several crucial states. In Virginia, Democrats have gained control of both houses for the first time in a quarter of a century. In Kentucky, Democratic challenger state Attorney General Andy Beshear has claimed victory over Trump-backed Republican incumbent Matt Bevin in a tightly contested race for governor. Bevin was a deeply unpopular governor who sparked statewide teacher strikes after he threatened to cut pensions. Beshear campaigned on promises to expand Medicaid and boost teacher salaries and pensions. He addressed supporters Tuesday night.

AMY GOODMAN: Matt Bevin has so far refused to concede. The upset victory came despite President Trump hosting a rally in Kentucky for Bevin on Monday night.

PRESIDENT DONALD TRUMP: And if you lose, they’re going to say, “Trump suffered the greatest defeat in the history of the world. This was the greatest.” You can’t let that happen to me!

Well, for more on the elections, we go to Madison, Wisconsin, where we’re joined by John Nichols, political writer for The Nation. His most recent piece is “The 'Bernie Sanders Slate' Is on Today’s Ballot.”

Welcome back to Democracy Now! John, why don’t you just go through each of these races? And, of course, we have more upsets to talk about.

JOHN NICHOLS: There is a lot to talk about. It was a pretty remarkable night. And what happened in Virginia is a huge deal. One of the things we talk about when you look at states is the term “trifecta control.” That means that you control the governorship and both houses of the state legislature. In Virginia, for the Democrats, that has not happened for a long time. But last night they got it. What this means is, because they have a Democratic governor and a actually quite progressive — not all the way progressive, but quite progressive — Democratic Legislature, you’re going to see real openings to do all sorts of things that have been blocked for years in Virginia: voting rights initiatives, some labor rights, potentially even endorsing the Equal Rights Amendment, which would be a big deal because there are people still pushing to move that across the line nationally. So the Virginia win is a big, big deal. And it can’t be — it should not go unnoted that people that Republicans targeted and conservatives targeted intensely, folks like state Delegate Lee Carter, a Democratic Socialist, with whom Bernie Sanders campaigned on the night before the election — Lee Carter won, and he won very easily. So, too, did a multiracial, multiethnic slate of Democratic contenders. So this was a big win.

AMY GOODMAN: But let me stay in Virginia for one sec —

JOHN NICHOLS: Oh, sure. Of course, of course.

AMY GOODMAN: — for some other very interesting races. The Democrat Juli Briskman, the woman who made headlines in 2017 for flipping off Trump’s motorcade from her bicycle and was fired, was elected to a local county board of supervisors, in Loudoun County, the Board of Supervisors. And then, Democrat Shelly Simonds handily defeated Republican incumbent David Yancey for a rematch in the House of Delegates. The same two candidates had tied before in 2017, when Yancey was then handed the seat by a lot drawing — his name picked randomly from a bowl. Also in Virginia, Democrat Ghazala Hashmi became the first Muslim woman elected to the state Senate.

JOHN NICHOLS: Yes. I mean, the results there are striking. Democrats in Virginia really were celebrating all over the place. They couldn’t keep up with the wins as they came through. But I would say, for many people, the icing on the cake was that victory in Loudoun County. There was that iconic photo of this bicyclist flipping off the president of the United States as his motorcade passed by. She is now an elected official. And what’s significant is, on Tuesday night, she won, and it’s quite arguable that Donald Trump lost. So, the playout on that is a rich one.

AMY GOODMAN: So, let’s go on to Kentucky.

JOHN NICHOLS: Yeah, of course. The Kentucky race is a huge deal, because Kentucky has been trending very, very Republican. And we shouldn’t underestimate the fact that Republicans won quite a few races in Kentucky on Tuesday. But in the governor’s race, there was an all-in effort by President Trump to nationalize the race, to make it about impeachment. And that’s a big deal for two reasons. Number one, it’s a test of voter sentiment and how powerful that issue is. Number two, Kentucky is the home of Senate Majority Leader Mitch McConnell. And McConnell actually appeared with Trump on the eve of the election. And Trump flew in to Lexington, Kentucky, had a major rally, in which, as your clip noted, he said, “Don’t let them do that to me,” or, you know, he basically pleaded with the voters of Kentucky to protect him from impeachment by reelecting Governor Matt Bevin.

Bevin is an unpopular governor, but at the end of the race there was a lot of folks who thought he would pull off a victory. As it turned out, he didn’t. And one of the reasons that he didn’t win is because Andy Beshear, who was well known — Beshear is well known, and he is the sitting attorney general in the state — but he did something that’s very significant.

AMY GOODMAN: And the son of a former governor.

JOHN NICHOLS: Of course, yes, and also, you know, a skilled politician. But he did something that’s very, very significant. He went into eastern Kentucky, rural counties, some of which had voted for Trump by a 40% margin, and he won more than a dozen counties that Trump had won. This is a big message for Democrats going into 2020.

AMY GOODMAN: So, you also have, of course, the issues of the teacher strikes and the hostility people felt toward Bevin around pensions and salaries, and you had Medicaid expansion, which Beshear was for.

JOHN NICHOLS: Yeah, and his father had been a big advocate for. And so, the family was well associated with that. You know, one of the things that will be said, Amy, is that Beshear won as a conservative Democrat. And there’s no doubt that he ran on local and state issues rather than, you know, tying in with all the national stuff, and he’s no great left-winger. But the truth is, he ran as a pro-labor, pro-public education, pro-abortion rights candidate for governor of Kentucky. He was supported by a lot of progressive forces in that state. And he prevailed. And he prevailed with a huge mobilization in Louisville and other urban areas, but also by cracking some of those suburban areas and, again, by flipping rural counties. And I think that education issue —

JOHN NICHOLS: Sure. Ranked-choice voting is a big deal. It’s really part of a package of reforms that we should be looking at around the country that allow you to open up the politics, to let people run who maybe don’t have as much money, who maybe come from a variety of backgrounds. Ranked-choice voting has broken through in the state of Maine, and it’s been a big factor there. Now New York City becomes the largest jurisdiction in the country to embrace ranked-choice voting. What that means is that you have some real potential in elections for candidates who maybe don’t have the biggest amount of money but who have a lot of popular appeal to build out a campaign seeking second-choice votes. You know, we could run down a list of campaigns in New York City in the past that have narrowly lost, maybe even somebody like Tiffany Cabán running for Queens DA, where if you had had ranked-choice voting, there’s a real chance they might have won. So this is a big deal.

AMY GOODMAN: In California, KTVU reports the closely watched district attorney in San Francisco race is too close to call. Suzy Loftus is leading Chesa Boudin by just 240 votes. That might change as people watch this today. Boudin was leading after the first round in the ranked-choice voting election, police pouring in a fortune against him.

JOHN NICHOLS: And there’s also — it’s important to know that there’s a lot of mail-in votes still to be counted there. So, when you’re looking at about roughly a 240-vote difference, that it’s, I think, I would argue, silly at this point to try and declare that race. It really is a genuinely too-close-to-call contest. And there will be probably — it may be several days before we know what happened there.

JOHN NICHOLS: That is a huge win. Philadelphia has a quirky law that reserves two seats — or, a couple seats on their City Council for minority-party candidates. It’s always, historically, gone to the Republicans. The Working Families Party decided to break what was really, in many ways, an old kind of insider political deal between kind of machine Democrats and machine Republicans. They ran candidates who said they really wanted to pull things to the left in Philadelphia, and some Democrats broke with their party to back and help these WFP candidates. This win is a big deal because it has the potential to not just help a third party have a breakthrough, but also to move Philadelphia City Council and Philadelphia politics even more to the left. And it’s a city that has been trending in some progressive directions.

AMY GOODMAN: We’re going to have to leave it there. John Nichols of The Nation, thanks so much.

AMY GOODMAN: And Happy Birthday to John Hamilton! I’m Amy Goodman. Thanks for joining us.

Medicare for All: Sanders & Warren Defend Plan to Expand Healthcare Coverage to Everyone 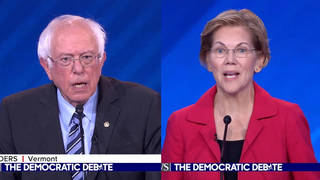 Medicare for All: Sanders & Warren Defend Plan to Expand Healthcare Coverage to Everyone