Indigenous Protectors Are Defending the Amazon and “Paying with Their Lives”

This week we’re on the road in Stockholm, Sweden, where we’re covering the 40th anniversary of the Right Livelihood Award, widely known as the “Alternative Nobel Prize.” One of this year’s recipients of the award is Yanomami indigenous leader Davi Kopenawa and the organization he co-founded, Hutukara Yanomami Association. The Right Livelihood Foundation has praised them for “their courageous determination to protect the forests and biodiversity of the Amazon, and the lands and culture of its indigenous peoples.” The award comes as indigenous forest protectors and uncontacted tribes in Brazil are increasingly under attack. Last month an indigenous forest protector named Paulo Paulino Guajajara was shot dead in the Amazon by illegal loggers. It was the latest incident in a wave of violence targeting indigenous land protectors since the election of Brazil’s far-right President Jair Bolsonaro last year. One month ago, human rights groups warned in an open letter that the Amazon’s last uncontacted indigenous people face “genocide” amid raging fires and mounting incursions into their territories. Brazil’s Indigenous Missionary Council says the number of invasions of indigenous territories has doubled under Bolsonaro — with more than 150 such incidents since January. We speak with Fiona Watson, advocacy and research director for Survival International. The organization is a 1989 winner of the Right Livelihood Award for its work protecting the Amazon.

AMY GOODMAN: This is Democracy Now!, democracynow.org, The War and Peace Report. I’m Amy Goodman. We are broadcasting from the studios of Stockholm’s Open Channel, Stockholm’s only independent, grassroots, non-commercial TV station committed to free speech. The Open Channel here in Sweden carries Democracy Now! four times a day, and it’s great to be with our colleagues here.

Well, the United Nations climate summit, known as COP25, opened in Madrid, Spain, Monday — supposed to be held in Santiago, Chile, but the Chilean government canceled the summit amidst massive protests against economic inequality and austerity. But even before Chile, this year’s U.N. summit was supposed to be held in Brazil. In one of far-right President Jair Bolsonaro’s first acts in office, he canceled the summit. His foreign minister has described the climate change as a Marxist plot.

Well, for more, we’re joined, in these last few minutes, by Fiona Watson, advocacy and research director for Survival International. That’s the group that won the Right Livelihood Award back in 1989.

We welcome you to Democracy Now! It’s great to see you, Fiona. We only have a few minutes right now, as we played live Greta Thunberg making landfall in Lisbon, Portugal, making her way to the U.N. summit. But talk about what the indigenous people of Brazil face right now.

FIONA WATSON: Well, the indigenous people in Brazil are literally on the frontline. And we’ve seen, with the death of Paulo Paulino Guajajara, an Amazonian forest guardian whose group of people were standing up to the loggers and the invaders, they are paying literally with their lives. They’re also paying with their livelihoods and their resources. Their land is being plundered. Invasions of indigenous territories since Bolsonaro took power are up by 40% since last year. Deforestation is up 92%.

So these are really shocking figures, and things look set to get worse because Bolsonaro’s agenda, he’s made it quite clear, his very racist agenda against indigenous peoples, these are the people who — as Davi Kopenawa, who is a winner of this year’s Right Livelihood Award, a Yanomami Indian, says, the indigenous people are not only standing up protecting the Amazon forests for themselves, but for humanity, because of the crucial role it plays in helping to regulate climate change.

AMY GOODMAN: Talk about uncontacted tribes. What does that mean?

FIONA WATSON: That means people who live mainly in the Amazon region who have no contact with surrounding society. They may have sporadic contact with neighboring tribes, but very little. These are usually people who, several hundred years ago, have escaped things like, say, the rubber boom, the atrocities, the enslavement. So it’s a means of self-preservation and protection to choose to live as far away as possible in isolation. And these are the most vulnerable people on the planet.

And under Bolsonaro, they are coming under increasing attack. We just heard a few days ago that the indigenous affairs department of Brazil, FUNAI, has brought out a bill saying that employers who — their field staff is supposed to protect indigenous peoples and monitor the territories of uncontacted — will not now be going into territories that have not been recognized officially. That means at least 10 uncontacted groups are now severely at risk of attack.

AMY GOODMAN: Can you talk about the significance of the Right Livelihood Award back when your group, Survival International, got it in 1989, and now this year? In fact, just after this broadcast, we’re going immediately to interview Davi Kopenawa, who, together with the Hutukara Yanomami Association, are receiving the award this year at the big ceremony on Wednesday here in Stockholm.

FIONA WATSON: I think it’s a very important award, because what it does is it recognizes people who aren’t generally well known, who are working all around the world, grassroots communities, all sorts of people, who are fighting for a better world, for social justice, etc. So, by getting this award, it gives them a platform, an international platform. And in today’s globalized world, that’s extremely important. And it acts like a big family. So there’s a lot of sort of rich, if you like, sort of cultural mixes within the Right Livelihood family. And when Survival won it in 1989, we in fact invited Davi to accept it on our behalf in the Swedish parliament. And this brought huge attention onto the Yanomami issue, because they were facing genocide. Twenty percent of their population died in seven years in the late ’80s due to a gold-mining invasion and the diseases that the miners brought in. This was genocide. And it brought that issue to the public, and from that, after that, their land was recognized.

AMY GOODMAN: And the significance of Bolsonaro canceling the U.N. summit this year in Brazil? Now it will take place in Spain, where we’re headed in the next few days.

FIONA WATSON: I think that says everything. Here is a person, this far-right guy, who denies that climate change is happening, who has a very racist agenda, who calls indigenous peoples lazy, dirty, in the way of so-called progress. In fact, these are the people, I think, who are crucial to the future of our planet, who have this tremendous knowledge. And they are the ones who are standing up fighting for a better world for all of us. We must support them.

AMY GOODMAN: I want to thank you so much, Fiona Watson, with Survival International. The group won the Right Livelihood Award in 1989.

That does it for our show. We’ll be broadcasting from here in Stockholm for the next two days, then on to Madrid for the U.N. climate summit. Special thanks to Stockholm’s Open Channel for hosting us here. I’m Amy Goodman. This is Democracy Now!, democracynow.org, The War and Peace Report. Thanks so much for joining us. 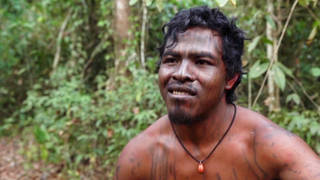