Why Are Some of Spain’s Biggest Polluters Sponsoring the U.N. Climate Summit?

A group of climate activists walked out of a panel at the U.N. climate summit in Madrid on Thursday to protest the presence of Shell, BP and Chevron. Representatives from the oil companies were taking part in an event organized by the International Emissions Trading Association. This comes as the Spanish government is facing criticism for reaching out to Endesa, Spain’s biggest corporate greenhouse gas polluter, to sponsor the U.N. climate talks. We speak with Pascoe Sabido, a researcher and campaigner for the Corporate Europe Observatory, who has been organizing toxic tours of Madrid to expose the corporations and financiers driving the climate crisis.

AMY GOODMAN: That’s right. Democracy Now! is in Madrid for the next week, and we’ll be broadcasting throughout the week from inside and outside the U.N. climate summit, from the suites to the corporate suites to the summit floor. I’m Amy Goodman.

A group of climate activists walked out of a panel at the U.N. climate summit, which began earlier this week here in Madrid, on Thursday to protest the presence of Shell, BP and Chevron. Representatives from the oil companies were taking part in an event organized by the International Emissions Trading Association. Laurie van der Burg of Friends of the Earth Netherlands took part in the walkout.

AMY GOODMAN: This comes as the Spanish government is facing criticism for reaching out to Endesa, Spain’s biggest polluter, to sponsor the U.N. climate talks.

Our next guest has been organizing toxic tours of Madrid to expose the corporations and financiers driving the climate crisis. Pascoe Sabido is a researcher and campaigner for the Corporate Europe Observatory.

We welcome you back to Democracy Now!, Pascoe.

AMY GOODMAN: It seems we see you almost every year at these U.N. climate summits, either in the streets or breaking up some side conference that’s happening inside. Talk about this first action that you’ve engaged in.

PASCOE SABIDO: Yeah. I mean, I think it’s shocking, the fact that companies like Shell, BP and Chevron, the very same culprits that have been causing this climate crisis — and let’s not forget, trashing communities and the environment everywhere they go — are here pretending to be part of the solution. And what we heard was equally shocking. I mean, they’re trying to turn forests, ecosystems and nature into the new carbon markets. This is a disaster for all of us, especially when we want to keep temperature rises to a maximum of 1.5 degrees. This is just not feasible with their plans.

So, the action itself was quite symbolic. It was, we covered our ears — stood up, covered our ears, made sure we couldn’t hear the rubbish that Shell was spouting, and then walked out. But this is not the only event that Shell is organizing. It’s involved in multiple events throughout this summit, and it’s just one of many examples of the sort of corporate involvement that we’re seeing more and more of here.

AMY GOODMAN: Well, you’ve just come out with a report on the corporate sponsorship of the U.N. climate summit. Talk about what you found.

PASCOE SABIDO: Indeed. So, it came out today with Corporate Accountability, OMAL and Ecologistas en Acción. And it shows that in fact the biggest polluters are sponsoring these climate talks, from fossil fuel companies, the banks that finance them, as well as many others, like airlines. And so, I mean, what we saw is, yeah, it’s not just the biggest polluters who are using this for huge greenwashing opportunities. You’ll see their logos all over the COP. But they’re also using this to influence the talks themselves, to gain access to the negotiations through events, getting negotiatiors to come to events, to cocktail parties and other forms of privileged access.

And this is, I mean, year after year – you said I’ve been here year after year, and the problem seems to get worse year after year — that we have these companies completely wrapping themselves in the colors of the U.N., pretending to be green, whilst, underneath, the dirty reality is they’re climate criminals. But also what we showed in this report is lots of these companies have been involved in huge human rights abuses and workers’ abuses across Latin America, which I think underlines the neocolonial nature of climate change and its colonial roots, because a lot of these companies from Spain are very active in ex-colonies in Latin America, keeping those relationships going.

AMY GOODMAN: Well, talk about the electric company co-sponsoring the summit and what that means. It’s the largest greenhouse gas emitter in Spain?

PASCOE SABIDO: Completely. So, Endesa, which is — they produce electricity from coal, gas and oil. It’s Spain’s single biggest polluter when it comes to emissions, and is involved in all sorts of terrible projects, not just here in Spain, but also in Latin America. So it’s involved in gas over there, gas production. Gas, in fact, it’s little known, but it’s as bad for the climate as coal. It’s also involved in big hydroelectric, which have led to huge indigenous rights abuses, as well, and big accusations of corruption.

But it’s also joined by its fellow big electricity company, Iberdrola, which for the last few years has really been trying to give itself a green image. But we looked at the — in our report we came out with, in 2018, it produced more electricity from fossil gas than it did from wind and solar combined. And same goes for its investments last year. Two-thirds were into new gas. So, yeah.

AMY GOODMAN: So, the Spanish government took this project on like in the last few weeks, because Chile canceled the summit.

AMY GOODMAN: You’re very critical of them turning to the biggest polluters to co-sponsor the event. How do you think something as large as this, tens of thousands of people coming into a community, planned in the last few weeks — how could it be alternatively financed?

PASCOE SABIDO: Yeah. I mean, I think we first have to go to who’s actually financing it. Is it the corporations, who have been approached? Because the Spanish president went to what’s called IBEX 35, the 35 biggest listed companies on the Spanish stock exchange, and begged them to sponsor, begged them for 2 million euros each. And, in fact, what he did is he offered a 90% tax break to these companies. So it’s not these corporations. In fact, it is the Spanish taxpayer who’s paying for these talks, who’s paying for the greenwashing and paying for the lobbying access.

The way it needs to happen, in fact, is these companies need to, A, pay their taxes — it would be a great start. But also, we’re seeing vulnerable communities across the world, those who did the least to contribute to this problem, suffering the consequences. And the companies that have caused it, rather than receiving tax breaks, rather than receiving huge fossil fuel subsidies, should be held liable for their actions and should be made to pay.

AMY GOODMAN: So, right now, here at the U.N. climate summit, do you see any improvements? I mean, the COP was held three times in Poland, which could be called “coal land.” And the last one, Katowice last year, that is the heart of coal land in Poland. The convention center where the climate summit was held was modeled on a coal mine.

AMY GOODMAN: Do you see any improvement?

PASCOE SABIDO: What we do see is a bit more fear, shall we say. So here in Spain what you see, all of these big dirty energy companies are pretending to be green. Endesa bought the front pages of pretty much every Spanish newspaper to claim that it was becoming a climate leader. But what we’re not seeing is action. We’re not seeing money on the table for countries and communities who need to face the consequences of climate change. We’re not seeing real solutions. We’re not seeing real ambition.

So, in fact, despite the hundreds of thousands, millions of people out in the streets, it feels there’s a huge disconnect between what people are demanding — people are demanding real solutions — and what our governments are doing, who keep listening to these same corporations. And this space, ultimately, it’s a symptom of a bigger problem, because the problem lies at national level. And our national governments, our governments are in bed with these same corporations.

AMY GOODMAN: Here in Spain, the Spanish government gives fossil fuel electricity companies hundreds of millions of dollars, in euros, in subsidies to the companies. The International Monetary Fund estimates globally governments subsidize the fossil fuel industry to the tune of $5.2 trillion annually.

AMY GOODMAN: What would that look like if that was subsidies given to wind, to solar, to biothermal?

PASCOE SABIDO: This would pay for it. That much a year? We’re looking — of course, I mean, to pay for — if we had done this 10, 20 years ago, that would probably be enough. But what we’re seeing now is the amount that’s needed for communities and countries already facing typhoons, droughts, fires, that’s already covering that figure. But if that figure went towards clean energy, went towards a real sort of renewable transformation, we could change our economic system. But, unfortunately, our governments are not going to do so, because that’s going to really impact the bottom lines of these same dirty energy companies.

AMY GOODMAN: Well, Pascoe Sabido, I want to thank you so much for being with us. We’ll be taking a toxic tour with you tomorrow. In five seconds, what does a toxic tour look like?

PASCOE SABIDO: We’re going to go around Madrid’s streets to the dirtiest companies involved in this COP, starting 1:15 at the stock exchange in Madrid. Join us.

AMY GOODMAN: And we’ll bring you that next week. Pascoe Sabido, researcher and campaigner for the Corporate Europe Observatory.

And that does it for our show. We’ll continue broadcasting from Madrid all next week at the U.N. climate summit, COP25. Tell your friends. Spread the word. That does it for our show. Special thanks to our Democracy Now! crew here in Madrid: John Hamilton, Denis Moynihan, Charina Nadura, Libby Rainey, Laura Gottesdiener, Nermeen Shaikh — and to Miriam Barnard. I’m Amy Goodman. Thanks for joining us. 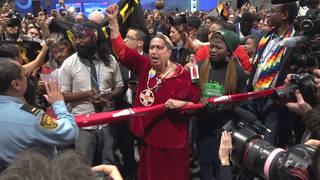