“The System Is Rigged”: Democrats Drop Corporate and PAC Money Amid Pressure from Progressives

We look at the growing push for lawmakers to refuse money from corporate political action committees, as more than half of the Democrats newly elected to Congress have vowed not to accept such donations. We speak with Congressmember Nydia Velázquez of New York, a long-term legislator who has stopped taking corporate PAC donations. “In order to return trust [to] our democratic institutions, we need to … allow for the voters to feel that their voices are heard and that they don’t have to write a big check in order to gain access into our congressional offices,” she says.

REP. NYDIA VELÁZQUEZ: Well, Juan, when I won the first time, I won against the establishment, and I defeated an entrenched, 18-year politician who basically wasn’t representing the interests of the community and the district that he represented. But for many of the first terms in Congress, I barely got any corporate money. They saw me as too liberal. And what I’m doing right now is coming home. Even when I accepted corporate money, I was found by independent analysis to be one of the most liberal in voting against the interests of corporate America and financial institutions as a member of the Financial Services Committee. Maxine Waters, Keith Ellison, myself and some others were found to be one of the most progressive in that committee.

So what I’m doing now is, because of so much—because there is so much distrust from my constituents and voters across the country, particularly since Citizens United ruling in 2010, so much money is coming to play in politics in our country that a lot of voters feel that the system is rigged, that the deck is stacked against them, especially with young people. We made a promise, a social contract with our young people, saying that if you play by the rules, if you work hard, you can make it in America. But the fact of the matter is that they graduate and they cannot find jobs, or they graduate with a huge student debt and a diploma on the other hand. So, what I’m doing is coming home. And I believe that face-to-face interaction is more effective, that in order to return trust in terms of our democratic institutions, that we need to go back to allow for the voters to feel that their voices are heard and that they don’t have to make a—write a big check in order to gain access into our congressional offices.

AMY GOODMAN: You know, it’s interesting, going back to when you won, Congressmember Velázquez, in a sense, back then, in the early ’90s, your overthrowing of the establishment, to the shock of so many, is very much reminiscent of what we saw this year with Alexandria Ocasio-Cortez, very much she was a replay of what happened with you back then.

AMY GOODMAN: But now you’ve been in office for more than a quarter of a century. And I’m wondering, in these final moments we have, as President Trump threatens to close the border, and possibly, AP is reporting, the name being floated around to be his, quote, “immigration czar”, Kris Kobach of Kansas. If you can comment on the significance of the closure of the border, what this would mean and how—what you’re doing in Congress right now to prevent that from happening?

REP. NYDIA VELÁZQUEZ: Well, Amy, it will create chaos. It will incentivize more people to leave their countries, to try to cross the border in the next few days. But also, it’s not a matter of safety and security; it’s also a matter of economic security. Trade is an important activity between our country and Mexico. And the Hispanic Caucus yesterday released some data that shows that more than $1.5 billion in trade happens through the border every single day. Those are big numbers. And what I am counting on is for the Republican members that represent border states to be proactively and publicly denouncing such a move. That is shortsighted. It’s ill-advised. And it will create a nightmare of epic proportions.

JUAN GONZÁLEZ: And in terms of the prospects of any kind of immigration legislation being passed by the Congress to address what everyone acknowledges is a broken immigration system, but yet somehow the previous Congress could not come up with legislation, what are your hopes this time around?

REP. NYDIA VELÁZQUEZ: So, just recently, two weeks ago, Congresswomen Lucille Roybal-Allard, Yvette Clarke and myself introduced HR 6, has been endorsed and co-sponsored by every Democratic member and Nancy—and the Democratic leadership. It is entitled the American and Promise Act, that will—the Dream and Promise Act. And it will provide a path to citizenship for both TPS holders and the DREAMers. As you know, close to half a million people are TPS holders. They have temporary status, from Haiti, from Honduras, Central American countries. Because of the earthquake, natural disasters or violence in those countries, we opened our system and allowed them to come into this country. Many of them, the average TPS holder has been in this country for 20 years. They have roots in our community. They contribute $4.6 billion to the GDP in wages and salaries. So this is not about who we are in terms of embracing immigrants into this country and the humanitarian aspect and the values that we hold dear, but it’s also an economic security and the contributions that they are making to our economy. So, the bill, already the Judiciary Committee held a hearing. I believe that it’s going to mark up the legislation soon, and that by May it is expected to be voted on in the House of Representatives.

AMY GOODMAN: Congressmember Nydia Velázquez, we want to thank you for being with us, Democrat from New York, served in the U.S. House of Representatives since 1993, first Puerto Rican woman to be elected to Congress, former the chair of the Congressional Hispanic Caucus.

This is Democracy Now! When we come back, President Trump flips again. He says he’ll push for Republican healthcare after the election, after weeks saying that they’re going to overturn Obamacare in his first term. We’ll speak with a mother of a daughter with severe disabilities, about what the overturning of Obamacare means. And then, where does Medicare for all fit in with this? We’ll speak with one of the leaders in the country of that movement. Stay with us.

As Trump Threatens Another Obamacare Repeal, Mother Warns That Losing ACA Would “Wipe Me Out”

NEXTAs Trump Threatens Another Obamacare Repeal, Mother Warns That Losing ACA Would “Wipe Me Out” 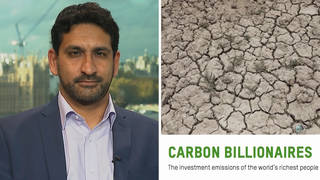