As the 2020 election race barrels forward with nearly 20 Democratic candidates, we speak with Nobel Prize-winning economist Joseph Stiglitz about the policy platforms of progressive hopefuls Elizabeth Warren and Bernie Sanders, including Warren’s plan to break up big tech companies and cancel student debt and Sanders’s commitment to democratic socialism, which Stiglitz compares to “what in Europe is called social democracy, sometimes called the welfare state.” Stiglitz has a new book out titled “People, Power, and Profits: Progressive Capitalism for an Age of Discontent.”

AMY GOODMAN: This is Democracy Now! I’m Amy Goodman, with Juan González. The Institute on Taxation and Economic Policy has found the number of large U.S. companies who paid nothing in federal taxes has doubled in recent years. The companies include Amazon, Netflix, General Motors, IBM, Chevron, Eli Lilly, Delta, Occidental Petroleum, Honeywell, Prudential, Halliburton, Whirlpool and Goodyear. Senator Elizabeth Warren recently introduced a proposal called the Real Corporate Profits Tax to force companies to pay a 7% tax on all profits over $100 million. Warren outlined the plan on MSNBC.

SEN. ELIZABETH WARREN: It’s just if you have more than $100 million in reported after-tax profits, the 100 millionth and first dollar should be taxed at 7%, and that just goes straight across the board. The simplicity of it is part of what makes it work so well and makes sure no giant corporation in this country gets away with paying zero, while small companies and families are having to pick up the ticket to run the country.

AMY GOODMAN: So, that’s presidential candidate Elizabeth Warren. And we hope she will join us on Democracy Now! We hope all those who are her friends, in her close circle, will hear that message, and she herself. But we are joined now by Nobel Prize-winning economist Joseph Stiglitz. His latest book, People, Power, and Profits. What about this?

JUAN GONZÁLEZ: That’s like an alternative minimum tax for corporations.

JOSEPH STIGLITZ: That’s right. And I actually think there should be a global minimum tax, because what is going on is that they’re avoiding not only taxes in the United States, but they’re looking around the world for places, like Panama and the tax paradises, to avoid taxes. Apple was particularly bad, where they shifted all their money into Ireland, from all their profits in Europe, and then did a special deal with Ireland so they basically paid almost no taxes, .02 or .2%—I mean, really very low, a real example of tax avoidance, almost at the level of evasion.

The point I want to make, the point that Elizabeth is making, is that our big corporations are showing the same ingenuity of coming out with good products—they’re showing that same ingenuity in avoiding taxes, and making sure that we have laws that allow them to do that. And she’s saying that’s wrong.

She’s also emphasized that it distorts our economy. It distorts our economy in two ways. Where business gets located is distorted, because you search for a tax haven. But it also gives these big companies an advantage over small corporations, over, you know, individual companies. And so, that’s not a level playing field. The big companies expand, not because they’re necessarily more efficient, but because they’re better at avoiding their tax obligations.

JUAN GONZÁLEZ: I’m wondering, the—Elizabeth Warren, particularly, has been rolling out a series now of proposals, some of them apparently very well thought out, because we have 20 Democratic candidates, but we have sort of a lack of their specifics of what they stand for. I’m wondering what your sense—

JUAN GONZÁLEZ: I’m wondering what you think about her student debt proposal and also her call to break up the big tech companies.

JOSEPH STIGLITZ: So, first of all, let me say, you know, that you should look at these proposals in two ways. She’s setting out a set of principles: We ought to have more progressive taxation and not let the corporations escape taxation; we ought to do something about the growth of monopoly power in our society; we ought to make sure that education is accessible to everybody, regardless of their income and of their parents. You know, these are basic principles which all Americans should subscribe to.

Then, the second thing is, here is a particular way we can implement that. And, you know, let’s all be—we all know that when we go to Congress, there will be a lot of discussion about how to do it, and hopefully during the primaries and the election, there will be a lot more discussion. But she’s putting forward the idea that these are doable ideas. These are not pie-in-the-sky. We can do it. We can get more progressive taxation, for instance, by a small wealth tax on those with more than $50 million. I mean, it’s not going to affect even the bottom 1%—I mean, the bottom 99% are not going to be affected. We’re talking about a fraction of the top 1%. So that’s one example.

AMY GOODMAN: And she’s—oh, go ahead on the student loan.

JOSEPH STIGLITZ: On the student loan thing, we have a student debt now of $1.5 trillion. It’s so large, it’s beginning to affect our macroeconomy. It’s affecting individuals’ lives. They can’t get—you know, buy a home, start a family, because of the debt. Now—

JOSEPH STIGLITZ: It’s a new form of indentured servitude. And so, we have to think about it in two parts. One, going forward, how do we make sure that a university education is affordable to everybody? And the second part is: What do we do with the backlog of $1.5 trillion?

Now, she has a particular proposal. It’s somewhat different from the one that I’ve been advocating. What I think is that you should have what I call contingent repayment. If your income is below a certain level, say, below $50,000, you don’t pay back anything. If it’s over $200,000, you might pay back 4%. And then you keep paying it back until you pay it all back, except after 25 years, you say, look at, you’ve done what you can to repay the debt, and we’ll write off the rest. One way or another, we have to deal with that legacy debt problem.

AMY GOODMAN: Let’s go to Bernie Sanders on Fox News, which was controversial in itself, but he wanted to address a Trump audience. He was speaking about democratic socialism.

SEN. BERNIE SANDERS: Democratic socialism, to me, is creating a government and an economy and a society which works for all rather than just the top 1%. It means ending the absurd inequalities that exist today. And I want to lay this out, because you’re not going to hear this much on Fox, and you’re not going to hear this much in the media, in general. And the American people have got to conclude whether we think it is appropriate and what America is about to have three families owning more wealth than the bottom half of the American society, 160 million people; whether it’s appropriate for the top 1% to own more wealth than the bottom 92%; whether it is right that 49% of all new income goes to the top 1%, when many people, Bret and Martha, who are watching this program, are working two or three jobs just to pay the bills.

AMY GOODMAN: So, that’s Bernie Sanders speaking on Fox. And again, we invite Bernie Sanders to be here on Democracy Now! at the table during this election cycle. Joe Stiglitz?

JOSEPH STIGLITZ: So, I think he’s given a good definition of what is called democratic socialism. Now, what Trump is trying to do is confuse people’s minds. Traditionally, socialism, you know, a hundred years ago, was about the ownership of the basic means of production. You didn’t hear a word about that from Bernie Sanders. He’s not talking about that old-style socialism. He’s not saying we want to bring Maduro, Venezuela, to America. That’s not what he’s talking about. What he’s really talking about is what in Europe is called social democracy, sometimes called the welfare state, sometimes—you know, it’s basically based on: We need systems of social protection; we need systems to make sure that we invest in our young people, invest in our infrastructure, invest in R&D; we invest in the future, protect the climate and protect the environment. In other words, we make our economy work for all Americans.

And the word I use is progressive capitalism. But, you know, is there any difference between my definition of progressive capitalism and what Bernie has called democratic socialism? No. It’s all trying to get at an economy that serves our citizens. And I’ve tried to emphasize there’s going to be a market part of this. And what Bernie is emphasizing, yeah, and there’s also going to be a part where the government is going to have to play a role. And I emphasize both of those in my book.

AMY GOODMAN: Joe Stiglitz, we want to thank you for being with us, Nobel Prize-winning economist, Columbia University professor. His latest book, out this week, People, Power, and Profits: Progressive Capitalism for an Age of Discontent.

That does it for our show. I’ll be speaking at University of California, Berkeley, at the Genetics and Plant Biology Building on Saturday at 6 p.m. We’ll be showing Four Days in Western Sahara: Africa’s Last Colony_ and having a discussion after. I’m Amy Goodman, with Juan González. Thanks so much for joining us. 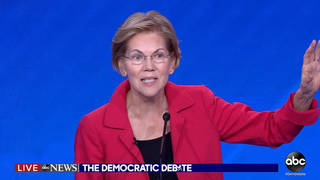