Angela Davis: I Would Like to Accept Birmingham Civil Rights Institute Award After BDS Controversy

In February, Angela Davis returned to her hometown of Birmingham, Alabama. She originally planned the visit to receive the Fred L. Shuttlesworth Human Rights Award from the Birmingham Civil Rights Institute, but the institute withdrew the award in January, soon after the Birmingham Holocaust Education Center sent a letter urging the board to reconsider honoring Davis due to her support of the Boycott, Divestment and Sanctions movement targeting the Israeli government and Israeli institutions. Facing swift and widespread outcry, the institute then reversed its decision and reinstated the award. While Angela Davis has yet to accept the award, she tells Democracy Now! she would like to accept it, but says it is not an individual decision to make. “I will take the leadership from those doing the on-the-ground work.”

AMY GOODMAN: Angela Davis, you returned to your hometown of Birmingham, Alabama, in February, originally planning the visit to receive the Fred L. Shuttlesworth Human Rights Award from the Birmingham Civil Rights Institute, but the institute withdrew the award soon after the Birmingham Holocaust Education Center sent a letter urging the board to reconsider honoring you, due to your support of the BDS movement, Boycott, Divestment and Sanctions movement, targeting the Israeli government and Israeli institutions because of the Israeli occupation. Facing swift and widespread outcry, the institute then reversed its decision and reinstated the award, but Angela Davis has yet to say if she will accept it. We followed you to Birmingham. It was a massive welcome for you as a Birmingham daughter. Thousands of people came out. We also interviewed the head of the Civil Rights Museum, who said she deeply hopes that you will come back to receive the award. What happened? What have you decided?

ANGELA DAVIS: Well, first of all, it was really a remarkable moment. And what impressed me so much was that especially black people, but also many white people, including Jewish people, stood up in support of the idea that Palestinians also deserve to be recognized for their human rights. It is not possible to believe in human rights but to exclude a given population. And, yeah, I would like to accept the Fred L. Shuttlesworth award, because I deeply respect the legacy of Fred Shuttlesworth, and the Birmingham Civil Rights Institute is a remarkable institution. There are some issues with the leadership that were expressed, of course, in the fact that the award was rescinded.

AMY GOODMAN: And three people on the board had to resign, after they returned—

AMY GOODMAN: —rescinded the rescinsion, if that’s a word—

AMY GOODMAN: —after they said, “Please accept the award.” So, do you plan to return? Have you—

ANGELA DAVIS: Well, I don’t see this as an individual decision. I’m taking my leadership from on-the-ground organizers in Birmingham who recognize that it’s their responsibility to assist in the transformation of the institute. So, I understand that there are meetings underway. Of course, the Mayor’s Office funds at least half of the budget. The mayor was in the forefront of challenging the rescinsion of the award. There is an organization, a sort of ad hoc group that came together, Birmingham Truth and Reconciliation Committee. They are in conversation with the leadership of the Civil Rights Institute.

AMY GOODMAN: Have you spoken to Andrea Taylor, the president and CEO of the Birmingham Civil Rights Institute?

*ANGELA DAVIS: Have I ever spoken to her? Or have I spoken—

AMY GOODMAN: Have you spoken to her since then?

*ANGELA DAVIS: I haven’t spoken to her directly. I’m waiting to see what the outcome of the meetings might be. And I will take the leadership from those who are doing the on-the-ground work.

AMY GOODMAN: Well, I think that’s some breaking news. And I thank you both for being with us. We will cover the rally today in defense of Ilhan Omar and bring that to our viewers, listeners and readers tomorrow on Democracy Now! I want to thank you, Angela Davis, author, professor, activist, professor emeritus at the University of California, Santa Cruz, author of many books, including Freedom Is a Constant Struggle: Ferguson, Palestine, and the Foundations of a Movement, and Barbara Ransby, historian, author and activist adviser to the Movement for Black Lives, one of the planners behind Black Women in Defense of Ilhan Omar. We’ll be there at noon outside the Capitol covering this event.

When we come back, in breaking news, Venezuelan opposition leader Juan Guaidó says a coup is underway in Caracas. We’ll get the latest. Stay with us. 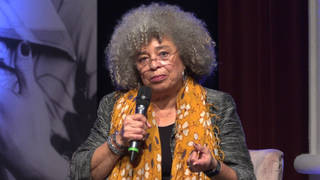